Autonomous vehicles: The question of liability 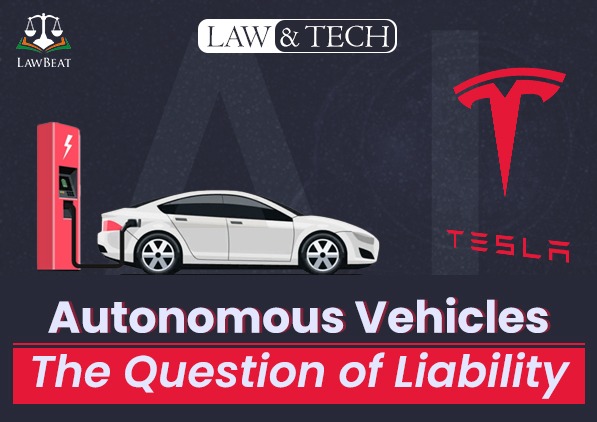 On 17th April’2021, Tesla, model S, was involved in a crash, wherein, two people died.[1] The Tesla car had an autopilot feature. The investigation about the crash is ongoing but the police believe that there was no one sitting in the driver’s seat.[2] Although Tesla’s website states that the current autopilot requires driver’s assistance,

“... Autopilot introduces new features and improves existing functionality to make your Tesla safer and more capable over time. Autopilot enables your car to steer, accelerate and brake automatically within its lane. Current Autopilot features require active driver supervision and do not make the vehicle autonomous.”

Even the product feature of Model S states the requirement for driver intervention,

“Autopilot enables your car to steer, accelerate and brake automatically within its lane under your active supervision, assisting with the most burdensome parts of driving…”[3]

Such instance raises complicated questions of liability, in absence of a proper legal framework. How to ascertain who was at fault, the driver or the product itself?

Leonardo Da Vinci is not a name that many will associate with autonomous vehicles. Although the first-ever autonomous cart, a precursor to the present automobile industry was designed by him in the 1400s [4]. Centuries later, we live in a world where autonomous vehicles are not only part of a Steven Spielberg or a Christopher Nolan reality. The U.S. Department of Defense’s research arm, DARPA has played a crucial role by sponsoring the challenges that pushed the development of autonomous cars by leaps, during 2004-2013.[5] At the moment, companies like Uber, Ford, Mercedes, Tesla, Google, General Motors, Tata, etc., are already gearing up to get fully automated cars on roads.

Autonomous cars operate on their own – or with little to no human input – based on the kind and level of automation it is processed with, as delineated in detail below. Autonomous cars rely on multiple things including motion censors, light sensors, video cameras, detection of other vehicles, GPS, software, algorithms. “Sophisticated software then processes all this sensory input, plots a path, and sends instructions to the car’s actuators, which control acceleration, braking, and steering.”[6]

Many countries have adopted the Vienna Convention on Road Traffic, 1968 which imposed as a requirement the necessity of a driver to be in control of the vehicle all the time. Such a compulsion was a hindrance for the governments to allow testing of autonomous vehicles. It was only in May of 2014 that an amendment allowing the automobile to drive itself was permitted even when it “can be overridden or switched off by the driver”.[7]  Although, the United States was not part of the convention, and various states in the USA have passed legislation allowing the testing of totally autonomous cars.[8]

The Society of Automotive Engineers has delineated automation into 6 categories. [9] It has been accepted worldwide. The cars on levels 4 and 5 are yet to be launched.

According to a WTO report, “Globally, road crashes kill 1.35 million people and injure 50 million people every year; or more than 3000 persons every day.” [10] It is contended that autonomous vehicles will help reduce the accident rates.[11] Will autonomous cars be able to reduce that or will there be an increase in the number of mishaps? While any fully autonomous car is not yet commercially available, there have already been few mishaps wherein semi-automatic cars were involved. Waymo, Uber, Tesla have been involved in several accidents resulting in injuries or death, or damage. [12]

What happens when an autonomous car is involved in accidents or a crash? What will be the legal recourse available? Who will be held liable for it? What will be the remedies available? These are few questions that are rising with the increasing number of autonomous vehicles on road and their involvement in instances like the recent Tesla crash.

Analyses of debates between approaches to the liability of autonomous cars

Before analyzing the prominent approaches to ascertain liability for autonomous cars involved in accidents, it is important to acknowledge that different levels of autonomous cars would require different frameworks of liability. Essential due to the presence or absence of human factors and the proportionality of the technology used. With fully automated cars using only technical parameters to make decisions, liability principles are proposed to be developed separately by various law and technology scholars.

There are multiple approaches been deliberated upon within the discussions of the liability of autonomous cars. First are the discussions around the existing framework of law and how it can be applied to autonomous vehicles. The traditional approaches include product liability and principles of criminal liability. Product liability would hold the manufacturer responsible for any defect in the product manufacturing or design. While instances of negligence on part of the driver to give necessary input would make the driver liable, as happened in the 2018 Uber case.[13]

Another approach involves granting separate legal personhood to autonomous cars, holding themselves accountable. Legal personhood essentially is the capacity of the entity to enter into legal relations. Being a person in law also gives certain rights, duties as well as responsibilities.[14] In the case of autonomous cars, giving them legal personality will give them a legal standing like corporations and hold them accountable.

While deliberating upon the issues of autonomous cars in the EU, the European Parliament highlighted the need to depart from the traditional liability approaches like product liability, strict liability, negligence, homicide. Rather they have proposed gradual progress towards granting legal personhood for autonomous cars.[15] Although while granting personhood, the liability of the developers and the manufacturers need to be balanced, so that they cannot evade liability for possible malfunctioning from their end.

Within the discourses between traditional liability approaches and the legal personhood approach, the essential difference is the involvement of any form of human error. The application of such a liability framework requires consideration of numerous factors, and a detailed analysis based on the jurisprudence of legal personhood within a country, stakeholders, and liability principles, need to be formed yet.

Citing reasons of job loss, for people dependent on driving for their livelihood, the current Indian government has declined not to allow any autonomous cars for the Indian roads.[16] Although fully autonomous cars are still under development, levels 2, 3, and 4 cars, requiring driver assistance are under research and development by a few Indian market players as well.[17] Alongside the big market players like TATA, there are quite a few IIT’s[18] and startups[19] developing autonomous cars compatible with the Indian roads. With research focused on Indian demographics and infrastructure, the development of such cars has already started in India.

There is an automobile and transportation revolution underway, yet the legal framework around it is not existing in most countries, including India. While science fiction literature and movies, the protagonist racing away in an autonomous car can exist without any legal ramifications, in real-life questions of liability are crucial to deliberate upon.

With the increasing research and development of autonomous cars, the framework around law and policy is vital. Although we may be approaching a future with minimal human interference, what we lack in most parts of the world is a strong regulatory framework.

Existing law for liability for automobile accidents in India

Currently, any instances of accidents wherein a motor vehicle is governed by the law of torts, ‘Indian Penal Code, 1960’ (IPC) and ‘The Motor Vehicles Act, 1988’ (MV Act).

The operation of vehicles are governed by the ‘Motor Vehicles Act, 1988’ (MV Act). It does not allow for licensing for and usage of autonomous vehicles in India. As far as liability is concerned in case of death or permanent disablement, MV Act follows the principle of ‘no fault’ liability as per Section 140[20]. The owner of the vehicle is held liable and has to pay compensation to the aggrieved party. In case of driving at a speed or in a manner which is dangerous to the public[21], the driver of the vehicle is held liable and is sentenced to six month – two years imprisonment depending on the number of times such offense is committed. [22]

At present, MV Act also does not allow for any testing of autonomous vehicles in India. Proposed amendment of the MV Act, the Motor Vehicles Amendment Bill, 2016, seeks to exempt certain vehicles from the application of the MV Act, to foster research, innovation, and development. [23]

As per the IPC, various provisions address issues of rash driving[24], causing death by negligence[25], causing hurt[26] as well as grievous hurt[27]. IPC provides for imprisonment as well as compensation for the offenses.

Specific amendments considering the issues associated with autonomous cars have still not been initiated in India. Autonomous car and issue with liability is only one of the issues that the upcoming transformation brings. There are multiple issues related to insurance, privacy, data protection, hacking, infrastructure, planning, employment, etc., that need to be dealt with and before autonomous cars get on Indian roads. In the ‘Autonomous Vehicle’s Readiness Index, 2020, India has ranked 29th, steeping even further than that of its earlier reports.[28] According to the report, many countries are gearing up for the technological transformation on roads through enacting laws and policies as well as various other factors like infrastructure, research, production, etc. With multiple market players initiating the development of autonomous cars, it is crucial for a country like India – being the 4th largest automobile market – to initiate reforms pertaining to autonomous vehicles. Thus far, India is yet to begin the journey towards creating an ecosphere within which autonomous driving technology can be developed and implemented.