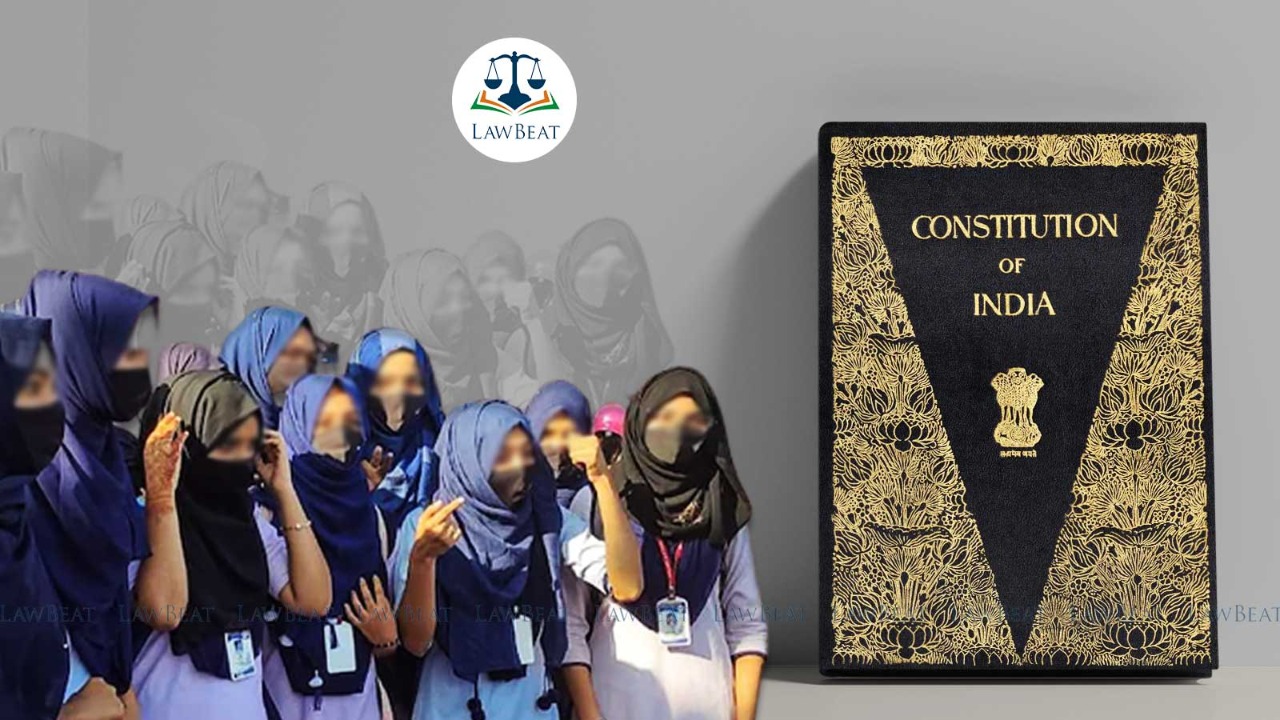 The recent controversy surrounding the wearing of hijab to educational institutions throws up a number of interesting legal questions surrounding the doctrine of Essential Religious Practice. This piece makes a case that such questions are no more res integra and accordingly delves into the same.

It is incumbent on the students to adhere to the uniform as prescribed by the educational institution. Such rules cannot be flouted. Similarly, had the hijab been a simple piece of cloth attached to the body, the same would have to be discarded in favour of the mandated uniform. However, it gains significance due to religious sentiment attached to it. Hence, the premise of this piece is to discuss the broad contours of essential religious practice test in order to claim protection under Article 25 of the Constitution of India.

Many scholars trace the history of hijab to the Islamic scriptures. Amongst many reasons, it is mainly attributed to the fact that it protects women from the lustful gaze of men. Others have different views. However, the history is not what we will be delving into. However, it is necessary to point out that several Islamic scholars are of the opinion that hijab is not a mandatory requirement under Islam.

The Hon’ble Supreme Court first discussed the concept of ‘Essential Religious Practice’ in the case of Commissioner, Hindu Religious Endowments, Madras v. Shri Lakshmidar Thirtha Swamiyar of Shri Shirur Mutt AIR 1954 SC 282. In the said case, the Supreme Court distinguished ‘secular practices’ from ‘religious practices’ and held that the latter alone is protected by article 25 of the Constitution. The ‘religious practice’ must be essential to the religion itself.

The Supreme Court further elaborated that the Essential part of a religion means the core beliefs upon which a religion is founded. Essential practice, in a religion, means those practices that are fundamental. It is on these essential practices that the superstructure of the religion is built on without which any religion will be no religion. The test to determine whether a part or practice is essential to a religion is to find out whether the nature of the religion will be changed without that practice. If the taking away of that part or practice could result in a fundamental change in the character of that religion or in its belief, then such part could be treated as an essential or integral part.

In order to understand whether the practice of wearing a Hijab satisfies the test of Essential Religious Practice, it is important to further study the judicial developments in this regard.

The case of Shayara Bano v/s Union of India and Ors. (2017) 9 SCC 1 known as the Triple Talaq case reiterated the contours if Essential Religious Practices. In this case the moot question before the Court was whether the practice of Triple Talaq amounts to an Essential Religious Practice and hence protected under article 25 of the Constitution of India.

The Hon’ble Court, while reiterating its earlier position, held that everything permitted or prohibited does not form part of Essential Religious Practice. Instead, the Hon’ble Court held that the test to determine whether a practice falls within the ‘Essential Religious Practice’ is to find out whether the nature of the religion will change without that part of practice. If the taking away of that part or practice could result in fundamental changes in the character of that religion or in its belief, then such part could be treated as an essential or integral part. Such practices cannot be changed with time and they ought not to be treated as embellishments. The Hon’ble Supreme Court referred to the Hanafi school of Islam and held that triple talaq is sinful in spite of being tolerated by it and held that the fundamental nature of Islamic practice will not in its absence.

In the case of Javed and Ors. v/s State of Haryana and Ors. (2003) 8 SCC 369, a challenge was laid to the Haryana Panchayati Raj Act disqualifying anyone with more than 2 living children from holding specified offices in the Panchayat. The Petitioner, a Muslim by faith, submitted, amongst other grounds, that his personal laws permitted him performance of marriages with up to 4 women for the purpose of procreating children and restriction thereof would violate Art 25 of the Constitution of India. The Hon’ble Supreme Court held that such a protection can be claimed only if the same forms an Essential Religious Practice. The Hon’ble Court further held that what is permitted or prohibited does not become a positive tenet of a religion and that a practice does not acquire sanction simply because it is permitted. The Hon’ble Court concluded by holding that the same can be regulated or prohibited by Legislation in the interest of public order, morality, and health.

In the case of Khursheed Ahmed Khan v/s State of UP and Ors. (2015) 8 SCC 439 the Supreme Court affirmed the principle propounded in the Javed Ali case (supra.). In the instant case, the Petitioner challenged the UP Government Servants’ Service Conduct Rules, 1956 that provided for removal of government servants for proven misconduct of contracting another marriage during the subsistence of an already existing one. The challenge to the rule by the Petitioner was that it was permissible for Muslims to enter into marriage with 4 women and as such the said service rules violated his Fundamental Rights under Article 25 of the Constitution of India. The Hon’ble Supreme Court while referring to a plethora of judgements including the Javed Case (supra.), negatived the plea and held that Art 25 was subject to public order, morality, and health and further went on to hold that polygamy was not an integral part of the religion and monogamy was a reform within the powers of the State under Art 25 of the Constitution of India. Holding so, the Hon’ble Court dismissed the Petition and upheld the service rule.

In the case of Mohammad Zubair v/s Union of India and Ors. (2017) 2 SCC 115, the Hon’ble Supreme Court negatived the submission that Islam mandated compulsory growing of beard and held that the denial of an Airman, employed in the Indian Air Force, permission to maintain beard as constitutional. The Hon’ble Supreme Court observed that the Appellant having enrolled in the Air Force is expected to maintain discipline in the Force and that regulations and policies in regard to personal appearance are not intended to discriminate against religious beliefs nor do they have the effect of doing so. The Hon’ble Court further held that their object and purpose is to ensure uniformity, cohesiveness, discipline and order which are indispensable to the Air Force, as indeed to every armed force of the Union.

Applying the ratio laid down, the latent ambiguity in its interpretation coupled with the fact of not changing or altering the fundamental nature of Islamic practice it is amply clear that wearing of Hijab is not an essential practice so integral that the fundamental character of Islam would change without it.

The next question that would arise in the eventuality that the Courts recognize right to wear Hijab as an essential religious practice is the effect of such a recognition.

The immediate effect of such recognition would ostensibly mean that a woman who chooses to practice and profess her faith in Islam would be obligated to wear it irrespective as to whether she exercises her personal autonomy or not.

That despite having been recognized as an essential religious practice, it still does not confer an absolute right on any incumbent to practice it anywhere and everywhere and the state in its discretion would be entitled to place an embargo in the larger interest of public order, health and morality. To drive home the point, it is pertinent to refer to the majority opinion of the Hon’ble Supreme Court in the case of Indian Young Lawyers Association  and Ors. v/s State of Kerala and Ors. (2019) 11 SCC 1 wherein  Justice Chandrachud, opined that,  “The test should be whether a practice subscribes to the Constitution irrespective of whether it is essential or not” and held that the rights under art 25 of the Constitution of India are subject not just to public order, morality, and health, but also to other provisions of the part. In other words, the Fundamental Rights enshrined under art 25 of the Constitution of India is subservient to Art 14 of the Constitution of India.

It is altogether a different issue as the said judgment has been subjected to a review and the said Review Petition is pending adjudication. The original judgment, having not been overruled till date, continues to be good in law.

It is also noteworthy that a case with similar facts has already been covered by the Hon’ble High Court of Kerala in the case of Fathima Thasneem and Anr. v/s State of Kerala and Ors. [W.P (C) no. 35293/2018 decided on 04.12.2018]. The Petitioner therein challenged the rule of an educational institution proscribing hijab and face coverings. The Hon’ble Court held that it is for the institution to decide whether the petitioners can be permitted to attend the classes with the headscarf and full sleeve shirt. In other words, it is purely within the domain of the institution to decide on the same. The Hon’ble Court held that it cannot even direct the institution to consider such a request.

What can be concluded from the above analysis is that only those religious practices satisfying the test of ‘Essential Religious Practice’, as held by the Hon’ble Supreme Court, can be protected under Article 25 of the Constitution of India. However, even if the said practice passes the test of Essential Religious Practice, it is subject to other Fundamental Rights in the Constitution and in a country like India known for its plurality and diversity, public display and exhibition of one’s religious identity in an educational institution imparting secular knowledge cannot be sought to be enforced as a matter of fundamental right.

[Views are personal. Advocate Akshay Ravi is practicing at the Delhi High Court]