One step forward , two steps back – Politicisation of Womb in America 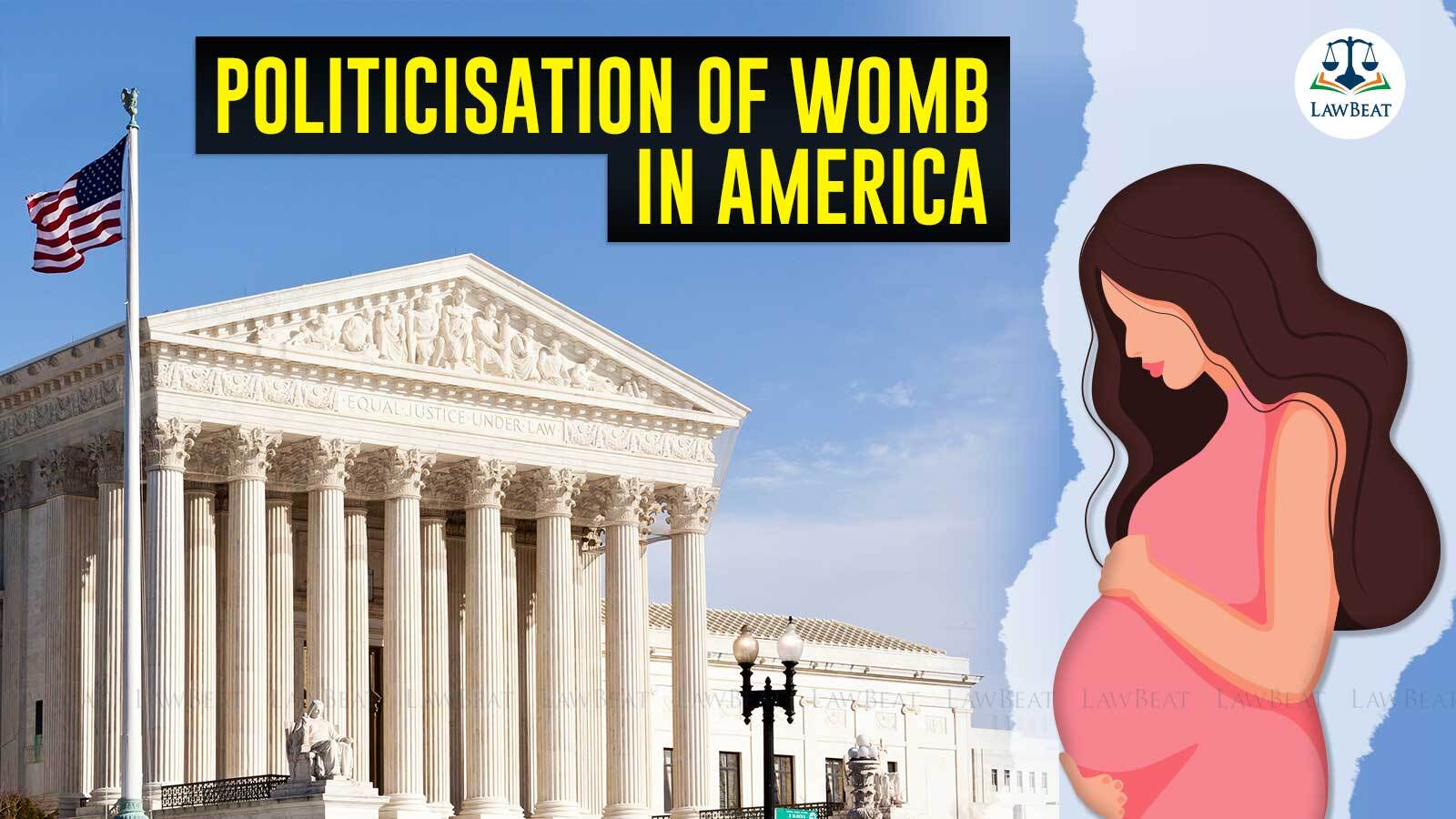 Authors' notes: This piece gives a brief history of abortion rights in US, especially in wake of the recent controversy. The analysis also includes the eugenics manipulation controversy and Indian Position in this regard

"When nature prompted, and no law deny'd Child birth and the mother cried "

The unprecedented leak of the US Supreme Court draft opinion in Dobbs v. Jackson Women’s Health Organisation to Politico couple of weeks before  seems to be a nail in the coffin for the landmark decision  given by Justice Blackmun in  Roe v Wade in the year 1973, which has remained an instrumental force ever since in asserting the American woman’s right over her womb. Abortion, a sensitive yet contentious issue for the American society has been the hotbed of judicio-political debates for over five decades. This is because some states have had different legislations which partially or totally ban abortions outlining exceptional circumstances under which they can be performed.  Roe v. Wade set at naught these legislations impinging upon the freedom of women’s choice over their bodies. The 7-2 ruling upholding the challenge against the Texas abortion statute, created a mechanism for regulating abortions based on a trimester system. Around the end of the second  (24 weeks), the point where the fetus is likely to  achieve viability or the ability to survive outside the womb, it allows regulations to be made by the States for preserving and protecting maternal health. This is the compelling point for State’s legitimate interest in protecting potential life where a meaningful life outside the mother’s womb can be envisioned. Finally, in  third trimester States are allowed to ban all abortions save for certain life-threatening situations.

Justice Blackmun’s majority opinion, found the Right to Privacy inhering in the Ninth and the Fourteenth amendment of the US Constitution broad enough to encompass a woman’s choice regarding termination of her pregnancy. Further, it discredited the recognition of an unborn  as a person having the right to life and liberty for the purpose of the Fourteenth amendment. The opinion discussed in detail the psychological harm associated with the denial of this choice as well as the repercussions that unwanted child birth could have for the women.

Justice Byron R. White’s dissent on the other hand found the majority judgement an improvident and extravagant exercise of the judicial review function; a constitutional barrier on States’ efforts to protect human life on one hand, and investiture of a constitutionally protected right in mothers and doctors for its extermination on the other.

In Planned Parenthood vs Cassey (1992), a 5-4 decision of US Supreme Court upholding a Pennsylvania decision in part affirmed Roe v. Wade’s essential component of fetal viability.  It clarified that the State regulation could not place an undue burden or a substantial obstacle in the path of a woman seeking to abort a non-viable fetus. The trimester system was replaced with the viability approach which in the court’s view was broad based and fair. Chief Justice William H. Rehnquist in his dissent opined that abortion was not a constitutional right and Roe v. Wade was wrongly decided.  Subsequently, Gonzalez v. Carhart (2007) upheld Congress’s Partial-Birth Abortion Ban Act, 2003 (that banned late term pregnancy or the intact dilation and extraction procedure) holding that it did not impose an undue burden on the due process right of women to obtain an abortion. This decision distinguished the earlier Stenberg v. Carhart (2000) case where the Court by way of a 5-4 majority had held the similar Nebraska statute to be unconstitutional. Justice Ruth Bader Ginsberg writing a separate opinion in the case had stressed that the right of life and personal liberty of the physicians exercising their independent judgement could not be usurped by the State. The marked shift in Gonzalez was meted by her fierce dissent where she of the view that by dishonouring the earlier precedents the decision attempted to shield woman by denying her any choice in the matter.  According to her the Court’s way of thinking reflected ancient notions about women’s place in the family and under the Constitution — ideas that had long since been discredited.

Now, the leaked draft which has raked the abortion debate yet again contains Justice Samuel Alito’s majority opinion in Dobbs, a case involving a challenge to the Gestational Age Act, 2018 in Mississippi which proposes a ban on abortions after 15 weeks of pregnancy. The opinion discredits both Roe and Casey as instruments enflaming debate and deepening division. It enlists five factors for overruling both the precedents :

The draft opinion thus has the effect of taking away the constitutional status of the right of abortion conferred upon it by Roe v. Wade. It further confirms the existence of legitimate interests such as protection of maternal health and safety, preservation of the integrity of the medical profession, mitigation of fetal pain necessary for the enactment of the Mississippi’s Gestational Act. Around 70 percent of the Americans seem to be against the reversal of Roe v. Wade.

Conundrum and the bumpy road ahead

Justice Alito’s opinion clearly mirrors the conservative leanings of the US Supreme Court. If Roe v. Wade were to be overturned as many as 26 states are likely to partially or totally ban abortion. Around 13 states have trigger bands that could trigger pre-Row laws into action. The Court’s intent could be gauged in September last year when it declined to block Texas’ 6-week abortion prohibition bill also known as the ‘Heartbeat Act’. These laws vary from state to state and some even lack an exception for rape or incest. For instance- The very recent Oklahoma legislation which defines woman’s life also quite narrowly. If such laws were to see the light of the day, they would cause extreme hardship  for the women for they would have to travel long distances for abortions or rely on unsafe medical procedures. A Federal Law upholding Roe and legitimising abortions also seems quite unlikely to muster the filibuster in Senate. The even split between the Republicans and Democrats would make it challenging for the Democrats to reach the vote count of 60 required to pass the law.

As a result of this impasse, the way forward for the States could be to expand their public health insurance programs to fund abortions for women coming from low-income groups. States could also set up funds for women from other states coming for abortion. The State of Oregon has been quite proactive with efforts in this regard. Chicago Mayer Lori Lightfoot has already announced the provision of an additional $500,000 for abortion care, and has claimed that Chicago would become an oasis of abortions if Roe were to be overturned.

Use, Abuse & State’s Interference : A story of Eugenic manipulation

A complete judicial proselytization of precedents galvanising constitutionally protected rights affecting women could be a canary in the coal mine for civil liberties in the US such as same-sex marriages, right to use contraceptives in marriages or maybe even the right to have sex within one’s private confines. It is pertinent to mention here Justice Clarence Thomas’s concurring opinion in Box v. Planned Parenthood (2019) in relation to the Supreme Court’s denial of a writ of certiorari against the invalidation of the provision of an Indiana statute banning selective abortions. This provision made such eugenic abortions illegal where mothers sought abortions solely on the grounds of child’s race, sex, disability, or related characteristics. Justice Thomas’s opinion seemed to lend support to State control over such so-called disturbing abortions calling them acts rife with the potential of eugenic manipulation. However, Roe and Cassey would still treat such abortions as legal for there being no potentiality of life for a non-viable fetus irrespective of its gene composition or disability. The moral underpinnings of such abortions exacerbated by racial segregation defence (a compelling interest for the States to ban such abortions) may thus support their roll back by the SCOTUS.

India seems to be more progressive when it comes to Abortion Rights of a women. After the recommendation from Shantilal Shah Committee for legalisation of abortion in India in the year 1966 , we finally gave to us the Medical Termination of Pregnancy Act, 1971.  Before that, Section 312 of the IPC ( originally drafted by Lord Macaulay ) was a punishable offence. The Act , not just identified cases of rape to be put in the category of abortion but even in a case where “pregnancy occurs as a result of failure of any device or method used by any married woman or her husband for the purpose of limiting the number of children” .Consent of woman was also prima facie given importance and no termination was allowed otherwise. Also, after the 2017 amendment to the original act , the upper gestation limit from 20 to 24 weeks for special categories of women for abortion have also been identified that includes rape survivors, incestual victims , vulnerable minors and specially-abled woman.

The modern substantive elements of due process under the fourteenth amendment interpreted by the US Supreme Court have been widely recognised by the Supreme Court of India whilst interpreting procedurally dominant due process clause under Article 21 of the Indian Constitution. They are broad based and holistic enough to encompass unenumerated rights such as Right to privacy, education, shelter and so on which have not specifically been mentioned in the Constitution. The erroneous disregard of these elements in favour of a strict and literal interpretation of an organic and ever evolving document like the Constitution (as evident in the draft opinion) may have huge ramifications. It would have the effect of relegating the position of the courts from protectors of fundamental rights to that of mere secondees of legislative opinions which may not augur well in a democratic set up with clear separation of powers.

Views of the Authors' are personal. Ms. Pragya Parijat Singh is the Assistant Professor of Legal Practices- O.P. Jindal University  & Advocate , Supreme Court of India. Mr. Aditya Gupta is an MCL scholar at the University of Cambridge.