"Rape is rape", but only for a woman? Under Scanner: Karnataka High Court’s Judgment 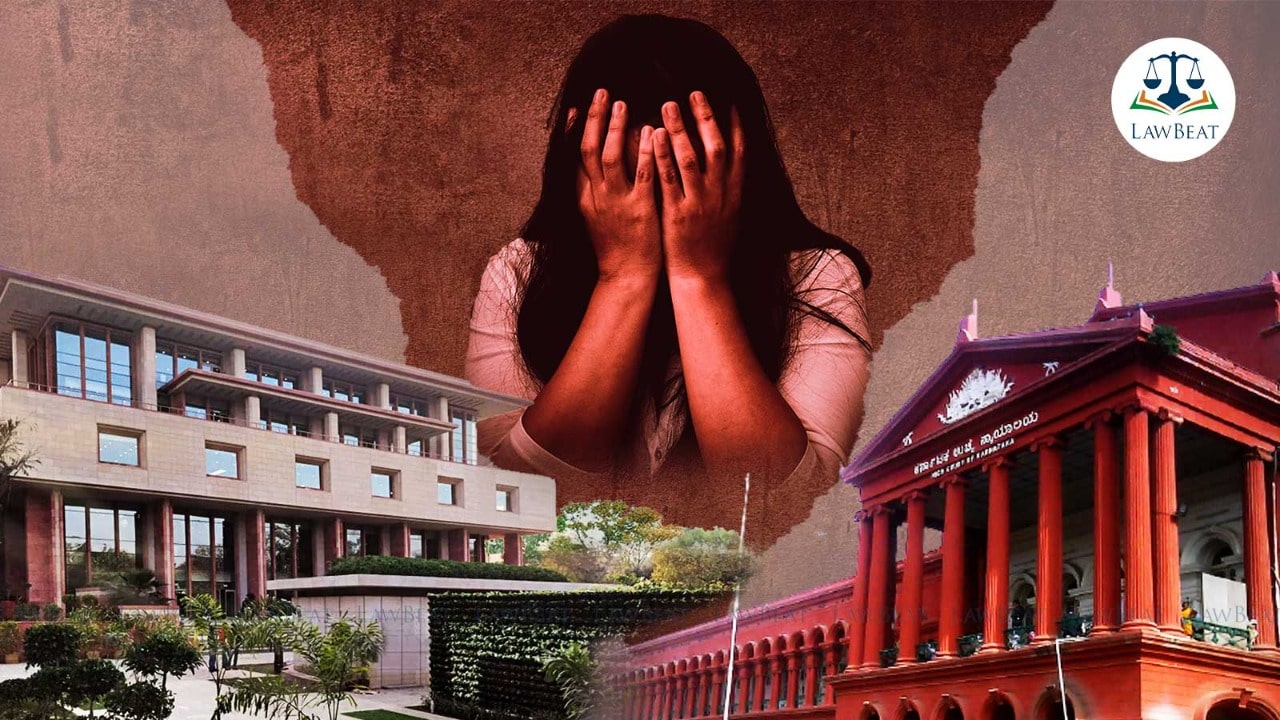 Rape has been defined under Section 375 of IPC, 1860 and it provides that a man is said to commit rape when he penetrates his penis to any extent into the vagina of a woman. How far it has gone inside the vagina is immaterial, and even the slightest penetration amounts to rape. However, in the same breath, the legal provision goes on to state that "sexual intercourse by a man with his own wife, the wife not being under fifteen years of age, is not rape."

It is a non-consensual act of violence perversion by a husband against the wife where she is physically and sexually abused.

The constitutional and moral sanction of Exception 2 to Section 375 IPC has been the subject matter of raging debates time and again, in courts and outside them. It has come under question as to whether Exception 2 of Section 375 IPC which protects a husband from a non-consensual or forceful act of sexual intercourse violates the promise of equality before the law under Article 14 of the Constitution.

Contemplations on questions of gender equality in recent times, have stoked the fire further - with the question reaching the Supreme Court, Delhi High Court and most recently, the Karnataka High Court. Further, elsewhere in the world, for instance, the UK's House of Lords (that has passed down the Indian Penal Code to the country) struck down the marital rape exception from the English law in 1991. Nepal, Canada, Australia, the European Court of Human Rights have also outlawed marital rape.  However, up until yesterday, no decisive answer was given by any Court to the question in India.

Refusing to quash proceedings wherein a Special Court framed charges against the husband, for offenses punishable under Sections 376, 498A and 506 of IPC and Section 5(m) and (l) r/w Section 6 of the POCSO Act, the Karnataka High Court held that "A woman and man being equal under the Constitution cannot be made unequal by Exception-2 to Section 375 of the IPC.

Rejecting the differentia created by the exception between a husband, and any other man, the single judge bench of Justice M Nagaprasanna reasoned that, "A man sexually assaulting or raping a woman is amenable to punishment under Section 376 of IPC. The contention of the learned senior counsel is that if the man is the husband, performing the very same acts as that of another man, he is exempted. In my considered view, such an argument cannot be countenanced."

“Integrity and bodily freedom of a woman, the wife, being ravaged by the husband, whether, could be absolved and protected by a law that mandates equality of its application”, the bench said.

The single judge bench said that, "Woman and man being equal under the Constitution cannot be made unequal by Exception-2 to Section 375 of the IPC. It is for the law makers to ponder over existence of such inequalities in law. For ages man donning the robes of a husband has used the wife as his chattel; but his crude behavior is notwithstanding that his existence is because of a woman."

On the need for change

"The age old thought and tradition that the husbands are the rulers of their wives, their body, mind and soul should be effaced. It is only on this archaic, regressive and preconceived notion, that cases of this kind are mushrooming in the nation. This is in fact in the public domain. A brutal act of sexual assault on the wife, against her consent, albeit by the husband, cannot but be termed to be a rape," the bench held.

On the other hand, in the proceedings before the Delhi High Court, a marital rape victim, Khushboo Saifi, and two organizations - RIT Foundation and All India Democratic Women's Association (AIDWA) have challenged the constitutionality of Exception 2 to Section 375 IPC. The matter is pending decision before a division bench of the Court.

After marathon hearings, the Court urged the Centre to file a response on the matter, however, the Centre maintained that as a response to the question would affect citizens' private lives, the answer can only be arrived at after a "consultative process".

"We are entering someone's bedroom (by seeking a decision on marital rape exception), "therefore the question needs to be decided after "a meaningful consultative process" only, the Centre told Court.

The bench said, "The central government has to take a decision. This is a matter where we want to hear you. It doesn't gel with us if we keep the matter pending."

Whereas, the petitioners submitted inter alia that "S. 375 has two elements - one is descriptive, the other is conditional. Consent is implicit in Exception 1," and that given the two aspects, "if a man committing the act on his wife, without her consent, is not treated as rape, this will be violent on the preceding section."

However, while judgment on the matter is reserved and pending, the Delhi High Court on various occasions has indicated a prima facie view that there is an intelligible differentia dividing the classes of men, in general, and men in conjugal relations - insofar as there is an expectation and understanding of sexual relations in a conjugal relationship.

On the questions whether there was an expectation of sex in conjugal relations, and whether that translates into a right, the petitioners have argued that, "There may be expectations, yes, if agreed upon. Unilateral too, and if it is not fulfilled one may resort to civil remedies. However, if the expectation translates into an act of violence, that should be treated as an offence. Not every man, not every act in the marriage is an offence however if the act is in express disregard of the woman's consent, that should be treated as an offence."

The basic argument on behalf of petitioners against the Exception has been that "refusal, non-consent, "No" of a partner has to be respected. We are not talking of minor offences but serious ones. Rape by its very nature is a serious offence."

Referring to the Joseph Shine judgment, it has also been argued that, "the idea that a woman, by marriage, consents in advance to sexual relations with her husband...was offensive to liberty and dignity."

However, the Delhi High Court bench questioned whether the law says "that a woman on whom sexual violence has been committed without her consent has no recourse?" and opined that, "As I see it the exception does not say so."

It also needs to be examined if any relationship involving two or more parties will require the consent of only one of them - if not, then it follows that rape can also be committed upon a man. This is where gender neutrality walks into the discussion on the subject.

Delving into this aspect of whether the petitioners would still challenge the constitutionality of the Exception if the law was gender neutral, the Delhi High Court bench too has enquired, "If the exception said if two parties are married then there was no rape, would one still say it is unconstitutional?"

However, there have been no definitive answers to the question before the Delhi High Court from the petitioners.

The implication(s) of the Karnataka judgment on the Delhi High Court case, if any

What flows, therefore, is that the Karnataka High Court judgment would merely have persuasive value in the case before the Delhi High Court.

Adv. Pawan Bhushan, practicing in the Supreme Court, said, "While I'm very glad about the observations of the Karnataka High Court, those proceedings related to quashing of charges (in specific facts) and thus, will have limited persuasive value in the Delhi High Court matter which is ongoing before a division bench. I do hope that the matter is placed on record in Delhi."

On similar lines, Adv. Jose Abraham, Advocate on Record of the Supreme Court elaborated, "Though the judgment of the Single Judge Bench of the Karnataka High Court is not binding on the Division Bench of the High Court of Delhi which dealt with a larger question as to the validity of Exception 2 to Section 375 of the Indian Penal Code, but it will certainly have a persuasive value."

Step in the right direction?

Despite the fact that the judgment will merely have persuasive value, it is a breakthrough for the country, in as much as it paves the way to recognizing that while sexual relations are a crucial aspect of marriage, marriage itself is not a non-expiring license for having and enjoying sexual relations with a partner.

Abraham lauded the Karnataka High Court's judgment to the extent that it would help normalize this definition of marriage, especially with respect to women. He opined, "This progressive judgement of the Karnataka High Court tends to undo the historical injustice meted to married women who have been treated as subordinates to their husbands with legal backing of the pre-constitutional Indian Penal Code."

Is rape as an offence exclusive to women?

The questions, however, remain - Is rape not simply sexual penetration by force or threat of force during the non-existence of consent? Is consent itself not gender neutral? Does the establishment of a sexual relationship not require consent of both the partners - man and woman, or man and man, or woman and woman?

Further, with the society now slowly moving towards socially accepting homosexuality, can it be said that rape itself can only be committed upon a woman? Similarly, with homosexual relationships also seeking the sanction of law for marriage, how futuristic is a law that recognizes rape as an offence only being committed by a man upon a woman?

Adv. Ayush Anand, a practitioner at the Supreme Court, opines, "Marriage cannot be a license to ravish a woman and ends de-facto at the very moment when such cruelty has been committed. Today in our progressive society, where women are marching hand in hand with men in all aspects, it needs to be re-examined if rape can only be committed by a man upon a woman. The society and the legislature need to answer whether consent is only required from a woman, or a man too, in the establishment of a sexual relationship, as this answer will determine the entire gamut of sexual relations in a marriage, and consequently, the definition of marital rape."

Similarly, Adv. J. Sai Deepak, representing one of the parties in the proceedings before the Delhi High Court, had also pointed out in a hearing, that in dealing with the question of marital rape, while one "may thrust on individual autonomy, others may emphasize on family as a unit, along with that." Therefore, "If individual autonomy is all there is to it, then gender neutrality with respect to sexual violence has to be looked at."

It can be said that while the Karnataka High Court judgment is surely a step in the right direction, the law - as a dynamic, futuristic tool - needs to go cater to the future as well.

Lawmakers and courts need to answer certain questions which arise as a common-sensical consequence in a discourse on rape and marital rape. If one agrees that consent is a gender neutral concept and a pre-requisite for any sexual relationship between two partners of any gender, then how can rape only be committed upon a woman? Can a man not be raped? Also can rape not be committed in a homosexual relationship or marriage? On a side-note, if the society is moving towards accepting gender neutrality (homosexuality) in relationships, is gender neutrality in the definition of rape not a natural follow-through?

[The views expressed are the author's personal views.]