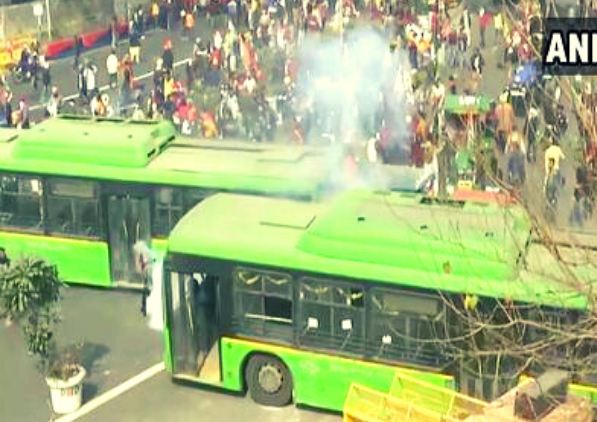 The Delhi Police on 26th January 2021 said protesting farmers violated the conditions pre-agreed for their tractor parade and resorted to violence and vandalism, leading to extensive destruction of public property.

Lets briefly go over the legal implications for causing damage to public property in terms of existing laws and precedents.

Whoever with intent to cause, or knowing that he is likely to cause, wrongful loss or damage to the public or to any person, causes the destruction of any property, or any such change in any property or in the situation thereof as destroys or diminishes its value or utility, or affects it injuriously, commits “mischief”.

Mere intention to cause destruction is sufficient.

Whoever commits mischief shall be punished with imprisonment of either description for a term which may extend to three months, or with fine, or with both.

(1) Whoever commits mischief by doing anyact in respect of any public property, other than public property of the nature referred to insub-section (2), shall be punished with imprisonment for a term which may extend to five years and with fine.

(a) any building, installation or other property used in connection with the production,

distribution or supply of water, light, power or energy;

(b) any oil installations;

(d) any mine or factory;

(e) any means of public transportation or of tele-communications, or any building, installationor other property used in connection therewith, shall be punished with rigorous imprisonment for a term which shall not be less than six months, but which may extend to five years and with fine. Provided that the court may, for reasons to be recorded in its judgment, award a sentence of imprisonment for a term of less than six months.

It is pertinent to note that while this statute enumerated penal sanctions, it has no provision for the recovery of damages.

In lieu of the aforementioned we can venture to look at the judgment of Mohammad Shujauddin Vs. State of U.P. & Ors from this judgment of the Allahabad High Court the origins of the Uttar Pradesh Recovery of Damages to Public and Private Property Ordinance, 2020 can be traced. A single Judge bench of Justice Sudhir Agarwal had stated,

"This Court can take judicial notice of the fact that these days such arsoning and rioting are going on increase day by day. Valuable public and private property of innocent people is being damaged but instead of taking any effective action against some person or persons leading the mob and recover the loss from them, the Government authorities are sitting tight as silent spectators in such matters. It is really surprising and shocking."

The Court had further noted that the UP Government must filed an affidavit stipulating as to what action the State has taken or is proposing to take in such matters where the public and private property in such type of agitations is put to loss.

In this context, the Court noted,

"Further, every such agitation is led by some political party or political leaders and recovery of the loss can be made from those who are leading the agitation or who are sponsoring these kinds of processions thus why the same is not being done. The counter affidavit shall be filed by an Officer not below the rank of Special Secretary (Home), U.P."

Court stated that in order prevent such activities and to punish guilty persons, Parliament intervened by enacting 1984 Act with an intention to provide deterrent punishment to the guilty persons. "However, this Act appears to have remained more on statute book than in practice. Very regularly, we come across activities of damage to public property in the hands of unruly mob, processionists, agitationists etc..

"They depict their action as if it is something very heroic or laudable without having even a dint of fear or apprehension that this may cause serious action against them. Complete apathy on the part of law enforcement machinery fortify their confidence since actual action is normally missing in all these matters. Police merely complete paper work by registering a report sometimes, and that too against unnamed/unknown persons, even if the processionists or agitationists are sponsored or led by well known political parties and/or political persons."

Following this, the Apex Court intervened by suo moto taking notice in public interest and passed an order on 5rd June, 2007 reported in 2007(4) SCC 474 (Destruction of Public & Private Properties, In Re) stipulating guidelines.

The reports of the aforesaid committees were considered by the Court. The matter was finally disposed of vide judgment dated 16th April, 2009 [reported in (2009) 5 SCC 212].

Most of the recommendations and suggestions made by these committees were made part of the judgment of the Apex Court.

Court said that the guidelines laid down therein shall be observed and the same would ceased to be operative as and when appropriate legislation consistent with the guidelines indicated above are put in place and/or any fast track mechanism is created by the statute(s).

"Public property is nothing but investment of people's money, i.e. money spent by Government from the funds it has collected in the form of taxes out of hard earned money of the citizens and people of India. Such funds cannot be allowed to be vested without corresponding liability of the person(s) responsible for such damage. May be insufficient, but a legislation exists in the form of 1984 Act. Further, directions are in operation in the form of the Apex Court's judgment yet nobody in the Government has bothered to follow the same and take appropriate action accordingly by taking real meaningful steps."

The Court thus put forth the following:

(i) As and when any incident of damage to public property takes place, if such agitation/procession etc. has been called at the invitation or instance of a political party or a sitting or former people's representative, report shall be registered by concerned police station against such political party/person by name. Similar would be the action if such loss is caused by any other identifiable person or group.

(ii) The damage suffered to public property shall be assessed, the concerned department, local body, public corporation etc., i.e., the owner of the property shall file a claim for realization of such amount from the political parties/persons, as directed above, before the Competent Authority, as nominated by the Government in this regard, within next seven days.

(iv) After giving an opportunity of hearing to the concerned persons, Competent Authority shall pass appropriate order within next 30 days. In case it is found that persons, against whom such claim is filed, were responsible for the said loss, the amount assessed and awarded by such Competent Authority shall be realized, if not paid on its own by the person responsible within such time as directed by such authority, as arrears of land revenue. A certificate to this effect shall be issued and sent by the competent authority to the concerned District Magistrate.

(v) For the above purpose, i.e. item (ii)and (iii), the State Government shall nominate an Officer not below the rank of an Additional District Magistrate in every District.

(vi) If the authorities responsible for taking steps, as directed above, failed to observe their duties within the specified time, it shall be treated to be a misconduct justifying disciplinary action.

(vii) Failure to take preventive and deterrent action shall be treated failure of discharge of duties on the part of Station In-charge of the area concerned at the first instance, and, simultaneously the Circle Officer as well as Superintendent of Police/DIG of the District shall also be responsible for lack of supervisory duties. It shall amount to misconduct under the Rules justifying disciplinary action in this regard.

(viii) If agitations and the loss of public property is recorded on camera by print or electronic media, they shall assist Police by providing one copy of the byte /negative of the film/ photographs etc., as the case may be, or in whatever form it is, so that it may be utilized as evidence in criminal case registered and to be investigated by police.

(ix) The police shall register cases as far as possible mentioning names of the persons, if agitations, processions etc.; resulting in loss to public property are participated by the people's representative or political persons whose identity is well known.

(x) The Police shall ensure to invoke provisions of 1984 Act without fail, wherever applicable.

(xi) Regarding punishment etc., the Apex Court has taken the view that maximum punishment shall be imposed. For a lenient view, reasons shall be assigned. The Apex Court's decision laying down various guidelines shall be processed. The relevant guidelines relating to Executive and Judiciary shall be communicated to the concerned authorities as well as the Courts by the Government as well as High Court, as the case may be.

(xii) The Government shall also ensure that criminal cases, in which senior officers of the Government, holding Class I posts or above i.e. the members of State Services or All India Services are involved, they shall be prosecuted without avoidable delay. The sanctions, if any required, shall be decided within one month from the date of receipt of the letter from the concerned authority.

(xiii) The trial shall be given top priority. In this regard, all possible steps shall be taken by requesting the concerned Courts to expedite trial in such matters.

(xiv) Similar steps shall also be taken for expeditious disposal of criminal trials against political persons in particular involving elected people's representative(s) since it is in the interest of public at large that the question of blot, if any, on their conduct and character be adjudicated at the earliest. If they are clean, their record should become straight at the earliest; and, if they are really culprit, they should be punished at the earliest so that they may not be able to further misuse their position on account of mere pendency of trials.

(xv) Investigation, inquiry in criminal matters whether pending with Civil Police or C.B.C.I.D. or with any other agency of the Government, shall be concluded in a time bound manner; and for this purpose, a proper scheme shall be submitted by the Government.

(xvi) The State Government shall constitute a high powered monitoring committee consisting of Principal Secretary (Law)/ Legal Remembrancer, Government of U.P, Lucknow as Chairman and two members, i.e. Director General of Police, U.P., Lucknow and one Officer from Home Department Government of U.P., Lucknow, not below the rank of Special Secretary as Members. The District Magistrate and S.P./ S.S.P./D.I.G. of the concerned district shall submit a monthly report to the high powered committee by 10th of the succeeding month.

(xvii) The aforesaid high powered monitoring committee shall review the reports received from various districts every month and take appropriate steps if it finds anything wanting and in case it finds any lapses on the part of some Officer(s)/authorities it shall recommend appropriate action against the officer(s)/authorities who shall proceed accordingly without fail.

It was bought about to deal with all acts of violence at public places and to provide for recovery of damage to public or private property during hartal, bundh, riot, public commission, protests or thereof.

It states that the District Magistrate or Commissioner of Police or Head of office on receipt of complaint via FIR shall within three months on the date of causing of the damage to the public property take steps to file a claim before the Claims Tribunal.