The Bar as community 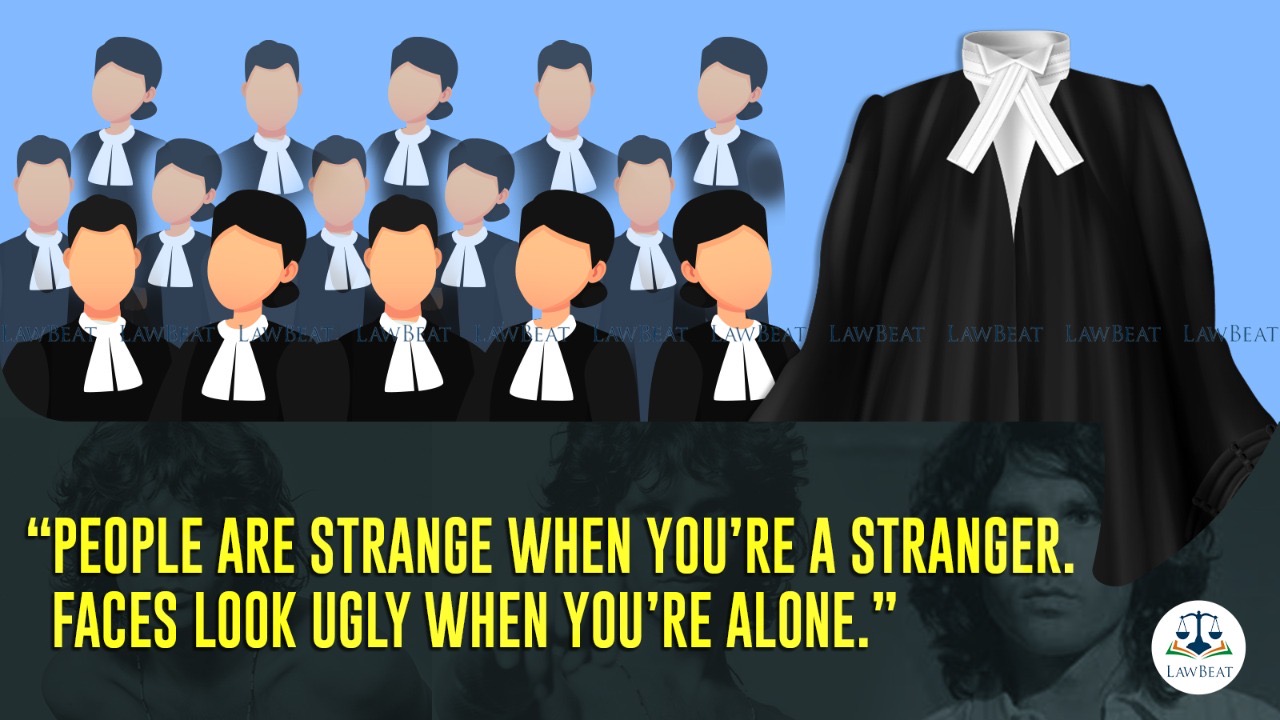 “People are strange
When you’re a stranger.

I walked into law school "a stranger in a strange land". My father is a mechanical engineer, and my mother, a craftswoman. My eldest sibling is a telecommunications engineer and the elder one a software tester. To my knowledge, I was the only one from my class in school to study law. I didn’t have the slightest idea what that entailed. I emerged from law school, five years hence, a very changed person. But this piece isn’t about my law school experience or how it changed me. I mention law school only to mark this: a message that was constantly fed to me during my time studying the law, was that it is nigh impossible to “make it” as an advocate in India, especially as a litigator, unless one has “connections”. So quite naturally, the first thing I did when I graduated law school, was rush and sign up to be a litigator, my mortal fear of public speaking be damned (because that is precisely the sort of thing that daft people do).

Many years on, after having shifted houses and cities way too many times for it to be healthy, I’m nowhere close to having “made it” (whatever that means)! And yet, I have something to say that might offer some hope for those who worry that they too might be strangers in the strange land of litigation. If this were an Aesop’s fable, its moral would be this: each one of us has the power to make our own communities and choose our friends at the Bar. Choosing whom you hang with, might be one of the most important decisions you make as a young litigator. It certainly was for me. Happily, the Bar offers you many choices and chances in doing this. I have put together something that looks like a survival guide just in case it helps anyone out there who see only ugly faces all around. But first, some preliminaries.

I mean ‘community’ not ‘Community’

Community at the Bar can take different forms. There are Bar Associations and Bar Councils that are supposed to act as fora to address advocates’ concerns. They are Community with the organizational heft that demands a capital ‘C’, but they are not what I am talking about here. I refer instead to the humbler, but infinitely more important, community. These are the people who are your first port of call for advice, support, and solidarity in difficult times. They are also the people whom you call when you’ve had a good day in court and tell them how awesome you were (because no one really cares how awesome you are, but these are the nice people who won’t tell you that). And they do all this, not because they want your vote in an election or because you’ll owe them a favour, but simply because they are good people who are your friends. Believe it or not, there are many lawyers out there, who are genuinely good people. You may wish to find them and befriend them.

Why do we need community?

There are several good reasons for an advocate to seek community.  The self-made advocate is a myth. If a successful advocate happens to tell you that they are self-made, endure what is almost certainly going to be long monologue, and remember to never cross their path again. You will save much time and thank me for it. I would have saved you from a bore.

Litigation can often place an unhealthy premium on traits such as intellect, glibness, belligerence, and can sometimes seem to even reward palpable dishonesty. It can bring out the worst in us if we are not careful. However, if you have the right sort of people around you, they will teach you that those aren’t very important things after all. They will help you see that it is far more important to be reliable, trustworthy, honest, hardworking, courageous, and resilient. Some may point you to an old Tamil song that translates thus: “Not all those who are intelligent have been victorious; Not all those who have known victory are intelligent.” And when you fail gloriously at all these things, they will offer you a leg up and get you back on your feet again for attempt number two (and three and many more).

Since our work as litigators involves presentation in open court, our successes and failures are often public spectacles. This is a great recipe for a swollen head or a crushed self-esteem, depending on one’s circumstances. If we are lucky, our community will mitigate both extremes. The right sort of friend will grab a drink with you to celebrate your success in court but tell you about the various ways in which you could have done better. They will also be there for you, to hold you up during your worst moments of crisis. If I continue to be a litigator today, it is because other advocates have held my hand to shepherd me through periods of utter despair that I could see no end to.

There are very few advocates out there who are excellent at all the wide variety of skills that good advocacy requires. Chances are that you, like me, have areas where you feel under-skilled and less confident than many of your peers. Your friends will help you navigate these weaknesses and show you that people believe in you even when you may not be able to work up faith in your own abilities.

Communities also shape how we view the world and ourselves. They were the original filter, much before social media introduced us to a hollowed-out conception of that term. As the Stoics tell us, we may find ourselves in adverse circumstances that are out of our control, but we can shape how we perceive them and how we react to them. But how we perceive events is so intricately linked to whom we trust, how they help us understand our world and what they choose to speak about. So, if you associate too much with people who are fueled by hate, that hatred is likely to rub off on you. If you spend a lot of time with people who choose to believe fake news, you are likely to consume fake news yourself. At a large enough scale, that results in a politics of hatred. But as with most things insidious, it starts with the small things.

I will mention here one last reason why we need community, though there are many other good ones. Your community is likely to be best advertisement for your ability as an advocate. In my experience, there has been nothing more powerful in getting me clients, than endorsements made by my colleagues at the Bar.

So, where are these wonderful people, and how do we get to know them? To invoke Dickens, it is the best of times, and it is the worst of times, if one is looking to build community.

It is the worst of times because we have a surfeit of counterfeits masquerading as the real thing. We must be clear what community is not. It is not a clique. It is not a “network”. It is not a club. And in these days of social media, it is not a “following”.  Too many people waste too much time trying to chase these counterfeits. To them, I quote the comedian Groucho Marx (not the other comedian, Karl), who famously said: “I refuse to join any club that would have me as a member.” My thumb rule to identify these counterfeits is to ask myself: (a) does this relationship feel transactional; (b) does it seem designed to exclude? If my answer is in the affirmative for either or both questions, I try to waste no more time pursuing it. This leaves me with enough time and energy to pursue real community.

It is the best of times to build community because we have a large cache of extremely talented, bright advocates, young and old, who are around us and who also happen to be very good people. To be clear, their goodness resides neither in their talent nor their intelligence: it is an independent trait, and it is their crowning one. In addition, we have a bevy of collaboration tools at our disposal which no previous generation of lawyers have had. This makes making new friends and staying touch much easier. My closest friend practices commercial law at London, but he is just a phone call away. His world is very different from mine, and that is precisely the point.

How did I discover my community? Well, it didn’t happen overnight. A couple of years after I moved to Delhi (after two years working in London and three working in Chennai), I set up my independent practice at the Supreme Court. Just when I felt I was getting on top of things, I suddenly found myself plunged into a personal crisis that seemed to come out of nowhere. It was a crisis that made it difficult for me to concentrate at work. I was faced with a stark choice. I could admit defeat, leave the city, and try my luck elsewhere. Or I could stay and fight, with the initial support of some kind folks who saw me through many difficult days. I chose to stay. As JK Rowling put it, “rock bottom became the solid foundation on which I rebuilt.” Through this period, I made a few close friends at the Bar (who are folks quite unlike me in almost every possible way). These friends, and few other friends from before, rallied around me and helped me stay focused on the important things, and to believe in myself. They taught me not to take myself too seriously, a lesson which I struggle to learn to this day. This is the thing about good community. It feels like home and is fun. At no stage did these people make me feel as though I owed them anything. They would be offended if I suggested the thought to them.

So, yes, community is great in a crisis, and a crisis could force you to look for one. But you needn’t wait for a crisis to start building community. You could start right now. Here’s what you could do:

To restate my point: it is well within your power to make a few of the right sort of connections along the way of learning to become an advocate. If you succeed in doing this, and it isn’t rocket science, it will matter little in the long run that you started off with none. As the Beatles put it, I get by with a little help from my friends. I hope you will too. You will be a better advocate for it.