Can the Hijab be unveiled?: A lawyer’s take on the Hijab controversy pending adjudication in courts 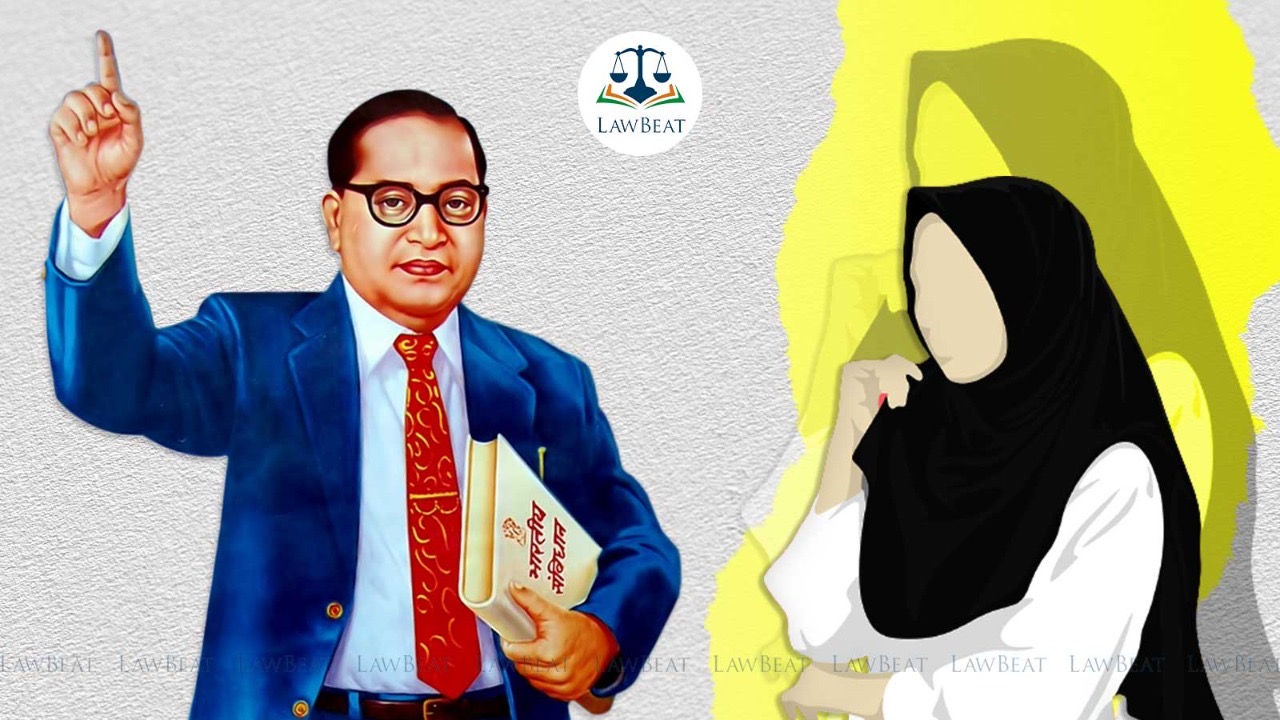 The Chairman of the Constitution Drafting Committee, and also regarded as the Father of the Indian Constitution, Dr. B.R. Ambedkar, was very critical of the Islamic veil. This is what Dr. Ambedkar had written in a chapter of the book titled ‘Social Stagnation’, and is quoted here : “Indeed, the Muslims have all the social evils of the Hindus and something more. That something more is the compulsory system of purdah for Muslim women. These burka women walking in the streets is one of the most hideous sights one can witness in India.” He further writes that, “They lag behind their sisters from other communities, cannot take part in any outdoor activity and are weighed down by a slavish mentality and an inferiority complex. They have no desire for knowledge, because they are taught not to be interested in anything outside the four walls of the house. Purdah women in particular become helpless, timid, and unfit for any fight in life. Considering the large number of purdah women among Muslims in India, one can easily understand the vastness and seriousness of the problem of purdah.”

It is a problem then to understand the relevance of the debate today, when the hijab is, as the proponents for right to wear hijab advocate, is a tool for emancipation of the Muslim woman.  More so, when this purported ‘fundamental’ religious right of self-expression and identity is now put to test on the anvil of the Constitution of India, and the arena where it is being played out is at the sanctuaries of judicial wisdom.

The hijab is an integral part of the Islamic way for womankind and has been laid down for in the “Surahs” of the Quran as well as ‘hadiths’. In Chapter 24 known as “The Light” in verse 31 in Holy Quran, the Command is as follows:

“And tell the believing women to lower their gaze and be modest, and to display of their adornment only that which is apparent, and to draw their veils over their bosoms, and not to reveal their adornment save to their own husbands or fathers or husbands' fathers, or their sons or their husbands' sons, or their brothers or their brothers' sons or sisters' sons, or their women, or their slaves, or male attendants who lack vigour, or children who know naught of women's nakedness. And let them not stamp their feet so as to reveal what they hide of their adornment. And turn unto Allah together, O believers, so that ye may succeed.”

In the original text in Arabic, the veil is referred to as a ‘Khumur’. In ‘the Islamic digest of Aqeedah and Fiqh’ by Mahmoud Rida Murad, ‘Khumur’ is mentioned as follows:

“Khumur, or head cover, is the cloth which covers all of the hair on the head, while the work, ‘juyoob’ (pl. of jaib) means not only the bosom, as commonly thought, but it includes the neck too.”

In one of the Hadidhs (words of Prophet Mohammed), explaining the Quranic verses to his sister-in-law ‘Asma’, is as follows:

“O Asma ! It is not correct for a woman to show her parts other than her hands and face to strangers after she begins to have menstruation.” [Reported by Abudawud ref: hadith no 4092 kitab al libas (book of clothing Sunan Abu Dawud)

So yes, as illustrated from above, it is an Islamic practice and it is ordained by the Qu’ran and various Islamic texts, as imperative on womankind who are Believers. That the hijab is the line between the sexes and is to be honored at all costs, in public and private life.

But then we are in the 21st Century, and if we are to take any cues from the Christian Calendar, the hijab has been in practice amongst Followers of Islam for more than a millennium and a half. And when the most libertarian of nations, such as France have failed to recognize expression of religious diversity in public schools, it does pose a towering challenge when the Qu’ran is weighed with the Constitution of India, and the idea of an India, much less the idea of an ‘Indian Nation’, which is less than a century. So not only is the exercise an attempt to ‘harmonize’ and arrive at ‘gospel’ truth a challenge in itself but, it is a daunting task commensurate with the lives of real people in a fledgling nation-state.

The present series of public grievance can be traced to a pre-university college in the Udupi district, Karnataka when some Muslim women were not allowed to enter with their hijab on. On 05.02.2022, a GOVERNMENT ORDER NO: EP 14 SHH 2022 BENGALURU, was passed under the provisions of Section 133 sub-clause (2) of the Karnataka Education Act 1983 where it was ordered that in the Colleges which comes under Pre-University Education Department, the Uniform prescribed by the College's College Development Committee or the Governing body of the College should be worn. In case, if the college administration does not prescribe any uniform, the dress should be worn in a manner protecting the equality and unity which do not disturb the public order. This order was taken as a pretext for not letting Muslim women students enter the college premises wearing a hijab. Therefore, the said Government Order is now under challenge before the Hon’ble High Court of Karnataka by way of a series of Writ Petitions filed by students and public-spirited individuals, as being, inter alia, in violation of the fundamental rights enshrined in the Constitution of India.

The first argument against the Government order is that The Karnataka Education Act, 1983 (hereinafter referred to as the “Act of 1983”) and the rules made thereunder do not prescribe a uniform. In fact, Rule 11 of the Karnataka Educational Institutions (Classification, Regulation and Prescription of Curricula, etc.) Rules, 1995 which make a provision for uniform does not make it mandatory for an institution to prescribe a uniform. The same is left to the discretion of the school/ institution. In this case, no uniforms were prescribed by the respective institutions.

That apart from the aforesaid, the fundamental rights under Article 14, 15, 19, 21 and 25 of the Constitution of India of the individuals concerned have been violated. To elaborate this, as per Article 14, any law being discriminatory in nature has to have the existence of an intelligible differentia and the same must bear a rational nexus with the object sought to be achieved. The object as has been claimed, is to maintain public order in the institutions. However, the authorities have failed to provide any nexus on how the public order will be disturbed if Muslim women enter an institution’s premises while wearing HIJAB. Article 15(1) of the Constitution of India, 1950 embodies a guarantee against discrimination by prohibiting discrimination on several grounds including religion. Moreover, the Hon’ble Supreme Court in National Legal Services Authority v. Union of India, (2014) 5 SCC 438 has recognized that clothing and appearance fall within the ambit of the right of expression guaranteed under Article 19 (1) (a) of the Constitution. That the freedom of conscience and the right to practice, profess and propagate religion are explicitly recognized under Article 25 of the Constitution. The Hon’ble Supreme Court has also recognized the freedom of conscience to be a part of the right to privacy. In the celebrated judgment,  M. Ismail Faruqui (Dr.) v. Union of India, 1994 (6) SCC 360, the Constitutional Bench grants protection to essential Religious practices under Article 25. It is therefore, submitted that assuming that the Essential Religious Practices Test applies, the wearing of Hijab is essential to the Islamic faith. However, the hijab, for that matter is yet to face it’s litmus test: the Essential Religious Practices Test as laid down by the aforesaid judgment.

“In the above circumstances, we request the State Government and all other stakeholders to reopen the educational institutions and allow the students to return to the classes at the earliest.  Pending consideration of all these petitions, we restrain all the students regardless of their religion or faith from wearing saffron shawls (Bhagwa), scarfs, hijab, religious flags or the like within the classroom, until further orders.”

I would like to take the liberty to draw a parable to a similar incident that happened in America during the civil rights movement when Ruby Bridges became the first African American admitted into an all-white school. Bridges was born on 8 September 1954, when the US Supreme court ended racial separation in schools. She was born into a poor African American family who had decided to settle down in New Orleans for a better life.

After a few years, the city of New Orleans conducted a test for all the African American children whose result would ensure a seat in an all-white school if they passed. Ruby Bridges was among the six students who cleared the test. Her parents debated sending their child to an all-white school, considering her safety as white families and students didn't really welcome blacks. But her mother convinced her father that this opportunity was important to let her gain a life of education.

On Ruby's first day at William Frantz Elementary School on 14 November 1960, she was escorted by federal marshals, as all sorts of retaliation from the white parents were expected. She endured all the insults and slurs by the crowds that surrounded the school, opposing the first black child's admission in an all-white school. The chaos ensured Ruby's first day was spent in the principal's office. No teachers were willing to teach young Ruby except for a Barbara Henry, who, against all odds, decided to educate Ruby all by herself for an entire year, with Ruby being her only student in an otherwise empty classroom. Ruby eventually went on to graduate from high school and took up a career as a travel agent. Her bravery to attend the school as the first black student in an all-white school, despite the opposition, made her a hero among all black students.

So while our Indian Courts have shunned religious diversity in the classroom, US Courts, upheld racial recognition, albeit another human individuality, to be acknowledged in schools, and to ask the powers that be, to guarantee it. To quote, Ruby Bridges, “We have tolerance, respect, and equality in our written laws but not in the hearts of some of our people.”

That so far, the Government Order has been in utter violation of the religious rights of the Minorities. But the Hon’ble High Court by way of passing the aforesaid interim order, has placed Muslim women students between a rock and a hard place. The Court has failed to understand that the very veil which is integral to the Muslim woman, and assures her a place in public life, cannot be suspended, for the reason that it is an intrinsic and inseparable part of her ‘awrah’, believed to be the source of the word, ‘Aurat’, the Arabic meaning of which is something signifying along the lines of ‘hidden’ or ‘covered’.

In conclusion, let me quote here again, Dr. B.R. Ambedkar, “I measure the progress of a community by the degree of progress which women have achieved.”
Interestingly in the present case, the argument is that the Burqa/hijab/veil is what comforts the Muslim woman to venture out of their homes, in reverence to their Divine, and to the social acceptance of the Muslimeen, all the while, accomplishing their individual needs and individuality.
The hijab is after all for His acceptance and for fear of His Wrath. Jai Bhim ?

[Views expressed by the Author are personal. Advocate Adeel Ahmed is a practicing lawyer]