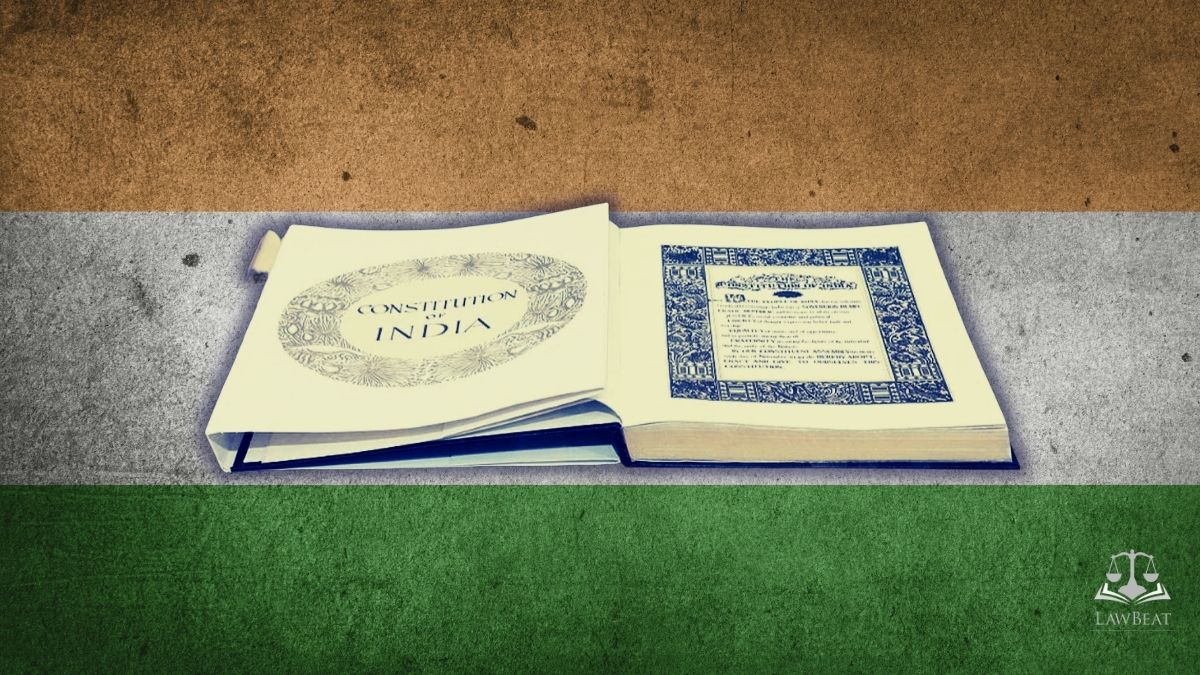 Post general elections of 2019, India has been consistently witnessing a series of fervent protests against the Central Government on various fronts. Be it the Anti-CAA protests or the ongoing agitation against the farm laws, a repetitive narrative that one hears among them is the ethical anchoring of these demonstrations as a duty in order to protect the Indian Constitution. Given that the Bhartiya Janata Party’s politics is read as a form of cultural nationalism, those opposing its policies and politics see the constitution as a site which offers a viable alternative for the construction of a different language of nationalism and patriotism. It may also be pertinent to add that this construction is deeply connected to the universal project of shaping the “idea of India”. It is in this context that one may situate the potential of emergence of ‘constitutional patriotism’ as a theoretical alternative to cultural and/or liberal nationalism.

Although ‘constitutional patriotism’ is yet to gain currency as a catch-phrase in common parlance, it has featured in at least a few works of legal luminaries, and it won’t be long before it takes off as an exotic terminology being sprinkled in academic discourses to spice up the critique of incumbent government’s actions. To be sure, one must not think that its use is restricted only to that of a useful aphorism deployed for the supposed safeguarding of Indian democracy. Rather, it embodies an entire worldview of restructuring the society and state in a certain manner, with the constitution itself being placed at the center. Hence, it is very essential to engage with it through a critical lens and also assess its practical workability as a vision of the civil society’s reorganization vis-à-vis the conventional understanding of nationalism. This article doesn’t analyze the theory of constitutional patriotism as such, but rather concerns itself with questions related to it being an optimal substitute for patriotic sentiments motivated by ethnic, cultural, historical or civilizational factors, in a nation-state.

Before addressing the subject at hand, it would do us good to briefly survey the idea of constitutional patriotism. It finds its intellectual roots in the lectures delivered by the philosopher Karl Jaspers, later published as a series titled ‘The Question of German Guilt’. In the aftermath of Holocaust perpetrated by the Nazi regime, Jaspers was grappling with the shattered pieces of German national identity. He attempted to propose a way to deal with the national shame attached with being German, and argued that collective responsibility for the collective guilt of Germany’s Nazi past would have to form the bedrock of a post-Holocaust German identity, and would in fact serve as a medium of a new, democratic ‘social cohesion’. The phrase ‘constitutional patriotism’ was later coined by Jaspers’s student Dolf Sternberger in 1979 on the eve of West Germany’s 30th anniversary as a Federal Republic. It was propounded by him as the nurturing of patriotic sentiments directed primarily towards the democratic, constitutional state. Later, this theme was substantively theorized by Jürgen Habermas during the historians’ debates in late 1980s on Germany’s attitude towards its Nazi past. Habermas portrayed it mainly as a means to purge nationalism from the public sphere, and to replace nationalist sentiments with a critical, yet deferential attitude, towards a constantly-evolving constitution. Political theorist Jan-Warner Müller describes constitutional patriotism as a “response to the challenge of conceiving, justifying, and maintaining democratic political rule – with the proviso that a successful justification will, in turn, make for the just and stable exercise of political rule”. It is a conceptualization of the dispositions and beliefs that the citizens ought to harbor for the maintenance of a given form of political rule. Müller also hints at its ultimate purpose thus:

“Put differently, a theory of constitutional patriotism provides one possible language for an exercise in collective ethical self-clarification. Who and how do we want to be, as far as political rule over ourselves is concerned? Do we see such rule centered on some kind of cultural essence that should be preserved over time? Or do we conceive of it as a project that sustains and, in turn, is enriched by a series of political conversations about the principles of justice that should govern political rule?”

The answer, in the ultimate analysis, leans towards the latter.

Now that the core of the concept has been explained in a nutshell, let us turn to a treatment of the issue placed here – Could constitutional patriotism possibly organically replace nationalist sentiments as the basis of the modern nation-state? Would it inevitably lead to a forcible marginalization of nationalist sentiments from the public discourse and fundamentally transform the state into a wholly constitutional one?

First, constitutions have historically emerged as public documents essentially meant for the purposes of sound governance. They are meant to dictate the administrative models of the modern state and to define the relation between the state and its subjects. They’re not envisioned or approved by the populace as a fiat over the regulation of entire public sphere, nor are they expected to chalk out wholesale models of an ideal constitutional way of life. While constitutions do often feature in political rhetoric, they can, by no means, be seen as the dominant decision-makers of which way the politics of a country is supposed to swing. If that would have been the case, it would trump the very idea of having a democracy (the reasons will be clearer later in the article). In short, the idea of a constitutional democracy has to have severe limitations for a democracy to survive.

Second, constitutional patriotism as an alternative to nationalism and patriotic sentiments towards one’s state, its geography and its culture is again unsustainable. The reasons are two-fold. Firstly, veneration of the constitution with a religious fervor and the politics surrounding it would lead to ossification of the document itself, and would not leave much space for dissenting voices. It would catapult the constitutional discourse to a hegemonic position. Secondly, constitutions can’t be expected to generate the level of social solidarity, unity, emotional and cultural attachment towards the nation-state which nationalism has generated over centuries. An imposition of constitutional patriotism over the members of a nation-state would be an inorganic process, and would also leave them rootless with little bonding towards the state and society. We must not forget that the theory of constitutional patriotism was evolved in order to push nationalism to a secondary position, largely as an undesirable element. While such an attitude might have been relevant for a country like Germany with a Nazi past, it is very disputable whether such a model of societal formation is relevant for India. Constitutional patriotism is a radically different twisting of the definitions of nationalism and patriotism. Besides, it may also be seen as an extension of secularism, whatever than precisely means; a last-ditch attempt by secular politics to push cultural and civilizational politics out of the public sphere and to safeguard its interests on its home-turf, i.e., the Indian Constitution.

Third, many scholars have pointed out the colonial continuities in the Indian Constitution as a borrowed document. The alien nature of the document is too glaring to ignore. In such a scenario, is it even possible to realize such a thing as constitutional patriotism, which in itself is a vague, underdeveloped idea? One should think practically the inherent issues with its propagation in a society where it can hardly be claimed that a large part of our citizenry is aware of the contents of the Indian Constitution. I fear there might be a considerable portion which might not even know about the existence of such a constitution. Do the proponents of the constitution and its overwhelming supremacy have enough confidence to conduct a sweeping survey and see whether the common people actually know their constitution, and swear by it? And if they consider their idea to be a part of Ambedkar’s larger idea of having a movement for top-down trickling of constitutional ethos, they should be aware that he himself wasn’t a stickler to the book. One has to consider the argument that this might be an attempt to chain the people to the hegemonic narratives about the constitution, to make sure that none of the notions/ideals already enshrined in it are democratically challenged. It then may be a concerted attempt at shunning the constitutional desires and aspirations of the masses, while also not making room for constitutional change. Further, all the public discourses are put to constitutional scrutiny to such an extent that all of them conform to their idea of the constitution.

Fourth, the original, limited role of the constitution as a rule-book to govern public affairs has long been discarded. It has been treated as a tool for vehemently forwarding social revolution. However, in the past few decades, this social revolution has been given a top-down model of implementation, rather than starting organically from grassroots below. Higher judiciary has played the most instrumental role in bringing about this “revolution”. Here, it is pertinent to note that higher judiciary has the final say over what the constitution means and ought to mean. This gives them unchallenged, unbridled power over shaping the course which the constitution is supposed to take. As constitutional doyen Upendra Baxi has rightly pointed out, “Like it or leave it, the fact remains that the Constitution is what the justices say it is.” The sooner we realize this and properly consider its consequences, the better. It might not be too far-fetched to argue that this judicial supremacy over the constitutional text and its interpretation can lead to the establishment of a juristocracy. It is for academicians to assess whether such a situation has already arisen in the Indian context. Even if it hasn’t, it’s too difficult to deny that constitutional patriotism will ultimately benefit the unelected judiciary and lobbies around it. It’s surprising that despite these factoids and possibilities, this brand of patriotism hasn’t been labelled as having authoritarian or toxic tendencies in any sense yet. Patriotic reverence for the constitution only adds to the uncritical, venerated attitude towards higher judiciary. This brand of patriotism, with the higher judiciary as guardians and shapers of the constitution and its ethos, is inherently undemocratic and has a genuine potential to subvert the will of the people.

Constitutional patriotism and constitutional nationalism are catchy phrases which can be easily thrown around quite frequently in public domains. That in itself isn’t a proof of their legitimate usage. We should ask ourselves: Are we, as a society, People of the Book, or do we want to turn into one, having adherence to the constitution above everything? Societies can’t be run simply on the basis of an unquestioning faith in a book, and those which are run on the writs of a book, the disastrous consequences are out there for all of us to witness. Constitution deserves respect, requires to be upheld, but it can’t demand our unquestioned reverence.