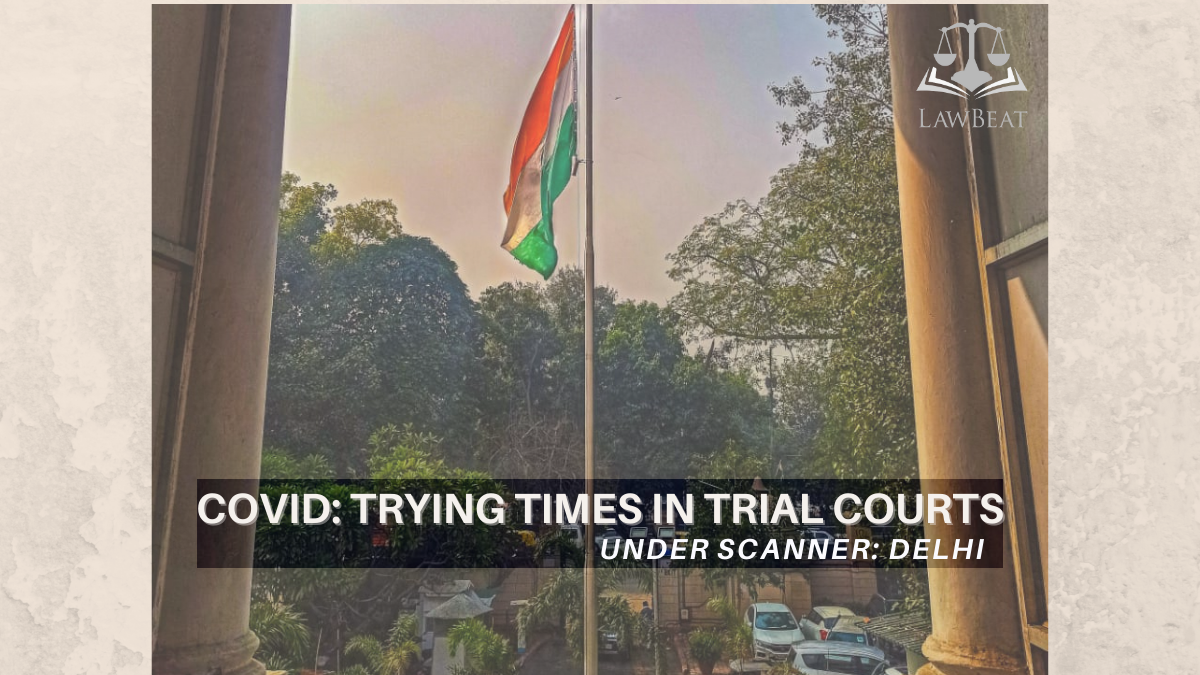 The pandemic posed to be an indomitable adversary to the nation. While the issues faced by the defense and the medical sectors were much talked about and their acts of bravery and selflessness much lauded, tribulations of those upholding the increasingly heavy pillars of justice on their bareback were sidelined, if not turned a blind eye to. We ventured into having a few conversation with advocates extensively practicing in the Trial Courts of Delhi, to gain a perspective into the grass root issues faced by them and their colleagues. This helped us gain some insights into the real-time issues faced by the justice delivery system.

The Supreme Court was faced with the unprecedented challenge, following which it passed an order on April 6, 2020 which mandated the High Courts to hear the proceedings on online platforms such as ‘Cisco Webex’, ‘Zoom’ and ‘google meet’ among others, and also to draft guidelines with respect to the virtual hearings and functioning of the virtual courts. Even though the inertia of the pandemic on the justice system had been overcome, yet there remained many hurdles for it to be back to its previous speed such as, the technological challenges faced by a majority of the elderly and less advantaged advocated of the nation, the pendency shooting through the roof or the fact that until very recently only matters considered ‘very urgent’ were heard.

Through an extensive process of interviews and research the issues we’ve uncovered are as follows:

The advocates very passionately addressed procedural impediments they faced in the trial hearings. Even if the connectivity is good and the online infrastructure well established, there still remains the issue that cross-examinations and depositions are all but impossible virtually.

Another advocate chimed in stating that it is most crucial to be judge a person’s demeanor which becomes all but impossible in an online hearing. One cannot avidly push for reliefs with equal vigor or as efficaciously.

Moreover, the butterfly effect of the orders of higher courts can be felt in waves of much wanted relief and blatant abuse of the due consideration that is being given two much brought up examples of the same is firstly, the Apex court’s exemption extended towards the delay by the police in the filing of a chargesheet and secondly the Delhi High Court’s order notifying that no ex-parte adverse order can be passed.

The virtual platform has proven to be a major handicap to many aged and experienced advocates who are not as technologically savvy. Initially it was a juggling act with neither the listing nor the mentioning system in place. The now smooth and efficient system in the beginning was and obstacle race that the advocates had to navigate through fulfilling their duty to their clients only they had to do it looking like the Lady Justice, blindfolded.

It still remains like that in many district courts, a stark difference can be seen between the district courts in the area of Delhi NCR as compared to those situated in Delhi NCT where the virtual platforms are either not set up well or still function in a haphazard manner. In an amused tone Advocate Anant Malik recalled,

"Judges used to vanish from hearings!"

Moreover, due to this sudden and drastic shift judges, operating from their residences did not have with them the complete digital records of the matters that were being heard, we were informed that this issue particularly arose in case of NCLT and NCLAT where in an attempt to keep the wheels of justice moving, they were being dragged from these muddy pathways and matters worth hundreds of crores where being decided in such a situation of judicial pathos.

It is important to note that at the level of District Court's, the pendency with respect to cases has skyrocketed. Advocate Anant Malik with much patience and clarity, explained to us that there are two types of pendency's that exist in courts today.
First is the backlog of cases that came under the category of ‘very urgent’. These include mainly bail and stay matters that were filed during the pandemic.

Second are the barrage existing cases that were not taken up during the pandemic. The system that was already slow has now come to function at a snail’s pace. Due to the poor infrastructure and the alarming number of vacancies in the judiciary, it is quite a feasible option to proceed with both physical and virtual hearing and appoint more judges such as was not possible during physical court hearings.

Two Advocates that we spoke with, stated that at the beginning of February the court adjourned their cases to April and July respectively.

One extremely untouched yet pertinent matter of consideration that has not been brought up is that of the Judge’s roster for physical hearing. Many benches change periodically due to the partial re-opening of courts and many a times, the judge may not be as well-acquainted with the case and it's previous history of the case. For example, several judges end up presiding over a single application leading to futility in the name of speedy justice and effective remedies.

There is much needed appreciation and societal recognition severely lacking when it comes to taking into cognizance the magnitude of pro bono work undertaken by advocates during the pandemic to aid the underprivileged and needy.

‘My desire is not to get recognized. My desire is to get much needed justice for that one person’

When asked about the recognition the effort and the toil put into those cases, she replied that as a while as a lawyer investing in each case takes a lot of time and effort and though being paid for it is nice, but if one is working towards justice, they don’t really require a pat on their backs for a job well done.

This brings us to an additional consideration while each silent sentinel echoed the humble voice of Advocate Keerti, they all stated that the pandemic bought about a paradoxical situation.

She added that even though there was an onslaught of domestic violence related cases, maintenance cases and cheque bounce cases, yet there was a huge stretch of time when the ordinary trial court advocate had gone without work for some months and as work started to flow in without or with delayed payment for that work done.

During the pandemic, many advocate faced immense economic crisis, yet they walked on taking up pro bono cases on account of their own time, money and effort while having to navigate through drastic unprecedented changes and difficulties.