"Even during the Salman Khan appeal, the task at hand was a mountain to climb, Everest no less": Sr. Adv. Amit Desai on uphill climbs in litigation, and how to ace them 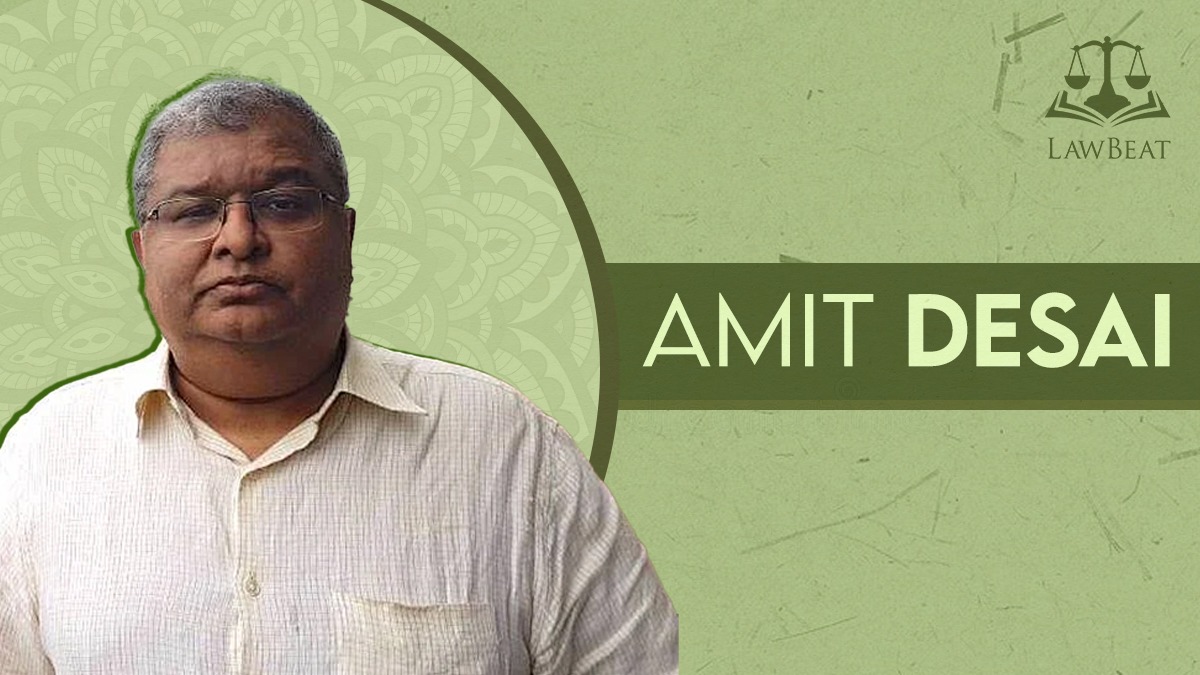 Sr. Adv. Amit Desai needs no introduction, he was in fact the first of the seniors from Bombay to jot his anecdotes down and send them to me by email. I am very glad that his words of wisdom will reach to a larger audience through this platform.

My friend, Ms Pragya Sharma reached out to seniors from the Bombay Bar. It was through her that I got in touch with Mr. Desai. I remember her calling me frantically  to inform me that Mr. Desai had agreed to share his anecdotes for the project.

She told me “You have got another superstar’s anecdotes for the project! Mr. Desai is busy all the time. For him to have taken out sometime to write these is definitely a big deal!”

Big deal indeed; the rationale behind this project is to ensure that lawyers from across the country have access to both funny and serious experiences of senior lawyers. It was a conscious decision to ensure that I don’t get anecdotes only from seniors whom I can get in touch with.

Since Mr. Amit Desai has written these anecdotes himself, I will not write over it.

Having practised for almost 40 years and visited trial courts across the length and breadth of the country from Mumbai to Kolkata, Delhi to Bengaluru, Chennai, Cochin and everywhere in between, I have cherished and enjoyed the trial experiences.

Trial courts, being the courts where a litigation truly begins, offer much learning. They provide a much wider canvas to apply legal acumen and  build a case from ground up. They prepared me for the twists and turns in a matter, the importance of preparation and arguing the matter as if they were going to eventually reach the Supreme Court.

A trial lawyer’s true test, much like that of a footballer, is his ability to keep control and dribble the ball (his advocacy, legal acumen, etc.) while the opponents come at him with everything they have; until, eventually the footballer reaches the goalkeeper (the judge) and makes the final kick to try and score a goal.

Some experiences leave an indelible mark on one’s memory. It is ones duty to accept any brief and not choose the one which you believe is an obvious winner – no good lawyer can ever claim to have 100% success rate. I have dealt with many cases of which I believed some had strong facts and some not so strong. But I was never discouraged.

I still remember, many years ago, when I was appearing before the division bench of Justice Radhakarishnan and Justice Smt. Dalvi, in the Bombay High Court, starting on the back foot, I had to toil hard to get the judges even to let me present the case.

The judges had read the brief and had made up their minds against my clients. Yet, advocacy is about not giving up and trying to put your best arguments forward persuasively.

Taking the judges through the record and getting them to see my client’s side of the case was what I needed to do. At the end of this matter, the Judges were all praises and appreciated my efforts even though they rejected all my arguments.

The matter went on to the Supreme Court, once again, without much success. A lawyer’s duty is to do justice to the brief, no matter the facts and circumstances of the case. I often say, even Ajmal Kasab had a lawyer who admirably put across his case.

Even during the Salman Khan appeal, with the public perception being against my client, the task at hand was a mountain to climb, Everest no less.

The media, having already decided that he was guilty, got fresh energy from the finding of the Sessions Court. As much as we don’t want the noise outside the courtroom to influence the proceedings,  it always has some impact.

But then, these challenges make you work harder. The appeal was heard over several weeks, with the mountain being chipped block by block. Having gone through the evidence meticulously and minutely, and arguing the law, over time I finally convinced the judge that no case was made, ending the long-drawn arguments in the appeal with an acquittal by Justice A. R. Joshi.

Judges can be tough while dealing with the matter before them. But always remember they too are human.

So as a young lawyer, I, like many other senior and junior lawyers, was regularly appearing before the Special Court, headed by Hon’ble Justice S. N. Variava, set up in the Bombay High Court dealing with the Harshad Mehta security scam in 1992.

The Special Court Act had attached all properties of the notified parties, especially all the accused. Despite the attachment of all assets, lawyers and solicitors regularly kept appearing for them. The judge must have been wondering how all these notified parties could afford so many senior or junior lawyers when their assets were attached.

So after 6 to 8 months, with a mischievous smile on his face, one day in open court the judge jokingly asked all of us lawyers, “So how do you get paid your fees?” The question took everyone by surprise.

And after a pregnant pause when everyone's minds were scrambling as to how to answer the question, the judge laughingly and sarcastically said, “I suppose their friends and relatives must be paying the fees!” We all, with a nervous laughter across the court, readily and heartily agreed with his response. Fortunately no one received a midnight knock.