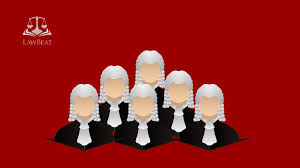 A usual scene that we witnessed in all movies (web series off late) growing up, Geeta wrapped in a red cloth, with an intention to arouse a feeling of guilt already, a setup with two ‘kathgharas’, and the judge hammering ‘order order’ with a gavel almost every second. These and the various undertones of ‘Adalat’ and the courtroom drama for a lawyer change in college (usually), but the general public, otherwise busy with the humdrum of life, would never sit down to realise the gravity of the false narrative created so far.

Then came Judge Judy, with a real judge, Justice Judy Sheindlin. Though the veracity is still doubted, the similarities could not be denied as well. But Judge Frank Caprio, set the stage for the ordinary prudent gentry to understand the nits and grits, and is touted to be the most beloved judge of all times. Why? Because he was seen!

Moving ahead in the direction, “seen” reminds of an effective Justice. The most sensational and memorable teachings in a law school are the rule of law, principles of natural justice, and justice not only be done, but should be “seen” to be done! This brings us to the next big sensation that the country and specifically more than 8 lakh people directly witnessed, live-streaming of 3 Constitution Benches of the Supreme Court. A Constitution Bench is set up to decides a case that involves interpretation of the Constitution on a substantial question of law. And transparency is a key feature of democracy, and of our Constitution. With that rationale, live proceedings on  September 27 were streamed, which must have been overwhelming for the public, where choice had to be made in 3 parallel live running Court proceedings, with constant attempts to juggle between the windows to consume everything.

However, that momentous position is at a nascent stage to become a routine, where copyright of the Court proceedings on YouTube are being pondered over, but is not an issue that will sustain for long, as the Supreme Court has clear intentions of setting up its own platform. The e-committee of the Court, under the leadership of Justice D.Y. Chandrachud is taking care of every aspect, every modality that can be included in the modus operandi of the live streaming and broadcasting mechanism.  And it becomes very important at this stage to know that it wasn't the first live streaming session of the pilot project. A ceremonial Bench of the then CJI N.V. Ramana on August 26, was also live streamed. And now it becomes even more relevant to note that even that wasn't the first, as the Gujarat High Court had already begun the process in July 2021.

Currently the High Courts of Gujarat, Orissa, Karnataka, Jharkhand, Patna and Madhya Pradesh are live streaming the Court Proceedings, while the others are also in the process.

The concerns now circumferencing the subject matter are, what and how the general eye would understand, the otherwise hard to get proceedings. How will the citizenry understand the head on collisions (for brevity) between the Bar and the Bench, that have otherwise sacrosanct relationships. But the point that we should not lose focus from is, what is there to hide? Advocates seeking adjournment, courts granting it, and litigants accepting it, is a matter that should be disclosed for eyes to believe. But the regular causes, reasons would be a little difficult to comprehend for a person otherwise oblivious of the court's functions. Therefore, the concern is not what could be out aloud, rather what could be perceived outright! But should that be enough to question the process in its entirety?

One definite positive is live streaming of the daily proceedings of the court for the public, and the reactions received by the Bench on certain matters, would definitely deter frivolous petitions asking for absurd directions with dull-witted objectives.

The aspects of essentiality of the feature has regularly been highlighted by various Judges. Justice Abhay S. Oka during a lecture, questioned that if parliamentary proceedings can be live streamed, then why shy away from the judicial proceedings

Setup by Swapnil Tripathi judgment in 2018,  suggested by the then Attorney General for India K.K. Venugopal, and a strong hustle-wrestle for the cause by Senior Advocate Indira Jaisingh, gave what we see today. The Bench was of the opinion that “....we hold that the cause brought before this Court by the protagonists in larger public interest, deserves acceptance so as to uphold the constitutional rights of the public and the litigants, in particular. In recognizing that court proceedings ought to be live streamed, this Court is mindful of and has strived to balance the various interests regarding administration of justice, including open justice, dignity and privacy of the participants to the proceedings and the majesty and decorum of the Courts”.

The most important feature for everybody to witness is a dive into the judicial proceedings, and a sneak peek into the otherwise hidden and discrete workings of the judges. Interestingly, one may find members of the executive and legislature active on social media, making reels and becoming stars, but you wouldn't find a judge doing the same.

But as we compare everything with the adjoining and far off jurisdictions, for analysis, let us again see, how do we fare on the comparative narrative.

1. Brazil allows live video and audio broadcast of Court proceedings, including the deliberations and voting process undertaken by the judges in court. And it has a purely dedicated channel for the same, with a name TV Justiça since 2002. However Trial Courts have been kept out of the purview. And the entire power to decide the relevant matter, rests with the Court.

2. The Chinese Supreme Court has allowed broadcasting of its ‘public hearings’ since 2016.

3. England Supreme Court allows live streaming with a one minute delay on its website, and only essential matters on its YouTube channel. However, it becomes pertinent to note that recording and broadcasting was a crime up until 2005.

4. In Germany, despite the suitable guidelines and provisions, it is still few and far between.

5. International Criminal Courts broadcast but with an half and hour delay.

Therefore, what is to be gathered is that all the international jurisdictions have some or the other congruent audio-video acts, that places embargo on the exercise, and further provides regulatory guidelines to be adhered to.

Significantly, trial courts have been kept out from the purview majorly. Ironically, most of them expressed a formal abhorrence for the practice earlier. But have now slowly and steadily accepted it with hesitation. And of course to each its own speed.

As it becomes hard to imagine to fit in the socks of the other, when you for sure have a bigger foot size, a digitised India with 5G network, and an absolute regard to the judicial setup necessitated in a democracy have begun to meet, the day is not far when the feature will become prominent, and the prominence will be featured as an example for the others.