Online Hearing Tales: "Are You At The Beach? Or At The Mountains?" 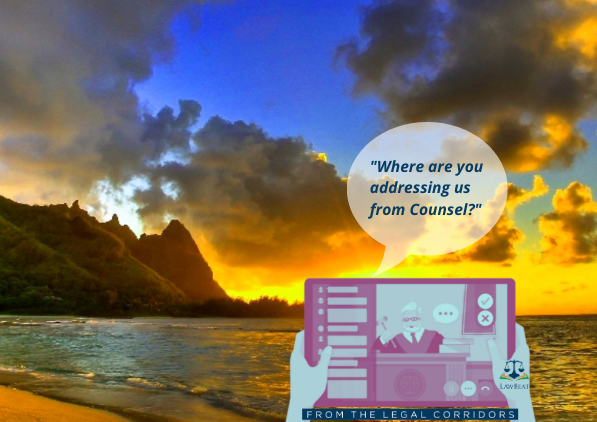 "The more things change, the more they remain the same"(or do they?)

A proverb we got accustomed to.

However, the pandemic altered the course of our lives. Mundane words and quotes made in passing have embarked a brand new meaning. Just like "Stay Positive!" is now a bad thing.

The pre-pandemic era saw the hustle and bustle of court's.

Lawyers and litigants rushing, making their way to courtrooms, clerks clutching on to their office files, pacing to and fro the corridors, trying catch a glimpse of the display board.

These mundane activities now seem to have unfurled ages ago. Most lawyer's today, yearn to get back to daily-court routine. Sip coffee with a colleague and race through legal corridors,

"The half empty cup of tea can wait. My matter has been called out!"

With Hearings at the Supreme Court of India moving online, lawyers are now able to appear remotely before the top court, which means that a hearing can be fixed for the next morning and a lawyer can drive down to the hills the night before (or even to the beach?). Lets also not discount art galleries. They are a beautiful place to work from.

"Where are you addressing us from Counsel?," Judges at Supreme Court of India are often heard asking during online court hearings.

The Chief Justice was heard saying,

"We are making lighter remarks to ease our pressure."

To this, Mr Rohatgi replied,

"I am easing my pressure by not being in Delhi, i am in Goa".

The Chief Justice remarked, "The blue pillar behind you is typical of Goa."

"I'm right on the waters. Your lordships can see the blue from here," said the Senior Lawyer

"We don't want to see. We are working!" said Chief Justice Bobde.

Courtroom Exchange: A tale of Art Galleries and Gardens

Another hilarious exchange took place in the Supreme Court when CJI Bobde asked a lawyer presenting before him:

“Mr Pathak, are you sitting in a garden?”

When the lawyer replied in the affirmative, the Chief Justice noted:

“Good good. It is better than sitting in an art gallery. It is also pleasant for us to look at!”

The "art gallery" jibe was a referral to former Advocate General Mukul Rohatgi’s background when he CJI Bobde had wondered if Advocate Rohatgi had shifted from a museum to an art gallery.

It had come after Rohatgi’s background was seen littered with statues which had led Rohatgi to explain:

“I'm sitting in my farmhouse. I shifted to the farm so that I can swim twice a day, your Lordships.”

Courtoom Exchange: A view of the Mountains

Senior Advocate Sidharth Luthra was recently found appearing in the Supreme Court recently with a view of the hills in the background.

When he appeared on screen, the Chief Justice asked:

"You are at a hill station?"

When the Senior Lawyer answered it in the affirmative, the CJI said,

"Stay there till the courts reopen, we will have some nice views to ourselves when you appear!"

Journalists across the country have reported witty exchanges between the bench and the bar. Online hearings have altered not only the justice delivery system, but also rendezvous of the legal fraternity.

(Sanya Talwar is the Editor at Lawbeat. She practiced in Courts for 4 years prior to taking up journalistic roles. She was last spotted at Live Law, where she reported for the Supreme Court of India)