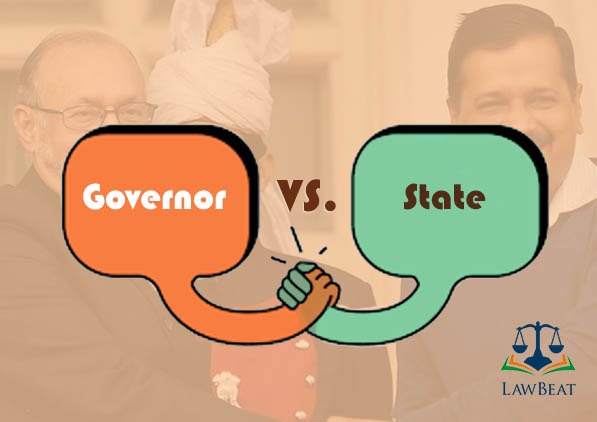 Recently notified Government of National Capital Territory of Delhi (Amendment) Act, 2021 has once again ignited the debate over power battle between the Governor/Lieutenant Governor office and State Legislature. The Constitution of India enunciate about the two power centers. One is Union and other is the State under the umbrella of federal structure. Their executive heads are President and the Governor. Both these centers work in tandem with one another in order to run the Constitutional machineries efficiently. The law-making power is bifurcated in accordance with three lists enshrined under Schedule 7 of the Indian Constitution. However, in case of repugnancy, the law made by the Parliament (Union) shall prevail, as mentioned under Article 254. Since India follows the principle of federal structure with strong centralizing tendency, accordingly the mammoth of power is vested and exercised by the President of India (inclusive of powers to appoint/remove the Governor of concerned States). The Governor has to act on the aid and advise tendered by Counsel of Ministers, headed by Chief Minister, in their respective states, alike what President does in Centre while dealing with the Prime Minister. One of the key business of Governor is to give his assent, following his satisfaction, on bills passed by state legislature. Thereafter, it culminates into the law of the concerned State. However, the Governor may send it for reconsideration with the message endorsed on it. Also, the governor may reserve the same for consideration of the President, as manifested from the literal reading of Article 200 of the Indian Constitution. Apparently, it signifies that Centre has a major voice in the decision making of the State. However, this may not be the true interpretation of the said article which tantamount influence over Governor’s power under Centre’s sweep. Mere fact of Governor being acting as appointee of Centre will not jeopardize his role in furthering ends of State government. The Constitutional framers had never envisaged such situation and therefore established federal structure to reduce any chance of political motivated interference from the Centre.

Whenever, the conflict has arisen between the two levels in India, Hon’ble Supreme Court of India has always stood to resolve the issue amicably, through its judicial wisdom, at various instances ranging from scrutinizing merits of imposition of Presidential rule to ordering trust vote. The concerned parties were restored back to normalcy amidst political crisis in various states.

The Lieutenant Governor of NCT Delhi exercise its duties by virtue of Article 239AA (inserted by 69th Amendment Act, 1991) under Indian Constitution. In Govt. of NCT of Delhi v. Union of India & Another (2018) SC, the constitutional bench of Hon’ble Supreme Court has ruled that the “LG is an administrative head in the limited sense, and is not a Governor. He is bound by the aid and advise of NCT Government in areas other than those exempted (like land, police and public order). Further, it also observed that LG must go for application of his mind before mechanically referring all matters to the President’s desk. Ostensibly, the latest enactment “Government of National Capital Territory of Delhi (Amendment) Act, 2021” waters down the power conferred upon Delhi elected government since it carries the impact of making Lieutenant Governor more powerful. However, the superficial inability of the Delhi government to tackle ongoing pandemic can be one of the reasons which triggered centre to step in and take control of the precarious situation. However, soon after the said Act came into force, it has been clarified by the Home Ministry that Government of National Capital Territory of Delhi (Amendment) Act, 2021 will not stifle the legal and constitutional responsibilities of the elected government. This assurance should certainly bring solace to the incumbent members of the Delhi legislative assembly. Harmonious exercise of the power, in existing state of affairs, can be the only outcome to quell instances of future political vendetta between two power centers.

The Floor test is ordered at Centre/respective States so that the party can prove its majority in the house, mostly when there is political instability, triggered by fall in minimum number of seats required by one party to retain in government. In Shivraj Singh Chouhan & Ors. v. Speaker Madhya Pradesh Legislative Assembly & Ors. Hon’ble Supreme Court has observed that the power of the Governor is not to be exercised for removing democratically elected government. Also, it observed that “the Governor is expected to discharge the role of a constitutional statesman.” Further, it held that “The idea underlying the trust vote in the ultimate analysis, is to uphold the political accountability of the elected government to the state legislature. Assertion of accountability is a mirror image of the collective responsibility of the government to the legislature.” It also said that “However, it is important to note that in directing a trust vote, the Governor does not favour a particular political party. It is inevitable that the specific timing of a trust vote may tilt the balance towards the party possessing a majority at the time the trust vote is directed. All political parties are equally at risk of losing the support of their elected legislators, just as the legislators are at risk of losing the vote of the electorate.” The Court also opined that the Governor’s order is not free from the clutches of judicial review.

Exercise of power under Article 163

Article 163 of the Indian Constitution categorically provides for Council of Ministers at State level. In Nabam Rebia & Bamang Felix v. Deputy Speaker & Ors. the five-judge bench of Hon’ble Apex Court has laid down that the discretionary power under Article 163 is subject to judicial review. Furthermore, the court observed that the “power to summon” lies with the Governor under Article 174, cannot be exercised without consulting Chief Minister or the President.

Appeal to Work in Unison

In one of its ruling, Madras High Court in the case of conflict between LG and government, observed that both must work in unison and not in division. Administrator [Lieutenant Governor (LG) in Union Territory] does not have a right to intervene in day-to-day activities of the government. Further, the Court held that the Administrator is bound by the aid and advice of Council of Ministers in matters of legislative competence. Though Administrator may differ with the government based on rationale with respect to its functions.

In the democratic setup, free play of Constitutional organs is anticipated without any political interference or influence. Arbitrary exercise of power is impermissible in any Nation embarking on Constitutional principles. Indeed, the instance of horse trading might be witnessed in the past, which was fought out in the Courts vested with impeccable judges, who had pronounced fantabulous judgments while dispensing justice. The Parliament needs to formulate more stringent laws, though we have legislation like anti-defection under Schedule 10 in place, to curb instances of horse trading. In the preceding year, Hon’ble Mr. Justice D.Y. Chandrachud has pitched for the improvised laws and opined that law needs to be evolved to address issues like poaching of legislature, political bargain and horse trading. Therefore, we can say that frequent instances of political distress between the state government and Governor has to be halted by promoting concord between the two. A viable modus operandi adopted in due course will pave way for the Nation building. The Indian judiciary is always there to fortify the Constitutional values. Any foul play posing threat to Constitutional framework will be plucked out by the proactive judicial institutions in India. We should strictly adhere to the policies designed by Constitution framers. Good governance model needs to be adopted diligently between two power Centers keeping aside personal woes, for ensuring sky-scraping economic growth of the Nation.