The Problem With Court Reporting In India 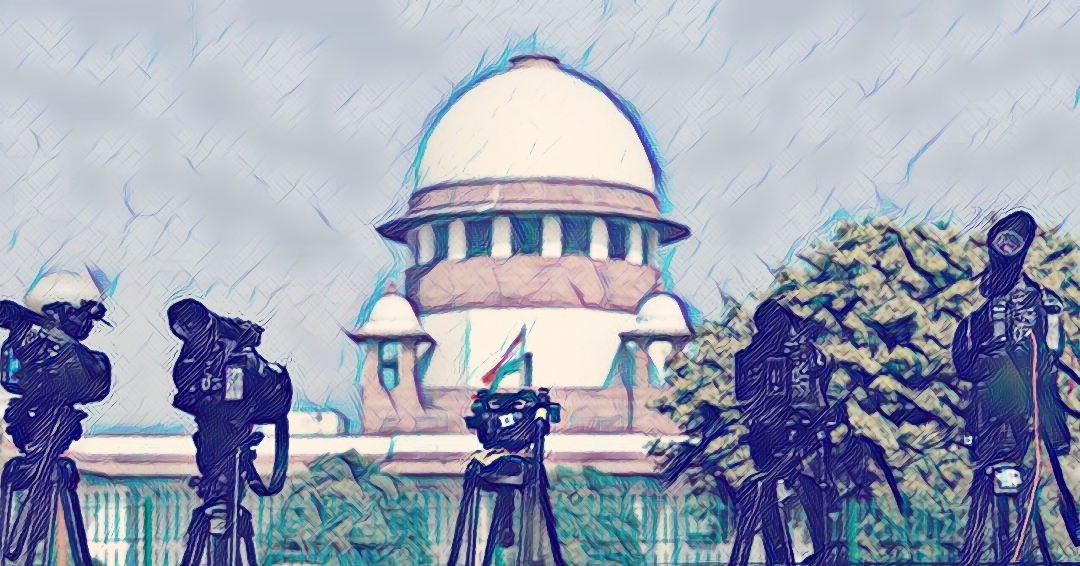 The Supreme Court Judgement in Navtej Singh Johar vs UOI was and continues to be wrongly reported as “Article 377” being “Annulled” or “Struck Down”, while another leading news channel decided in 2016, a full year before the Supreme Court judgement on the matter, that the Obiter Dictum by the Allahabad High Court in a case meant that Triple Talaq had been declared unconstitutional (they later amended the report).

Such reporting might prima facie appear harmless, a simple mistake even, but can broaden into something much larger with unfortunate consequences.

In 2018, the entire nation stood shaken as reports of the abduction, gang rape and subsequent murder of an 8-year-old girl from Rasana, a village near Kathua, Jammu and Kashmir, emerged. Due to the nature of the crime and the dispute riddled territory it arose out from; the incident was quickly given a communal twist. While the media sensationalised every little detail to ensure maximum TRP, somewhere along the line, the ‘sensationalism’ started to fall closer to ‘falseness’. On 20th April, 2018, the front page of Dainik Jagran was splashed with the headlines “The girl in Kathua was not raped.”

The Jammu and Kashmir police, a day later, issued a statement on its official twitter page clarifying that the medical evidence on record had established beyond doubt that the victim was subject to sexual assault. However, as it is with fake news, the initial coverage by Dainik Jagran reached a much wider audience, spawned on by WhatsApp forwards and media outlets recognising the headline worthy content.

Dainik Jagran, in its defence said that their report was based on a conversation they had had with the counsel for the defence and the fact that the medical report did not mention the term ‘rape’ or ‘sexual assault’.

The Government has clear guidelines which ask medical examiners to not use the terms sexual assault in reports. Further, the issue of whether rape occurred or not is a legal issue and the medical report can only comment on the occurrence of sexual activity.

Dainik Jagran was not the first and will not be the only news outlet to report faulty legal information. ‘Sensation over sense’ coverage by mainstream media, especially for commercial advantage has been an increasingly glaring issue and the Courts have taken into account irresponsible court reporting practices.

The Calcutta High Court, in an order dated 28th April 2020, in the writ petition of Dr. Fuad Halim Vs State of West Bengal & Others urged journalists and reporters to refer to the court websites and “dissuade themselves from propagating or publicizing the orders.”

The fact is that legal reporting is an arena which requires an acute understanding of the nuances of the law which can be difficult for the common man to make sense of. The due process of law is a complicated one and so is the language that comes with it, so much so that interpretation of statutes and acts is a separate subject taught in law schools with several books written on the topic.

A single court case in India can span over years, with several court orders and arguments advanced by the parties. A reporter, attending a sole hearing, without reading or understanding the basic facts or premise of the case, can easily misconstrue and misunderstand the entire matter. Take for example a recent writ petition filed in the Delhi High Court against the negligence and inaction of the treatment of a covid patient in Rao Tula Ram Hospital which was reported as an ‘Ex – gratia plea’. A simple reading of the petition and or the order of the High Court is enough to know that the counsel for the petitioners referred to a previous ‘ex gratia amount’ set by the NDMC to decide upon the compensation amount that should be awarded. By terming the entire plea as ‘ex gratia’, the base intention behind the petition was nullified as in an ex-gratia plea, the party does not accept any legal obligation, whereas the petitioners fully intend to hold the Delhi Government and the hospital responsible.

One might argue that such integrities are difficult for a non-law degree holder to understand. The Supreme Court on 30th July 2015 released the amended Norms for Accreditation of the Legal Correspondents in the Supreme Court of India which said that any journalist or correspondent who wishes to regularly report Supreme Court proceedings must have a law degree.

Is holding a law degree really a solution?

(On 24th August 2018, the Norms for Accreditation were further amended to include a clause which allowed the CJI to waive off this requirement at his discretion, provided the candidate had the necessary experience.)

Legal reporting leaves a large potential for reporters to twist the facts and release coverage that suits their agenda. In 2020, Zee News led a crusade against the Tablighi Jamaat, showing non-stop coverage, and holding them responsible for the coronavirus pandemic in the country. An investigation ensued and cases were filed in the High Courts across the country. They were quickly handled, with the cases being dismissed and FIRs being quashed by the Bombay High Court, Zee News reported that two pleas by the Jamaat had been disposed off, with a direction to shift all Jamaatis from quarantines zones to nine designated places. The report further called this a “a blow to Tablighi Jamaat attendees” and the channel released a ‘Breaking News’ segment iterating the stance. A reading of the order makes it clear that application was put forth by the Petitioners to disclose the places for alternate accommodation of 955 foreign nationals and the same was allowed by the court with no objections being raised by the respondents.

Interestingly, Zee did manage to get other points, such as the fact that the community had agreed to foot the bill for the accommodations and that any shifting was to be made after coordinating with the Delhi Police. The words ‘Disposed off’ were misconstrued and misrepresented.

Such blatant unethical reporting goes beyond the scope of holding a law degree and calls for a Norm of Conduct that specially focuses on court reporting.

Norms Of Journalistic Conduct under the Press Council Act, 1978 and Programme Code under section 5 of the Cable Television Networks Regulation) Act, 1995 function as the code of ethics for the reporting of news in India and the same were applied to online news publishers by the latest IT guidelines. The Press Council Norms do caution the correspondent on reporting on Judicial Matters and Acts, but no specific guidelines exist for legal commentaries or court reporting.

In the case of Dainik Jagran’s reporting, who should assume responsibility for the report? The Defence’s legal counsel, who provided his biased opinion in a bid to favour his case, or the reporter who drafted the piece?

The Bar Council’s Rules on Professional Standards do not govern a lawyer’s commentary or expert opinion. Should it be considered ethical for a lawyer to get paid to provide his opinion on a news channel? Can such an opinion even be considered accurate?

For the average man, who relies on mass media, such reporting can lead to widespread disinformation, and false news and belief.

According to Justice Sanjay Kaul of the Supreme Court, false information is more dangerous than the coronavirus. In a community as diverse as ours, a small spark is enough to ignite tensions.

A comprehensive code of ethics that provides for stringent punitive measures in case of violations can be an effective tool to regulate court reporting.

First, it is important to set a bar for competence.

The Norms for Accreditation of the Legal Correspondents in the Supreme Court of India can be extended to cover all court proceedings and not just the Supreme Court’s. A correspondent working on a court reporting should know the difference between ‘Section’ and ‘Article’ and understand the nature of ‘Obiter Dicta’ and ‘Ratio Decidendi’. Reports must also be verified by a competent individual with not just legal knowledge but experience in the field to ensure accuracy.

Second, the source of the report must be standardised.

A report or news segment should not be allowed to use a lawyer or legal expert with an interest in the case as a legal source. This includes lawyers or professionals that aren’t just attached to the case but also share any inter – personal relationship with the team working on the particular case. The reporting should rely, as the Calcutta High Court pointed out, on authentic court orders and judgements. News publishers, especially on the online forum, can attach a copy of the same with their report.

Third, polarisation and sensationalisation of court proceedings must be penalised.

There should be strict norms regulating the front-page headlines and breaking news segments with regard to judicial acts. Hyperbole and use of the Court’s words to champion a supposed cause by the media should attract strict penalties. Court proceedings should, as much as possible, be reported in a plain and factual manner. News media and journalist's covering Court news shouldn’t be allowed to speculate or suggest outcomes of the case or indicate a guilty party before the verdict is out.

Fourth, lazy journalism must be discouraged.

Any reporter working on a court’s proceedings must be familiar with the case in its entirety, from the petitions to any and all interim orders. The reporter must also attend and or read the court transcripts and uploaded orders and judgements thoroughly before forming a piece. Such due diligence becomes casualty to tight deadlines and the desire of media outlets to constantly pump out content to remain on top of the game.

Strict norms will force media outlets to throw caution to the wind and fact check their reports before publishing them. If nothing else, this would give us respite from the frequent use of ‘manslaughter’ and ‘felony’, terms that do not exist in the Indian Judicial system but have become ingrained in our vocabulary thanks to American TV shows.