“Tandav” Of A Self-Proclaimed Political Thriller 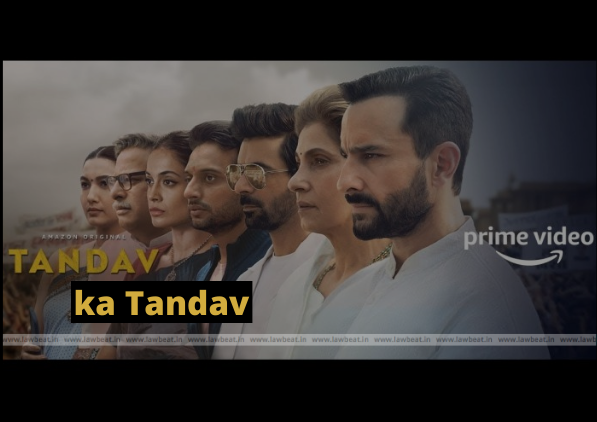 Unless you live under a huge rock or are practicing social distancing from social and news media outlets, you’d have heard of the recent social media campaign and subsequent court proceedings against the makers of the self-proclaimed “political – thriller” Tandav for allegedly hurting religious sentiments

Cases have been filed filed u/s 200 of the Code of Criminal Procedure and the complainant has accused the defendants of offences under Sections 153A, 295A, 505(1)(b), 505(2), 34 of the IPC and Sections 66/67A of the IT Act 2000 against the makers of the series, which means, in addition to facing the flak for his stoic acting, poor Mohd. Zeeshan Ayubb Khan has to pay to hire a top-notch lawyer to stand in front of the Supreme Court and convince the judge to let the actor off the hook.

The law stipulates provisions to prosecute and convict people for Promoting enmity between different groups on grounds and doing acts prejudicial to maintenance of harmony; Deliberate and malicious acts, intended to outrage reli­gious feelings of any class by insulting its religion or reli­gious beliefs. Further to ensure not just the producer and or director but the entire cast and crew is held liable, the police also filed a charge under Section 34 of acts done by several persons in furtherance of common intention.

A conviction under these charges is subject to facts alone. The Apex Court in its judgement, while adjudicating upon a case where MS Dhoni was portrayed as Lord Vishnu on a magazine cover said Insults to religion offered unwittingly or carelessly or without any deliberate or malicious intention to outrage the religious feelings of that class do not come within the section and further commented upon the rampant misuse of the provision.

Going back to poor Zeeshan Khan’s case, the fact that he’s a mere actor representing a character might not hold much merit. True fans will remember the controversy that followed after Maggi was banned and talks of initiating proceedings against Amitabh Bacchan and others who endorsed the product were under way. The government made its stance clear by solidifying the concept in the Consumer Protection Act: Celebrities can no longer feign ignorance and are responsible for the products they endorse.

One thing that absolutely baffles me is the charge of 6/67A of Information Technology Acts, which clarifies and lists down the punishments for offence meted out in Section 43, which hilariously, deals with destruction of computer equipment manually or by way of a virus. Is this the police’s way of saying the series is like a destructive virus that will destroy your computer and subtly warn the public of the dangers of watching it?

While still a few years away from qualifying the judiciary exams, I cannot pass judgement on the appropriateness or ridiculousness of the cases filed. I do however, feel perfectly comfortable and safe passing judgement on the ridiculousness and inappropriateness of the TV show. The Supreme Court should’ve imposed a fine upon the makers for the sheer fact that inspite of a stellar cast, the show is absolutely horrible (emphasis supplied). I would also like to go on and partake in the speculation that it was the makers themselves who got the cases filed against them to generate publicity and coerce the (so called) liberal audience into watching the show. A charge of common intention to further the intention of producing  a terrible  show must be levied against the makers.

The court having refused to quash the FIR is either misreported as a steep miscarriage of justice by some media and web portals. Others are rejoicing the  issuance of notice to the prayer for clubbing of FIR’s as a big win.

For Tandaav, if your lawyers do a better job than your cast and crew, hopefully the filing of these FIRs would be the only memorable thing about the show.