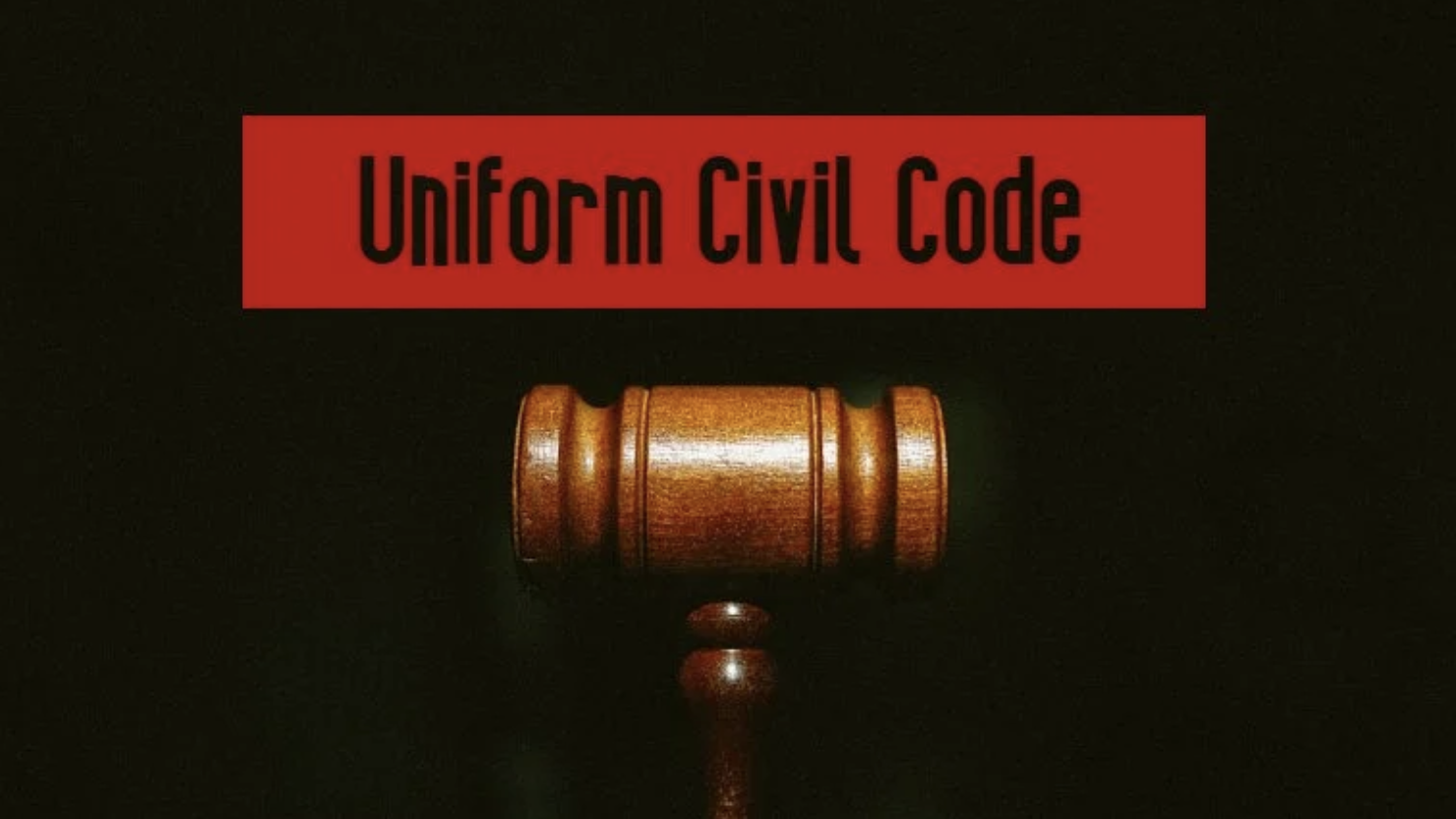 India being a multicultural nation should allow each community to have its own personal laws such as marriage, divorce or inheritance or should all Indians follow a Uniform Code?

Uniform civil code within India, aims to change personal laws based on the customs of religious communities with a common set of laws governing all citizens of India. Uniform civil code first gained significance, when a voice was raised in the 1930s by the All India Women's Conference, looking for equal rights for women, irrespective of religion, in personal laws such as marriage, inheritance, succession and divorce.

It is important to understand the compulsions of Constituent Assembly and Parliament of India at the sensitive time of framing constitution. They must have anticipated the impositions of single law upon different religious communities amidst insecurities of a new nation. Hoping for the conducive political and religious environment, it was left as a directive principles of the constitution.

History of personal laws in India

India is a land of diverse cultures, communities, religions and each has their own unique practice of personal laws in family life, succession planning, divorce, maintenance and adoption. Many laws are unfair to children & women in many ways. Personal laws can be practised by any religion however, it cannot violate constitutional rights.
When we see the historical aspect of personal laws, it was codified by Shri Baba Bhim Rao Ambedkar in 1950,s. Though it aimed at removing distinct practices but inequalities between men and women persisted.

Emergence of voice for uniform civil code in India

Voice for one nation one law i.e. uniform civil code has gained momentum recently because  many minority women affected by harsh personal laws, have begun knocking doors of the apex court to protect their fundamental right to equality under article 14 of Indian constitution. Seeing the developments, legislature has also stepped up process by asking law commission to suggest the ways of implementation of uniform civil code.

Till now,  Muslim personal law has not been codified by Parliament, except through the Shariat Act of 1937 and the Muslim Women (Protection of Rights of Divorce) Act of 1986. Judges have to rely on Islamic jurisprudence in a case-by-case manner. The Bharatiya Muslim Mahila Andolan, which fought triple talaq in court, has sought codification of Muslim law to remove unjust and arbitrary practices.

Though through judiciary and legislation there has been some changes in personal laws.

Hindu succession was reformed by Parliament in 2005, and Christian divorce rights were made gender equal in 2001. The courts have also steadily affirmed women's rights of maintenance, adoption, etc in various judgments, strengthening reform in minority communities.

Who are the advocates of Uniform civil code?

Hindu community personal law practices was codified through parliament and in order to bring similar discipline among all they are real advocates of uniform civil code. Then, there are some who feels that minority personal laws discriminate against women and children in marriage, adoption and maintenance laws hence they should be bought under the same ambit of codified laws.

Who are against idea of Uniform civil code?

Women movement groups, affected people from minority communities and people with multicultural secular ideology resist the implementation of uniform civil code. They resist at removing gender bias within current set up of personal laws and promoting fair, transparent, uniform and similar laws for all citizens throughout country.

There is a religious perspective as well as people feel sense of identity within their religion. By implementation of uniform civil code there can be sense of loss to religious & cultural sentiment of individuals. Hence, some fear for loss of identity.

Then there is economic perspective. Many personal laws are economic in nature. As mentioned in the Section 3(1) (a) of the Muslim Women (Protection of Rights on Divorce) Act, 1986 which states that “a reasonable and fair provision and maintenance to be made and paid to her within the iddat period by her former husband”. Here, in cases like the Shah Bano case in the landmark decision it was held that a Muslim woman could obtain maintenance under Section 125 of the Code of Criminal Procedure. Uniform civil code will have to be implemented keeping in mind gender equality. If the woman is supposed to bring up the children the husband could pay for maintenance of the children. It may be challenging to implement and draft a law that is fair to all gender.

Then there is political perspective. With about 79.8% population of Hindus, it is believed that while drafting the Uniform Civil code it will cater to its majority. There can be an argument that adoption of uniform civil code will be a move to check the belief of minority population in India. To quote Senior Congress leader Jairam Ramesh,

“The demand for UCC is a cloak for imposing Hindu Personal Law, which is actually deeply anti-women and has been made progressively more and more pro-women,”

An ideal Uniform Civil Code is easier to discuss than to enact. Till now there has never been a clear draft of such a code. It will lead to restructuring of may laws and create an unbiased neutral standard.. While polygamy and autocratic divorce associated with Muslim personal would go, so would the tax advantages of the Hindu undivided family. Distinctive practices of Buddhism, Jainism and Sikhism might also have to end, in the domain of family law.

Recently,  Supreme Court has directed Union government to inform the court about the government decision on the issue of uniform civil code within a month. This direction was followed after the Court’s hearing of a petition filed before it by a Christian husband who had challenged the legality of Christian personal law as being antithesis to Constitutional norms (Right to equality) that prescribes two years minimum period of separation before filing a divorce petition even though, the same is through the mutual consent of both the partners. Though this is one of the many examples of irregularities prevalent in various personal laws practised by many religious communities in India which have basis of not only conflicting ideologies but also have different take on secular matters like Inheritance, adoption, marital separation, maintenance etc

At this moment, dream of unified and integrated India in matters of personal laws seems a big challenge.  Imbued by the same aspiration, the Constitution makers thus inserted a special provision in the Constitution under Article 44 vide Directive principles of State Policy enjoining the state towards establishing a Uniform Civil Code for the citizens of this country so that a uniform system of laws could be established in this country in purely secular matters like marriage, divorce and inheritance; after all human rights make no distinction between one religion and the other.

Following points were considered before inclusion of uniform civil code in directive principles.

1.      That uniform law in all matters would promote national unity.

2.      Areas of IPC and CPC already had a uniformity of law throughout India except in the state of Jammu and Kashmir.

3.      That personal law may be different in each religion; there was nothing sacrosanct about them.

4.      That there should be separation of religious matters and matters of law like inheritance, marriage, divorce, adoption etc.

India needs Uniform civil code as more than 25% minority population in India especially women and children have bear brunt of autocratic and discriminatory personal laws. There are countless reported incidents where women have been thrown out of their matrimonial home and they don’t have any remedy in court of law. Many children are deprived from legitimate adoption and rightful succession. This all happens in the shield of redundant and decades back formed personal laws.

Lawmakers in India will have to think on the lines that law be divorced from religion in all senses. Implementation of uniform civil code will not only  strengthen the secular structure of India but much of the present day voices of division and separation on religious lines prevalent in society showing their ugly face now and then. Having these anomalies being contained, India will certainly emerge as integrated and unified nation.

Since independence no constructive attempt has so far been made in implementation of uniform civil code. The only visible step was codification and secularization of Hindu laws like Hindu marriage act, Maintainence and adotion act etc. It is pertinent to mention that Jawahar lal Nehru government assured muslim politicians that personal law practices with Islamic approvals whether unjust or unfair stand above fundamental rights, including the right to equality under article 14. However, Nehru's government did not hesitate to roadroller out of existence the vast diversity among Hindu sub groups with the badly crafted Hindu code bill in the 1950s, followed by many amendments by successive Congress governments.

The current BJP government also seems misguided and in hurry with no clear vision for gender just laws. It seems to be in hurry to introduce uniform civil code with an aim of banishing Muslim personal law. Instead of relying solely upon law commission reports why government should not act to initiate a debate and build a healthy consensus over this issue. However, they have found a support from judiciary with recent judgments like banning of triple talaq by apex court.

People who oppose implementation of Uniform civil code might believe that it would lead to an interference to their freedom of conscience or free profession or practice of religion by being imposed with a uniform code for all religion, they should however note that any secular activity whether, marriage, separation or inheritance or any other secular activity associated with a religious practice has already been exempted by the Constitution itself from the guarantee of this religious freedom. Hence, it could plausibly be argued that personal laws purely pertain to secular activities and hence fall within the regulatory power of the state just like other activities such as morality, economic interests or health of the society etc.

India will benefit from Uniform civil code as it will:

· It will provide equal status to all citizens irrespective of religion.

· It will promote gender parity.

· It will unify and integrate whole of nation.

· It will eliminate issue change in existing personal laws.

· It will eliminate religious bias in shield of personal laws.

There is obvious apprehension that implementation of uniform civil code is just another exercise to impose a majoritarian way of living. Before its implementation, genuine attempts must be made to create awareness and educate masses, especially minorities, about its advantages. To gradually and steadily eliminate laws that aims to benefit one particular religion and not the others, so as to remove any doubts of being imposed by laws that are favorable to the majority.

Once the UCC is formulated across the nation, India will undergo another social reform in this century. For instance, in Indian context, Muslim women are denied with personal laws in relation to marriage, divorce etc. On contrary, various Muslim nations like Pakistan, Bangladesh, Turkey, Morocco etc women enjoy codified personal laws. So after the implementation of UCC Indian women [especially Muslims, Christians etc] will also enjoy a codified personal law. Therefore, a stepping stone towards another social reform across the country.

Still, the question remains unanswered.
Isn't it high time that Muslim and Christian personal Laws are also be codified the way Hindu personal laws were codified in 1950's?