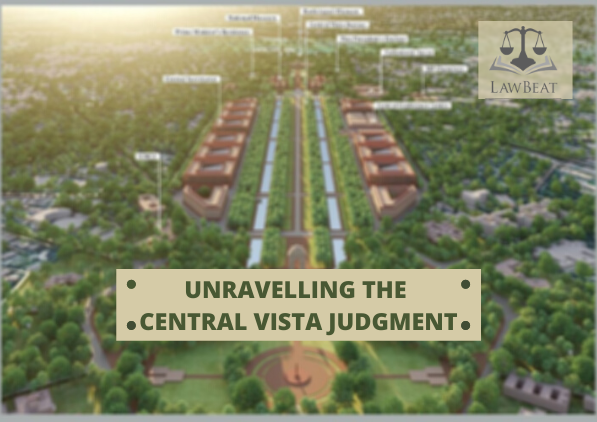 Recently, the Supreme Court of India upheld permissions granted to the Central Vista Project by a 2:1 majority in the case of Rajeev Suri Vs. Union of India.

The need for effectuating the Central Vista Project was envisaged in the creation of a larger working space for efficient functioning of the highest legislative wing of the nation as well as for integrating the administrative blocks for ministries/ departments presently located in different locations on rental basis.

In the expansive 661-page judgment, the Apex Court has extrapolated several discussions that rest at the core of Constitutional tenets.

One of the central issues discussed by the Court pertains to an examination of whether the concept of Rule of Law in India is akin to a democratic due process or not.

The interpretation of the petitioner’s in the instant case is different from that of Rodney A. Smolla who defined it as a negative concept i.e., one that diminishes constitutional protections rather than enhancing them. This analogy was based on the decision of the U.S. Supreme Court in the case of Bishop v. Wood 426 U.S. 341 (1976) which was a culmination of prior decisions on termination from public employment. In a plethora of cases, the U.S. Apex Court made a departure from due process clause as enshrined in 14th amendment of the US Constitution on the premise that there are some processes in the Government wherein due process clause may not be imported. The 14th Amendment was interpreted to be operative only when a person’s life, liberty or property and is understood as an evolution of due process into democratic due process.

This can thus be concluded to understand that:

1. Due process is envisaged in matters pertaining to deprivation of individual rights;
2. The entitlement of a right, claimed to be deprived, is a prerequisite;
3. Prove deprivation in order to remedy it;
4. Even in U.S., there is judicial acceptance of the tenet that the requirement of due process cannot be enforced in all Government processes;
5. There can be situations when existence of duly enacted and valid statutes may preclude the application of the principle of due process in adjudication.

In India, the history of due process dates back to the Constituent Assembly debates where Pandit Shri Thakur Das Bhargava, proposed the substitution of “procedure established by law” with “due process of law”. The proposal was rejected for lack of uniformity in the judicial decisions on this point in the US apex court rulings and on the distinction between the two being primarily on the extents and scope of judicial review that Indian courts would be empowered with.

Dr. Ambedkar said “…The 'due process' clause, in my judgment, would give the judiciary the power to question the law made by the legislature on another ground. That ground would be whether that law is in keeping with certain fundamental principles relating to the rights of the individual…”.

In this context, the court held [In Central Vista judgment] that in India, the understanding was that an effective check on the administrative decisions was not by applying a higher bench mark than the statutory defined/articulated obligations. It was to be under the scheme provided by the Constitution wherein “law” is made subject to all the provisions of Part-III depending on the nature of action and nature of consequence on the rights. As such, a distinction between executive action which has a direct bearing on personal liberty of individual; and executive action which comprises of ministerial/administrative functions with no direct impact on individual liberties needs to be drawn.

It is pertinent to note that the India interpretation has seen a change since Maneka Gandhi's case to more recent times in that of Sunil Batra, where dimensions came to be added to increase the fairness of procedure so as to make it more exacting for the executive to put curbs on personal liberty of an individual.

But in Rajbala and Ors. v. State of Haryana and Ors, the Apex court observed the absence of the doctrine of substantive due process in the Indian Constitution.

More recently, even in the case of K.S. Puttaswamy, the court observed the deliberate intent of the constitution drafters in deleting the expression “due process of law”. The court pointed out the vagaries of the decision-making process in the US involving interpretation of the due process clause as being one of the reasons for the deliberate deletion of the phrase.

On this premise the court concluded that in the present scenario, there is no shift in the India trajectory on this point and as such the petitioner have failed to establish the deprivation of personal liberty or life for the burden to shift on the State to either show the absence of restrictions or justification of restrictions within the permissible exceptions of Part-III. It further elaborated upon its role of being an equaliser, ensuring the flow of decisions from the executive to the citizens and not that of an organ to impose versions of good governance upon the Government under the pretext of Rule of Law in exercise of Judicial Review.

Reading judicial review as evolved over time in various rulings with the Rule of Law interpretation, the court held that procedure to be deployed in ordinary course of administrative action is not for the Courts to decide. Consistency in interpretation of Rule of Law can’t be achieved in stating that statutory scheme laying down the procedure is not good enough and a new standard of democratic due process ought to have been deployed by the executive. The purview of judicial is restricted to examine the legality on the touchstone of constitutional values and the procedure prescribed by law in that regard. Thus, sole concern of the Court is to look at the relevancy of the material relied upon to take a decision in order to see that the decision is not devoid of application of mind as provision for review of law is made in the Constitution itself wherein the ‘law’ in ‘Rule of Law’ is required to be good in the realm of the Constitution. This is based on the “constitutional due process” prevalent in India.

On the point of expanding the purview of judicial review, the court while rejecting the proponent of treating this as sui generis, added that there is no legal basis to “heighten” the yardstick. The court aptly held “When a legislature, in its wisdom, decides to enact a legal framework, it is expected to and must be so presumed that it has undertaken a thorough analysis as regards the involvement of stakeholders – experts and non-experts, institutions, procedures, timelines for approval, intradepartmental appeals, inter-department appeals etc. A Court sitting in review does not have this machinery available before it and the Constitution never wanted it to do so.”

The Government, being an elected body, is the repository of public faith in matters of development and courts are not for venturing into their mind to adjudicate upon their priorities. The scope of review would depend upon the decision and the subject matter considering that traditionally review is with regards to the power to legislate on a subject matter. If existence of power is not in dispute, it would fall in the ambit of Article 13 enjoins the State to not violate any of the provisions of Part-III in a lawmaking function.