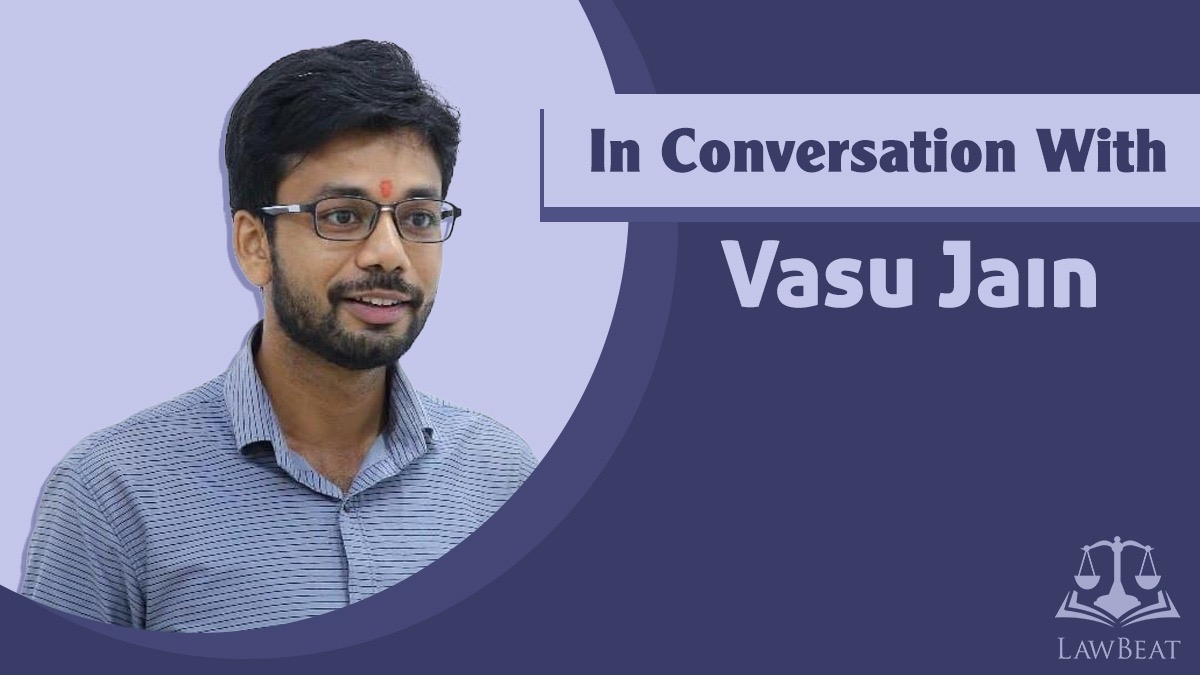 In this interview, Vasu Jain speaks his journey from choosing to study law to qualifying Civil Services Examination. He enlightens us about the strategy he employed for preparation, his advice to law students and civil service aspirants.

Vasu, who secured an All India Rank 67 was a student of Gujarat National Law University (GNLU), he cleared the competitive exam in his third attempt.

Vasu was among the top ten students of the University and was provided with a scholarship that entitled him to a waiver of his full tuition fee waiver. He has interned as a law clerk with Justice Navin Sinha, Judge, Supreme Court of India. He has won various moot court competitions, judgment writing competitions, and has published articles on a range of topics. On completion of his graduation, he worked at Pratham Institute for 6 months where he taught law. He left his teaching career behind to prepare for UPSC, he cleared the examination in the 3rd attempt by securing an All India Rank of 67.

Q. What did you choose first, UPSC or Law?  What was the decision behind your choice?

I first took a call that I would be pursuing law. I decided this while I was studying class XI, I was fascinated by it.  Two things made me choose law. If you see the leaders, whether, national or international leaders many of them are/were lawyers. Be it the national leaders during India's struggle for independence or the contemporary leaders, this really pushed and inspired me to choose law as a career. As an academic pedagogy law really shapes your personality as a leader. Secondly, each and every facet of life, be it technology or any other field is regulated by law. We have the IT (Information Technology) Act for technology, we have press guidelines for media, we have traffic rules for the road. So the law is omnipresent in each and every aspect of our life has a law.

Q. If you chose law first why did you follow it up with UPSC? Lawyers have many options to choose from, including that of judicial services

For a UPSC aspirant law is a very good option, it prepares you for the general studies and the law paper as you have studied law for five years. I was personally more inclined was more towards civil services as opposed to judicial services. This has more to do with the execution part. I had realized this thing in college where I headed various committees. I realized that taking charge of various teams,  responsibilities, getting the work done, and managing a team were things I was relatively better. So I decided not to pursue a career in a law firm or be a litigation lawyer because civil services provide very diverse opportunities to work, as an IAS officer you work in various areas, Secondly, the impact which a Civil Servant can create is huge, just to give an anecdote, I was the part of Legal Service Committee and we were trying to get a Pathshala (school) constructed in a nearby village, we tried for two months to get the construction started but the things didn’t move. We approached different authorities but to no avail, then one day an officer came to our University we informally asked him to take that matter up, things started moving within a week. This was when I realized that a civil servant has enough authority to change the lives of people in a positive way.

Q. Did you prepare for other competitive examinations as well?

Yes, I would say I have written more than 50 examinations. I wrote them all without any preparation whatsoever. I had strictly prepared only for the civil services. I wrote exams like State Public Service Commission,  SSC,  judicial examination and did well in all these exams. In Haryana State Service Commission I reached till interview and in UP and Rajasthan, I appeared for mains despite not preparing one bit. In a nutshell, I had written all the examinations but I prepared only for the UPSC examination.

Q. How did studying law help you in getting through UPSC, do you think law graduates have an edge while preparing for the services?

Law helps you in Civil Services Examinations not just in clearing the optional paper but also helps you in a way to approach a text. So, when we study law we are not just reading the bare text we are also trying to understand the intent, a very good example of this is Article 21 a single statement, that has been interpreted in many ways by many books. This understanding  I  developed as a law student helped me in understanding the depth of everything while I was preparing. Law has helped me in many ways, it helped with the preparation of the GS-II paper because I have studied law for 5 years so it saved my time while I prepared for other subjects.

Q. Being a law graduate, when did you start preparing for the examination, and what was your strategy?

Q. Have you worked with any law firm or practiced law before? Is it possible to prepare for competitive exams while working as a lawyer?

I have not worked in a law firm nor have I practiced as an advocate. I have only interned. I was working with Pratham for 6 months and trying to prepare but it was a difficult task since I had come home from  working8 hours or 9 hours shift and still stay motivated. One needs to have a different mindset to prepare for UPSC, first is to stay motivated, one should not feel complicit because you would be earning good money and despite this, you need to keep pushing yourself. Secondly, you need a supportive employer, at Pratham I met my Mentor Mr. Amandeep Rajgotra helped me prepare for this civil services examination he pushed me although he was my boss. I had to report him but he ensured that I get some time if not much so that I can prepare even during office hours.

Q. What message would you like to give to candidates who have recently passed Class XII and are willing to pursue law and to law graduates intending to pursue UPSC

Firstly make up your mind about what you want to do. Think about the entrance and the cut-off and prepare for the exam with as much focus as you prepared for CLAT. For students in Class XII,  firstly focus on the college you are entering into and don’t take it lightly. Better the college better the support system you have, a good college always provides you with a cushion. Not every aspirant clears UPSC, so it is important to have a backup plan.

A message to the future aspirants

If you have decided to appear for UPSC, Sacrifice, don’t be afraid of Sacrifice, you’ll have to sacrifice many things be it your Social life, be it e Social Media, dedicate yourself to prepare for the exam. Unless and until you are not dedicated you can’t clear the exam. I have been interacting with toppers and I have met quite a few of them, I have not seen a single person who said “Nahi yar aese hi hogaya,” people have their own stories about their dedication and sacrific. Don’t take it lightly, don’t delay your decision.  Eliminate this mindset where you think "karlenge", "this is the first attempt". There is no such thing as a "Preparatory Attempt”, "try ka kuch nahi hota bhai, if you are saying that ye to mera pehla attempt hai, try kar raha hu main, try ka matlab nahi hoga," take it seriously.