“All public buildings should be made accessible for the disabled within a year": Madras High Court warns of action against failure to ensure compliance 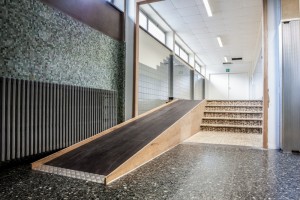 “Measures adopted by the State for making all public buildings accessible by persons with disabilities should be put in place within a year,” directed Madras High Court on Monday, stating that "failing compliance of the same within the prescribed date, the office-bearers in the appropriate department of the State may be proceeded against."

The Division Bench of Chief Justice Sanjib Banerjee and Justice P. D. Audikesavalu was hearing the matter filed by one M. Karpagam. The court highlighted that as per the State's status report the cut-off date for such compliance would be in accordance with the Rights of Persons with Disabilities Act, 2016 and the relevant date would be June 15, 2022.

In pursuance of the previous order of Jul 5, 2021, an access audit report was produced before the court on Monday, which indicated how special access measures have been provided at various public buildings across the state of Tamil Nadu.

On Jul 5 the court had directed the respondent officials to file a detailed report on the issue stating that “it is imperative that all public buildings, including Court houses, must have access that may be used by persons with disabilities”.

“Toilets must also be installed in public buildings which may be used by persons with disabilities”, court had added.

Asking the respondent officials to file a detailed status report on the issue, the court had reminded them that no new public buildings may be constructed or sanctioned or planned without providing access for persons with disabilities and ensuring toilets and other facilities for such persons.

The court had said that the official respondents, particularly the Public Works Department and its officials, should be acquainted with the governing statute and the national building code to ensure that the mandatory instructions therein are adhered to without any exception.

Therefore, in continuation of the same, on Monday, Sep 13, the court noted that several public buildings in the state have complied with the guidelines pertaining to such access.

The court took on record the submission made by the Government Pleader that guidelines and instructions had been issued by the state to ensure that within the next year all public buildings across the state, except heritage buildings, get appropriate equipment and construction installed that makes such buildings accessible to persons with disabilities.

Therefore, stating that in view of the state’s submission nothing further needs to be done on the petition, the court disposed of the plea without any order as to costs.