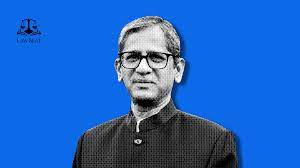 The Chief Justice of India on Saturday said that that there is a need to adapt to the practical realities of our society and localise our justice delivery systems.

CJI Ramana during his address at an event organised by the Karnataka State Bar Council to pay tributes to Late Mr. Justice Mohan M Shantanagouda said, "Very often our justice delivery poses multiple barriers for the common people. The working and the style of Courts do not sit well with the complexities of India."

Talking about the immense contribution of Justice Shantanagouda towards the judiciary CJI Ramana said, "His contribution to the jurisprudence of the nation, from the time of his elevation to the High Court and particularly during his time in the Supreme Court, is indisputable. His judgments provide a deep insight into his years of experience, his depth of knowledge and his unending wisdom."

"One thing which stood out about Brother Shantanagoudar was his sense of humor and his infectious laughter. In Court, when tempers could run high, he would magically make all the tension disappear with a ready pun. As the American poet Langston Hughes once said, “Like a welcome summer rain, humor may suddenly cleanse and cool the earth, the air and you.” " CJI Ramana added.

Further mentioning about the present scenario CJI Ramana said, "Courts need to be litigant centric, as they are the ultimate beneficiaries. The simplification of justice delivery should be our pressing concern. It is crucial to make justice delivery more transparent, accessible and effective."

Pressing upon the usage of the Alternate Dispute Resolution system, CJI Ramana said, "usage of alternate dispute mechanism such as mediation and conciliation would go a long way in reducing the friction between parties and would save resources. This also reduces the pendency and requirement for having lengthy arguments with lengthy judgment."

"Brother Shantanagoudar was one such extraordinary judge who understands that this is what our system requires," CJI Ramana added.