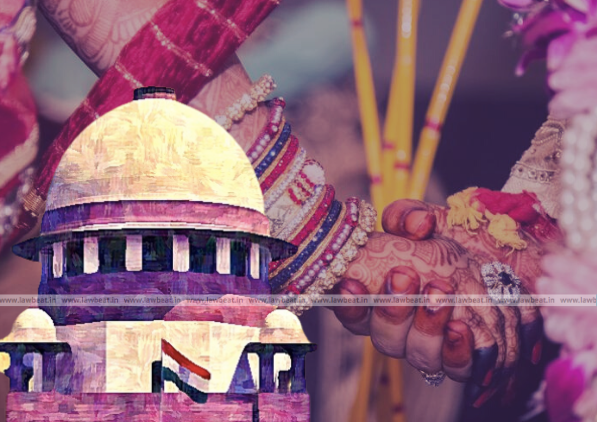 All India Muslim Personal Law Board (AIMPLB) has moved an Application for impleadment in the matter seeking Uniform Grounds of Maintenance and Alimony for all citizens, throughout the territory of India in the spirit of Articles 14, 15, 21 and 25 of the Constitution.

Opposing the said plea, the applicant has put forth grounds such as; self-adequacy of Muslim Law in dealing with matters of divorce, maintenance and alimony, Separation of Power which excludes the jurisdiction of Courts from intervening in legislative matters and practice against frivolous PILs.

The petitioner, Ashwini Kumar Upadhyay, has separately sought Uniform Grounds of Divorce, seeking Court intervention in matrimonial Muslim Personal Law, challenging Section 2 of the Muslim Personal Law (Shariat) Application Act, 1937, as unconstitutional and violative of Article 14, 15, 21 of the Constitution, insofar as it seeks to recognize and validate the practice of Polygamy and Nikah-Halala. The Board has also opposed the same.

The petition seeks to remove prevailing anomalies in the matters of maintenance and alimony in order to make them uniform for all citizens, in adherence to the mandate under Article 44 of the Constitution. Similar petitions have been moved earlier by the petitioner before the Delhi High Court seeking directions to constitute an Expert Committee/Judicial Commission to draft a Uniform Civil Code in the spirit of Article 44, considering the best practices of all religious sects, Civil laws of developed countries and International conventions.

Referring to Section 29 of the Hindu Marriage Act, 1955, the Applicant says, “The laws relating to marriage and divorce of Hindus themselves are not uniform and thus the customs and practices have been protected by the Statute itself by adding Section 29(2) of the Act.” Riju Prasad Sarma v. State of Assam, (2015) 9 SCC 461 has been relied in this regard.

It is further averred that multiple remedies under already existing provisions of law are available for an aggrieved Muslim woman, providing her the Right to choose the requisite or to avail simultaneous remedies, as per her choice and need, without placing any restriction of being bound by a single applicable law.

Furthermore, the applicant says that prayers made by the petitioner, if allowed, may violate the principle of Separation of Powers as it would lead the judiciary to direct the Legislature to make laws which is clearly against the Basic Structure as laid down in Kesavananda Bharti v. Union of India, (1973) 4 SCC 225.

“It is well settled that no writ of Mandamus lies towards the exigency, action or inaction of the legislature. The catena of judgments on the issue of, whether a writ of Mandamus can be issued directing the legislature to pass a law, was recently relied upon and reiterated by the Hon’ble Supreme Court of India, in State of HP v. Satpal Saini, (2017) 11 SCC 42; ‘The Courts do not frame policy or mandate that a particular policy should be followed. The duty to formulate policies is entrusted to the executive whose accountability is to the legislature and, through it, to the people.’”, the plea states.

Substantiating the submission that the present PIL is not maintainable, the applicant placed reliance on Dattaraj Nathuji Thaware v. State of Maharashtra, (2005) 1 SCC 590 and State of Uttaranchal v. Balwant Singh Chaufal, (2010) 3 SCC 402.

The limited prayer made by the applicant is; (i) Allow impleadment in the given writ petition (ii) Pass such other orders or directions as the Court may deem fit in the facts and circumstances of the present case.