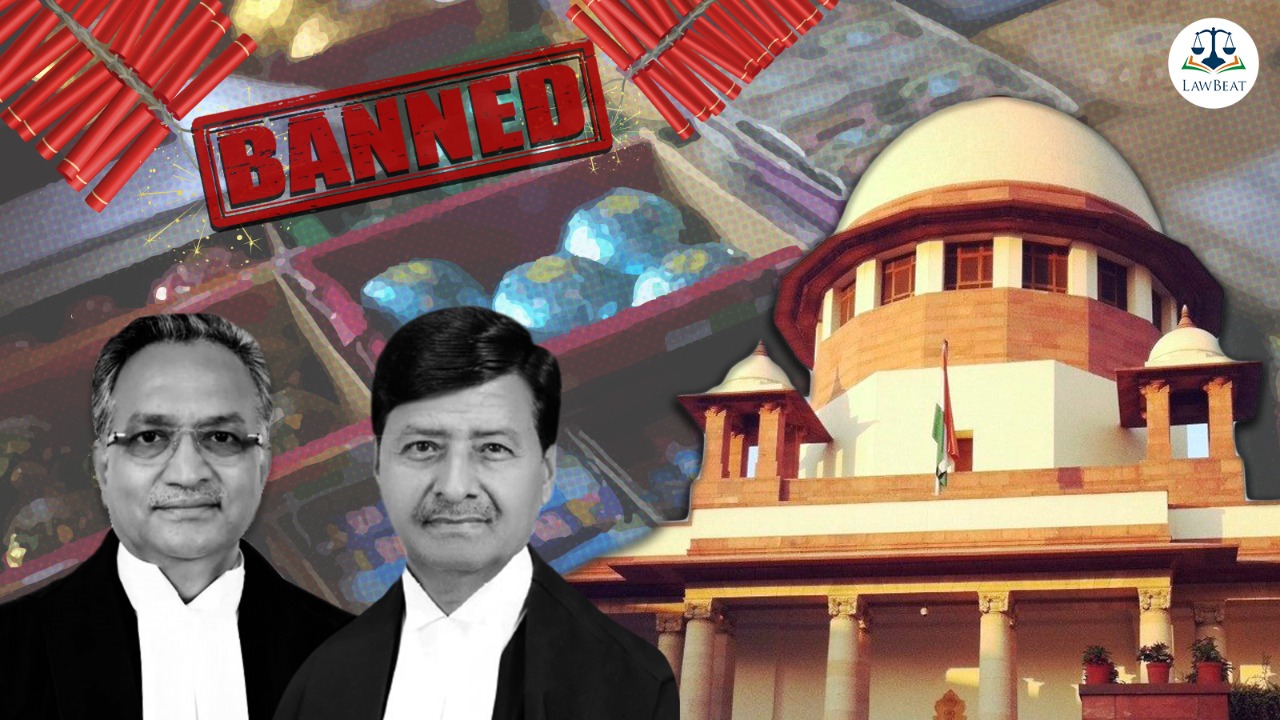 The Supreme Court on Monday has set aside the Calcutta High Court order imposing a blanket ban on the buying and selling of the firecrackers while allowing usage of Green Crackers while reiterating its order passed on October 29, 2021.

A vacation bench of Justice AM Khanwilkar and Justice Ajay Rastogi said, "if the Calcutta High Court wanted a complete ban on crackers, it would have called upon authorities to explain the practical difficulties viz. differentiating between green and other crackers”.

The bench while setting aside the order of the Calcutta High Court allowed the petitioners in the original petition to approach the High Court.

The petition has been filed by Chairman of an unregistered firecracker association Sara Bangla Atasbazi Unnayan Samity stating that the ban has been imposed despite the fact that the National Green Tribunal has already determined the issues pertaining to banning of fire crackers.

In addition to this, the association has already relied on the recent order of the Supreme Court in the case of Arjun Gopal and Others vs. Union of India & Others dated October 29, 2021 laying down norms as to the use and manufacture of green firecrackers in a controlled manner.

Senior Advocate Siddharth Bhatnagar appearing for the association referred to the previous orders of the National Geen Tribunal and the Supreme Court stating that the Calcutta High Court has passed this order putting up a complete ban despite these orders where the Green Crackers has not been banned.

Whereas, Justice Khanwilkar said, "Mr Bhatnagar we'll go by the last order, it was well published. It is not that it has not been published."

Senior Advocate Gopal Sankaranarayanan appearing for the applicant in the PIL pending before the Supreme Court submitted that there are many variables to the order, including Child Labour. We were shocked to learn that Dealers were selling harmful category crackers with green cracker stickers.

"PESO has cleared only 4 types of crackers. Right to health and Right to livelihood has been balanced well by Calcutta HC, the alternative will cause irreversible damage," Sankaranarayanan added.

Senior Advocate Anand Grover Says false certificate cases have been many in number viz. Violations of orders banning barium salt crackers. “West Bengal police has been active, but there is no enforcement difficulty. An unfounded apprehension has been put forth by Calcutta HC” Grover added.

Over the query of the bench regarding the identification of Green Crackers, Grover submitted that the police have an app to trace these false barcode certificates on the packaging of crackers while stating that the Calcutta HC order stating lack of enforcement on firecracker ban requires a blanket ban on all crackers.

Counsel appearing for the original applicant Advocate Rachit Lakhmani submitted that "No demarcated areas for bursting crackers in West Bengal. Why even green crackers can be allowed to be burnt? They can go in a hospital terrace and burst crackers."

On the issue of green crackers the Calcutta High Court had noted that:

"Keeping in mind the practical realities, we find that there is no mechanism in place to ascertain whether the crackers being sold/burst are only green crackers in compliance with the norms set in place by the relevant certifying body."

Whereas, the Association has contended that the High Court has "erroneously observed that it would be an impossible task for the police and/or law enforcement agencies to ascertain the veracity of the certificates of the crackers which are being used by the general public at the time of these festivals, irrespective of the classification under which they are sold."

In addition to this, the association has also submitted that the Supreme Court, "has also established the necessity of adopting a balanced approach and allowing the use of Green firecrackers that reduce emission by 25-30%."