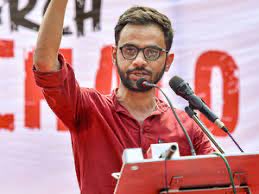 For Umar Khalid, who is facing court proceedings under the Unlawful Activities Prevention Act (UAPA) in connection with the Northeast Delhi riots, his counsel Adv. Trideep Pais has filed a fresh bail plea substituting the old one stating that there have been absolutely no changes made in the pleadings except replacing Section 439 CrPC with Section 437 CrPC.

The matter was being heard before Additional Sessions Judge Amitabh Rawat.

Adv. Pais told the court that the state has been supplied a copy of the new application, so he can continue the argument noting that he will not repeat what has been already submitted by him earlier.

Though the court said that it is a technical issue, if a fresh file has been filed then the State's reply needs to come on record before the arguments begin again.

Special Public Prosecutor Amit Prasad appearing for the state also argued that the accused person's attempt to file a fresh application is a dilatory tactic. However, Adv. Pais said that if the SPP wants this statement to come on record, he can do so, meanwhile he could continue his arguments.

Adv. Pais replied that he was not objecting to the fact that the state has to file its reply on the fresh application, but this should not come in the way of the arguments. He further said that the reply can be filed later as there are no significant changes made in the new plea.

However, the court held that to avoid any technical issue sabotaging the proceedings, the state's reply must come on record before the arguments can continue.

Therefore, the court has listed the matter to be next heard on Wednesday, Sep 8, and has also asked the state to file its reply before that.

It is to be noted here that in relation with the same FIR i.e. 59/2020  in connection with the Northeast Delhi riots, the State has earlier objected to the maintainability of the bail application of one of the co-accused, Ishrat Jahan, following which this new development has come in Khalid's matter.

However, counsel for Ishrat argued that the prosecution had not raised the question of maintainability in the last 6 months and raising an objection now, was unjustified for Ishrat Jahan who is languishing in jail.

In Umar's matter, on the last date of hearing, Adv. Pais had told the court that the chargesheet filed by the Delhi Police against Khalid did not read like a charge sheet but the script of “The Family Man” series.

’This reads like a 9 pm news channel story where they say whatever they want to say. Absolutely no responsibility”, Pais had remarked.

Also, against the allegation being raised that Khalid had preplanned everything to protest against the government, where the chargesheet reads “Previous brushes with law were clear in his mind,” Pais had remarked, "as if they knew what was in his mind. The last person to get into someone's mind was Voldemort from Harry Potter."

Pais had also submitted that there was not any evidence which suggested that Khalid, Yogender Yadav and Imam used social media for large scale indoctrination and mobilization of youths for Chakka Jaam as a protest against the Citizenship Amendment Act (CAA).

“Who is dividing the country on communal lines? It is the police. How can Islam and Masjid be negative words? The protestors against the CAA cannot be said to be against the country, the fact they were protesting against the CAA shows they want to live in this country,” Pais had alleged.

Pais had also submitted that 750 FIRs were registered in connection with the Delhi Riots but Khalid was not named in a single FIR. He had argued that the FIRs were unnecessarily filed against khalid and were targeted against persons important to the protest.

Pais had further pointed out before the court that the transcription of Umar Khalid’s speech in Amrawati broadcasted by News 18 and Republic World  which was relied as an evidence by Police against Khalid was retrieved from a tweet of a BJP member.

On September 13, 2020 Khalid was arrested in connection with communal clashes that broke out in northeast Delhi in February 2020, after violence between Citizenship (Amendment) Act supporters and its protesters became out of control leaving many people dead and several injured.

Khalid was granted bail in April in another case but has been languishing in Tihar Jail over conspiracy charges under UAPA.