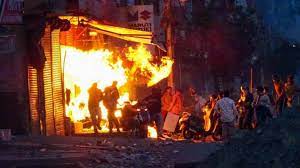 The Delhi High Court today extended till November 15 the time granted to Delhi Police to pay costs imposed by the Trial Court order for failing to register a separate FIR of one Mohd. Nasir who had received injuries in the North East Delhi riots and for alleged "casual, callous and farcical investigation of the case."

The single judge bench of Justice Subramonium Prasad passed the order after ASG SV Raju informed the court that Nasir had not filed his reply to the petition seeking extension of the interim relief granted by the court for depositing the cost.

The court on July 18 had sought response from Mohd Nasir on Delhi Police's plea.

The Trial Court while hearing a revision petition of the Delhi Police for failing to register a separate FIR of the complainant Mohammad Nasir, had observed that the Delhi police had failed to execute its statutory duties.

The court had further observed that "The mandate of the Delhi High Court Rules, referred to by the learned counsel for the respondent has not been followed by either the police or by learned Illaka MM in the matter, which clearly goes on to establish that the investigation even in case FIR No.64/2020, PS Bhajanpura has been done in a most casual, callous and farcical manner."

The Delhi Police in its appeal has submitted that the Trial Court had denied the Deputy Commissioner of Police (DCP) an opportunity of being heard before imposing costs which was against the principles of natural justice.

It has further been submitted that the imposition of cost by the Trial Court was uncalled for and would seriously affect not only the career of the government officials but would also certainly cause serious dent to the reputation of the officers.

The Delhi Police has alleged that the Trial Court had "made very serious remarks against the investigation even prior to the commencement of the trial which is contrary to the basic law that no finding should be given in the midst of trial. But in the present case, such adverse remarks have been made, which are bound to affect the fate of a case whose trial is still to commence and that too without calling for a report or explanation from the concerned IO."

The case relates to one Nasir who had received gunshot injury on his left eye by one Naresh Tyagi in the Delhi Riots last year after which he made a written complaint and specifically mentioned the name of the accused to SHO Bhajanpura. However no FIR was registered against them by the police.

A petition was also made before the Metropolitan Magistrate Court. However, in the meanwhile an FIR was registered where it was stated that Nasir along with 6 other persons in his locality had suffered gunshots injury.

The Delhi Police had argued that since an FIR had already been registered, another FIR was not required.