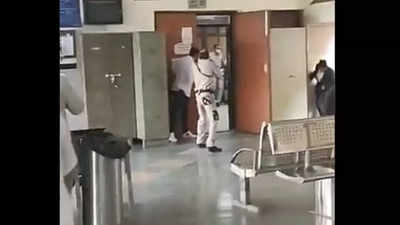 Notorious Delhi gangster Jitender Mann Gogi was shot dead by members of a rival gang inside a courtroom at the Rohini court in New Delhi earlier today, in a shootout that has left other several other lawyers and an intern injured.

In videos that emerged of the incident, rounds of gunshots are heard outside the courtroom and policemen and lawyers are seen scrambling for safety.

Preliminary reports suggest that gunmen dressed as lawyers barged into a court hearing and shot gangster Jitender Gogi thrice, with special force personnel escorting the gangster then firing back, killing both the attackers on the spot. 25-30 rounds of bullets have been said to be fired in the incident.

Jitender Gogi was allegedly involved in several criminal cases in connection with which he was imprisoned in Tihar since last year. He was declared dead upon arrival in the hospital.

“Two from rival gang opened fire at Jitender Gogi inside the court. That was when police retaliated and killed those two assailants - the police acted swiftly and killed both the assailants. Total three are dead, including Gogi,” Delhi Police Commissioner Rakesh Asthana reportedly told NDTV.