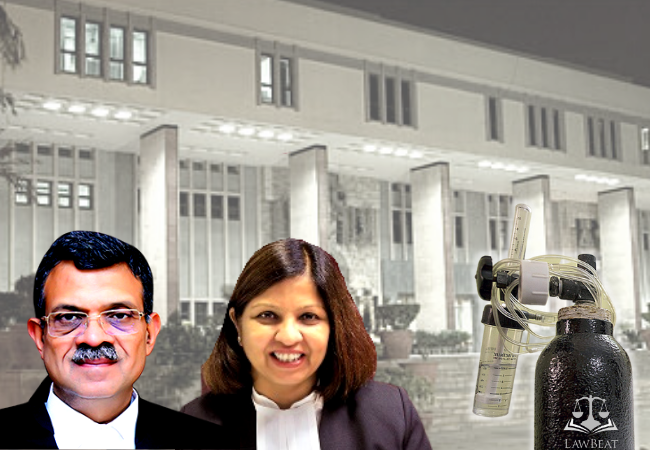 Delhi High Court continued hearing on the mismanagement of essential drugs and Oxygen shortage in the NCT of Delhi.

Earlier, Court had issued certain directions to the Kejriwal led Delhi Government to insure adequate oxygen supply and create a portal reflecting real time availability of essential drugs. GNCTD was also asked to file a report on all the deaths that have taken place in hospitals & nursing homes on account of oxygen shortage.

A Division Bench of Justice Vipin Sanghi and Justice Rekha Palli, while hearing the matter today, observed and directed the following,

“We therefore appeal the good sense of people to not resort to black marketing or hoarding of oxygen cylinders or medicines and make them available to the needy people. Hoarding of medicines or oxygen cylinder leads to creation of artificial scarcity to an extent which may not be fair. We hopefully expect that incidents of relatives of patients assaulting the doctors are not repeated. We further request the hospitals to not impose strain on the system which is already under stress”, added the bench.

Learned Solicitor General and ASG Sharma appeared for the Union;

Senior Advocate Maninder Singh appeared for Shanti Mukund Hospital and apprised the bench about oxygen shortage in the Hospital.

Advocate Malvika Trivedi informed the Bench that patients in home care are not able to arrange any oxygen and therefore GNCTD be directed to devise a mechanism for the same.

Senior Advocate Rajshekhar Rao has been appointed Amicus Curiae in the present matter.

Senior Advocate Rahul Mehra appeared for GNCTD; submitted two orders of April 27th and 28th passed by the Delhi Government with respect to the allocation of suppliers/re-fillers to distinct hospitals; “Yesterday they committed to supply 445 MT and today we have received 403 MT. They are under a contractual obligation to supply the oxygen now. They are under the Court's scanner now”, added the learned Senior Counsel.

Justice Sanghi to Dr SC Gupta: You have set up a very big hospital but even you didn’t make provisions for production of oxygen.

Advocate Alok Kumar (for Maharaja Agrasen Hospital) informed the Court that GNCTD has not taken into account the amount of oxygen allocated for emergency as well as for COVID hospitals.

Advocate Vineet Malhotra submitted that there can be a fixed price by which the individuals can procure oxygen from the re-fillers. Senior Advocate Tushar Rao suggested for increasing the work of Mohalla Clinic; “The clinics have a very wide network and they can assess if the patient requires hospital or not. Further, if possible these clinics can take care of the oxygen needs of these patients.”

Pertinent remarks and submissions made by Senior Advocate Krishnan Venugopal which the bench asked the Counsel for GNCTD to take a note of;

Justice Sanghi: The request of the doctors whose services are not required right now to be used for answering the queries of the patients is a very good idea. If Mr Mehra remembers, I had suggested the same last year also.

Advocate Vineet Malhotra submitted that there are people who don’t have a cylinder either, “The GNCTD will have to set up a price at which the individuals can procure oxygen.”

Justice Palli to Mr Goyal: Why are you not sending the complete 490MT of oxygen? People are dying, something needs to be done.

Justice Sanghi to Mr Goyal: Why has 490 MT allocated not yet reached Delhi?

Mr. Goyal, Additional Secretary, MHA: Due to shortage of tankers, we have not been able to create a daily cycle. There have been other issues with other supplies too.

Rahul Mehra for GNCTD interjected to submit; “… Yesterday in Supreme Court, Tamil Nadu Government raised a very valid issue related to supply of oxygen from an area which was 1000 km away and the Central Government had an immediate response. We have been saying this since a week. Why are they not providing us oxygen from Panipat?”

Justice Palli to Mr. Goyal, Additional Secretary, MHA: I don’t know why aren’t you doing this? You can do something on this aspect.

Justice Palli: Can you please tell me as to when did a tanker come from Durgapur?

ASG Sharma: Everything has been ironed out and from our side, everything is in place.

Ms. Sumita Dawra for DPIIT appeared at this juncture to submit the Government’s plan to bring containers from Hindon to Durgapur and Jamshedpur.

ASG Sharma also made a brief submission on cap over oxygen cylinders and to prosecute the defaulters.

The bench also acknowledged the issue of hoarding of cylinders, availability of re-fillers and further made oral directions to restrict black marketing;

“390 MT has been supplied to Delhi but 100MT has been allocated from other places due to the national picture at large. I want the amicus to set up a precedent on the same.”

On Justice Sanghi posing the question on availability and supply of oxygen, Learned SG assured to make detailed submissions tomorrow.

Justice Sanghi: All your officials are saying that there is availability of oxygen but why is it not coming? People are really troubled.

SGI: I will explain the reasons tomorrow.

Advocate Ankur Mahindroo highlighted the issue of RT PCR tests and the time taken therein. Suggestions were also made of Door-to-Door testing.

Justice Sanghi: You can raise these issues to the ICMR. We cannot pass this in our orders.

Ankur Mahindroo: This process of certification can be automated. There is a need to ramp up testing in some manners.

Justice Sanghi: A lot of people want to set up the labs but ICMR is taking time to grant them certification. Setting up these labs costs almost 1 crore. Why would they not want to conduct tests?

Justice Sanghi: Testing has gone down because they cannot handle the rising number of cases.

Advocate Mahindroo: The same has to be ramped up.

On making the essential drugs available through Apps;

Justice Sanghi: We had asked Prof. Sanjay Dhir to appear from IIT Delhi and Prof. Iqbal Hassan too.

Prof Hassan: We have developed the software and also created ID PW’s for the users so that they can give details of the number of medicines and other necessary details.

Justice Sanghi: Mr Dhir, you were involved for development of CoWIN App. Please have a look at the app developed by Prof Hassan (NIC) and suggest to make the same robust and user friendly.