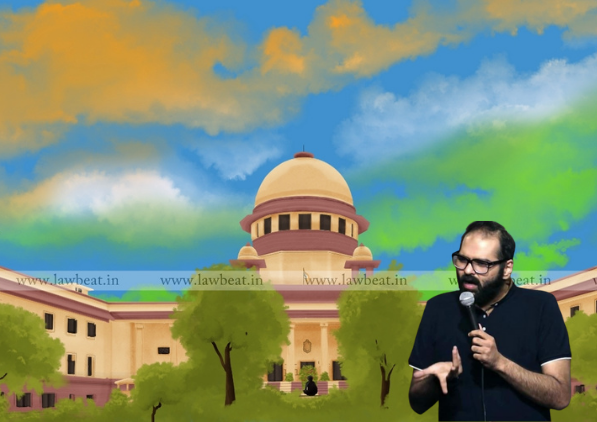 The Supreme Court on Monday granted time to the Petitioner(s), in order to file rejoinder to Kunal Kamra's affidavit concerning contempt of court for his tweets against the Supreme Court of India.

The Top Court’s bench comprising Justice Ashok Bhushan, Justice R. Subhash Reddy and Justice M.R. Shah took up the matter today and adjourned it by 4 weeks, granting the petitioner time to respond to the affidavit filed on behalf of Kamra.

Kunal Kamra, who is facing a contempt of court case, told the Supreme Court in his affidavit that the language and style he resorts to are not intending to insult but to draw the attention to and prompt an engagement with issues that he believes are relevant to our democracy and which have also been raised in the public domain by more severe and learned commentators.

On 18th December 2020 issued a notice to Kunal Kamra and Taneja. The same was issued for the petition filed by Shrirang Katneshwarkar, Nitika Duhan (both law students), and three lawyers, Amey Abhay Sirsikar, Abhishek Sharad Raskar, and Satyendra Vinayak Muley seeking criminal contempt action against him for his derogatory tweets against the Judiciary under the Contempt of Courts Act,1972 and Article 129 of The Constitution of India,1950.

The following were the four tweets :

2 .The pace at which the Supreme Court operates in matters of “National Interests” it’s time we replace Mahatma Gandhi’s photo with Harish Salve’s photo...

3. DY Chandrachud is a flight attendant serving champagne to first class passengers after they’re fast tracked through, while commoners don’t know if they’ll ever be boarded or seated, let alone served.

4. All lawyers with a spine must stop the use of the prefix “Hon’ble” while referring to the Supreme Court or its judges. Honour has left the building long back...

Along with the tweets, Kamra posted a morphed saffron-colored image of the Supreme Court building with a BJP flag hoisted in the Court's foyer.

The petitioners approached the (AG) KK Venugopal on 11th November 2020 under Rule 3(c) of The Rules To Regulate The Proceedings For Contempt Of Court,1975 for his consent for filing contempt petition against Kamra. The AG, while granting his consent in writing concerning the petition, said that “Under the Constitution, the freedom of speech is subject to the law of contempt and I believe that it is time that people understand that attacking the Supreme Court of India unjustifiably and brazenly will attract punishment under the Contempt of Courts Act, 1972.”

Responding to the proceedings, Kamra said that the suggestion his tweets could shake the foundations of the most powerful court in the world is an overestimation of his abilities. The intention of publishing his tweets was not to diminish the people's faith in the highest court of our democracy.

The affidavit stated that “Jokes are based on a comedian’s perception, which they use to make the audience share that perception laugh. These jokes are not reality and don’t claim to be so. Most people do not react to jokes that don’t make them laugh; they ignore them like our political leaders ignore their critics. That is where the life of a joke must end. The truth about the attention economy is that the more attention one gives to criticism or ridicule, the more credible it appears.

Through my work, I attempt to abide by the comedy’s tenet of comforting the afflicted and afflicting the comfortable. For instance, take the joke, ‘Behind every successful Indian businessman, there is a nationalized bank.’ The humor attempts to blunt the grimness of the situation and offers a measure of comfort to the afflicted, including the families of citizens who find themselves unable to withdraw their hard-earned money from their bank accounts. Jokes like these at best make the comfortable squirm in their plush chair, even as they sit securely in the knowledge that a joke cannot make the heavens fall.”

Kamra concluded with the following words:

“Lastly, I may disagree with many decisions by many courts in many matters, but I promise this Bench that I will respect any decision that comes my way with a broad smile. I will not vilify this Bench or the Supreme Court in the matter specifically because that would be contempt of court.”