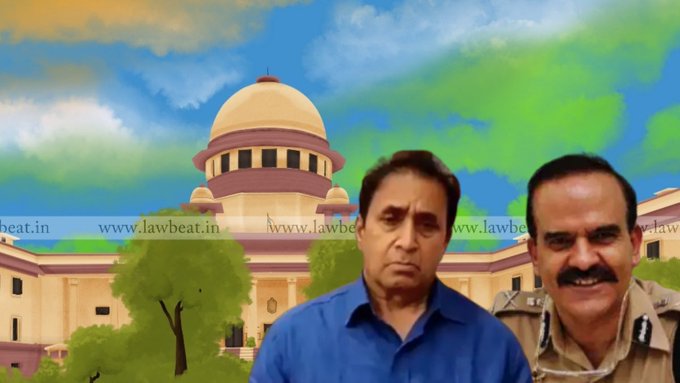 “Keeping into consideration the nature of allegations & persona involved, an investigation by an independent agency is required. We are not inclined to interfere.”, Justice SK Kaul ordered.

The hearing saw the appearance of Senior Counsel(s) Mr Kapil Sibal for Maharashtra Home Minister Anil Deshmukh & Mr Abhishekh Manu Singhvi for the State of Maharashtra. The central issue around which today's hearing pertained was whether an accused had the right to be heard.

Sibal in his first submission while remarking on the case in hand to be  a mockery of the entire political process submitted that the Home Minister was not given a chance to be heard & to present his side of story & was impleaded in the matter without serving a notice. To further substantiate his argument Sibal submitted that, “There are no supporting documents, no supporting statements. The talk never happens between the Home Minister & commissioner. All of this is based on hearsay evidence. There was only circulation of letters.”

At this Juncture Justice SK Kaul intervened and remarked: It's not a case of political rivalry. It involves top most official & the commissioner working under him. This is a different case. Mr Sibal, let the investigation continue. We'll see what happens. The matter involves serious allegations.

Reference by Mr Sibal was made to various Apex Court judgements to substantiate his contention that CBI had no power to adjudicate on the matter without giving the accused a chance to be heard.

Mr Abhishekh Manu Singhvi appearing for State of Maharashtra submitted that the plea was disposed of without giving a chance to the Maharashtra Govt to file anything on merits.

“Your Lordships should have allowed us to file a counter because we have much to say.Since the matter had to go to CBI, then the Bench did not consider the 156(3) provision.”, Singhvi further submitted.

Justice Kaul: Every time the commissioner & Home Minister who are on the same page suddenly fall apart. That's when the problem came in. It's all about convenience. The matters in the allegations involved are very serious & the persona involved are the Home Minister & Commissioner who were working closely together till they fell apart.

The Court had also agreed that the allegations were serious and warranted an independent probe.

"We agree with Nankani and Jha that it is an unprecedented case before the court... Deshmukh is Home Minister who leads the police... There has to be an independent enquiry... But CBI need not register FIR immediately or take up Patil's complaint", the Court had said.