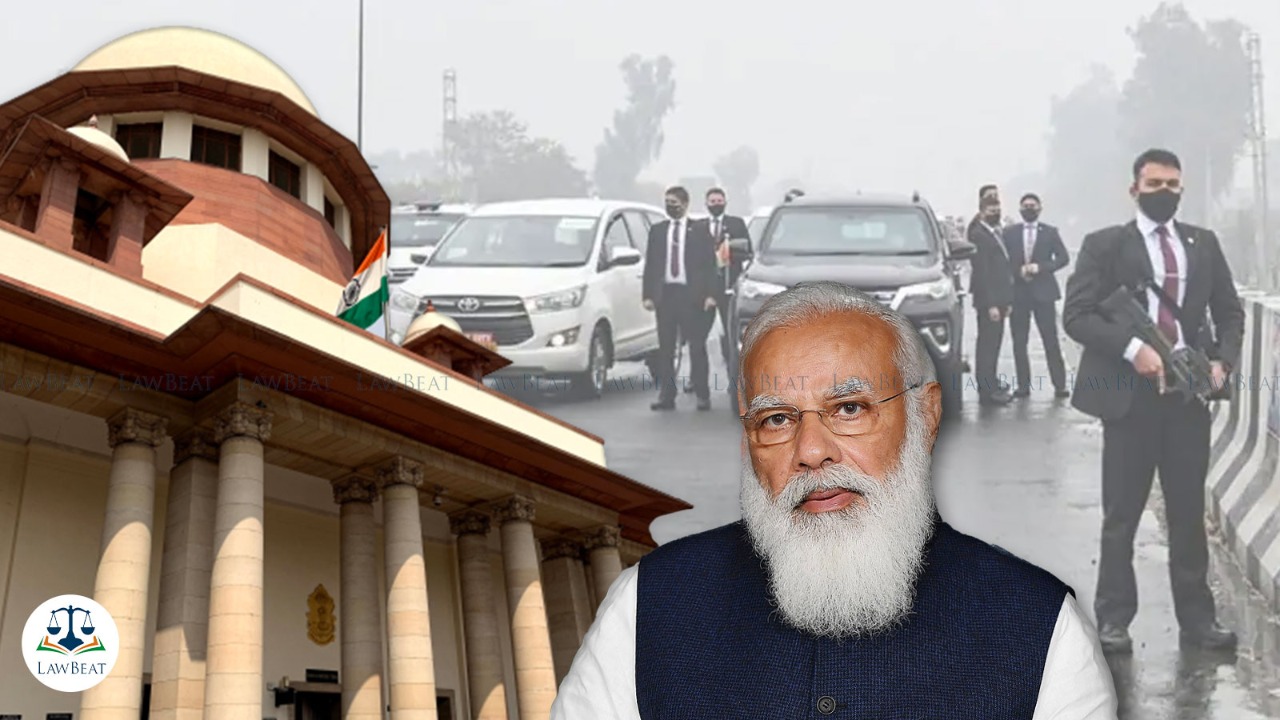 The Supreme Court on Monday stated that it will be constituting a committee to look over the recent security breach against the Prime Minister's convoy on his way to Punjab.

A bench of CJI NV Ramana, Justices Surya Kant & Hima Kohli said that the Committee shall be headed by a former Supreme Court Judge and shall consist of Director General of Police, Chandigarh, Registrar General (Punjab and Haryana High Court) and an NIA official [Order to be uploaded]

Today, the Solicitor General of India (SGI), Tushar Mehta informed Court that various provisions of the Special Protection Group Act and the "Blue Book" had been marred with the Security breach of the Prime Minister's convoy last week.

He pointed this out when the Advocate General of Punjab said that the Centre's committee, constituted for looking into the probe had issued show cause notices to 7 officers including the Director General of Police as well as the Chief Secretary of Punjab, even though a hearing on the subject matter was underway in Court.

"I have no hope in this committee and I see no hope in fairness," Advocate General Patwalia said.

SGI however informed Court that the show cause notices were issue prior to the hearing and that even so, the same were for non-compliance of the statutory provisions. It was then that the SGI took the Court over the SPG Act and the Blue Book's details.

"Proximate security means protection by close quarter by all means of transport. The SPG is to remain around the protectee. There is a book called the Blue Book elaborating the microscopic steps for protection including for PM. Whenever there is an assembly, the maintenance of public order is paramount even if there is crowd during PM’s visit. Please note crowd started gathering in the morning & no intel came from the DG, others who were responsible," SGI told Court.

The Solicitor General then went on to tell Court that there was "Complete Intelligence Failure" at behest of the State Police.

"There was no intel to the SPG about the threat perception. There are safe houses for such a perception. In fact the Blue book says the state police down to the local police gets activated. Here no intel received till crowd was 100 meters away! COMPLETE INTELLIGENCE FAILURE."
- SGI To Supreme Court

On the issue of "fair hearing", SGI said that the purpose of the Show Cause notice had nothing to do with a hearing but with the failure of the officers in solemn duties.

"This was not an unplanned visit & though the original plan was PM will travel by air, the weather commanded otherwise & it was communicated immediately! In fact a rehearsal was done as is done in view of protocol. SPG was told by DG - 'Route is clear!!'"
- SGI To Court

On January 7, Top Court had asked the committees constituted by the State of Punjab and the Centre looking into the recent security breach of the Prime Minister's convoy heading to Punjab to hold operations till today.

The Court had directed the Registrar General of the High Court of Punjab to secure all documents related to the Prime Minister's visit to Punjab in the issue concerning the recent security breach of his convoy.

Court also directed Central and State agencies to provide necessary details and provide the Registrar General with all necessary cooperation.

"Taking into consideration the documents advanced by the parties, for the time being, in lieu of the issue relating to the Hon'ble PM of the country, as a first step, we deem it appropriate to direct the Registrar General of HC of Punjab and Haryana to secure documents related to the Prime Minister's visit to Punjab. We direct the State of Punjab, including the SPG and other central and state agencies to cooperate and provide the necessary details and we direct the Registrar General to keep these documents safe."

The plea has stated that "as per reliable reports in the print and the electronic media, and as per the Press Information Bureau report of Central Government, was clearly intentional and raises a serious question as to national security and the role played by the present political dispensation in the State of Punjab."

It further stated that the, "situation wherein a high constitutional functionary is stranded on a flyover is an extremely high security threat considering the vulnerability and the degree of planning and protection required for the office of the Prime Minister."

It is alleged that the Chief Secretary, State of Punjab and Director General of Police had given assurances to Special Protection Group, that the route is clear, and it was found that the same was not true resulting in a precarious situation.

The plea has further alleged, "what was shocking and alarming on many levels was that local Police personnel on the spot were seen to be participating with the hooligans who jeopardised the security of the Prime Minister."

The plea has sought suspension of the Chief Secretary to the Government of Punjab Anirudh Tiwari and Director General of Police Sidharth Chattopadyaya while directing the Central Government to conduct an departmental action against same.