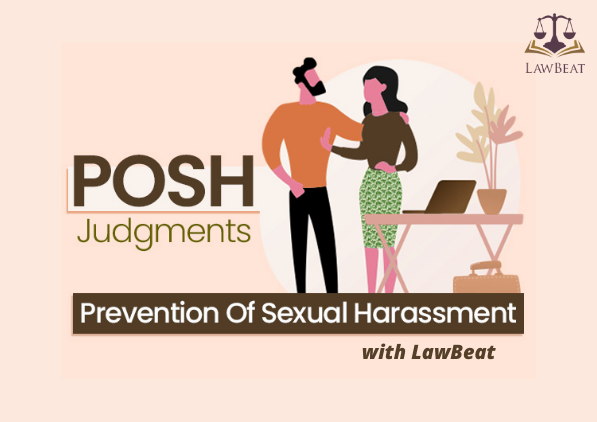 The Delhi High Court has held that the Full Court as a Disciplinary Authority is not bound by the report of an internal complaints committee (IC).

The Court has held that for persons belonging to judicial services of a State in the High Court, the right to appeal under section 18 of the Sexual Harassment of Women at Workplace Act, 2013 is required to be read in terms of Article 235 of the Constitution of India.

A division bench of Justices Rajiv Sahai Endlaw & Asha Menon has observed that the right of appeal against an Inquiry report by the Full Court, in terms of the Delhi Higher Judicial Services Rules of an Inquiring Authority does not exist in terms of the stipulated provision of the POSH Act under sections 11 & 18.

The Court has noted that though under the Sexual Harassment Act, on receiving the report of the ICC, of the allegations having been proved, the Disciplinary Authority is bound to take action for sexual harassment as a misconduct but the Full Court, as a Disciplinary Authority, in the light of Article 235, cannot be said to be so bound.

"The Full Court as the Disciplinary Authority, under Rules 8 & 9 of the AIS Rules also, after receipt of report of the Inquiring Authority, was only required to give opportunity to the petitioner to represent there against and to, after considering the said representation, impose penalty and which has also been done in the present case"
- Delhi High Court

The Court has specifically observed that till date, no adequate and appropriate amendments were carried out in service rules, even though directions had been issued in by the Apex Court, so far as deeming a report of the disciplinary committee as an inquiry report of the ICC were concerned.

The petitioner-judge contended that a complaint of sexual harassment was filed [On July 5, 2016] against him as a counter-blast to a notice of transfer which was served upon the previous Ahalmad, Ms. M, following which she also filed a complaint with the Court [On July 11, 2016]. Following this, the petitioner was placed under suspension [On July 13, 2016], pending disciplinary proceedings. However, the grounds of suspension were not intimated and the complaints aforesaid were not brought to his notice, he stated.

The registrar general of the Court also directed the local police for registration of criminal case against him. An internal complaints committee (IC) was also formulated to look into the allegations raised against him in terms of section 4 of the Sexual Harassment of Women at Workplace (Prevention, Prohibition & Redressal) Act, 2013 [POSH Act] on July 19, 2016.

Petitioner approached the Supreme Court, challenging the entire process held that it was open to the petitioner to raise all plea's of facts before appropriate authority and that the Inquiry report put forth in terms of the Disciplinary proceedings under Service Rules [dated March 9, 2018] was appealable in terms of the POSH Act under section 18 (stipulating the provision of appeal).

Petitioner then made a representation to the Court (respondent in this case), stating that as the Supreme Court had held that the report in terms of the Disciplinary proceedings dated March 9, 2018 was an inquiry report under the POSH Act, the said report was only required to see whether the allegations of sexual harassment against the petitioner were proved or not and that the penalty emanating therefrom (of dismissal from service), ceased to exist.

The petitioner also contended that there disciplinary proceedings initiated against him were bad in law as the IC had already submitted a report earlier, finding that there were no proven allegations of sexual harassment against him.

He averred that this arbitrary selection of wrong procedure had denied him petitioner equality before law and equal protection of law.

The respondent, the full court in this case took a stand since the petitioner had all along participated in the inquiry process, he was now estopped from challenging it at a belated stage. A full fledged inquiry was conducted and the Respondent formulated an IC to inquire into the allegations, thereby dismissing petitioner from his service.

Further to this, the respondent contended that the the right of appeal to an aggrieved person is available only when report is submitted under Section 13 of the Sexual Harassment Act to the employer.

1. On the point of whether the allegations against the petitioner were proven under the Act by the report dated March 9, 2018, the Court found that there was no flaw whatsoever in the report and a conclusion was rightly drawn on the basis of material on record. Thus the dismissal of the petitioner was upheld.

2. On the question of whether the Inquiring Authority under the AIS Rules read into the DHJS Rules and the IC under the POSH Act are separate entities, the Court found that they are one and the same.

3. On the question of whether the petitioner had a right to appeal against the Inquiry report of the Disciplinary Authority, Court found that a Full Court as a Disciplinary Authority, would remain entitled to give an opportunity to the judicial officer to make a represention against the finding but the right of appeal did not stand the test of law in terms of the POSH Act. For this purpose, Court relied upon Dinesh Chandra Mishra Vs. India Council of Agriculture Research 2019 SCC OnLine Del 8891 which held that that the inquiry so conducted by the in terms of the services rules was not appealable in terms of the POSH Act.