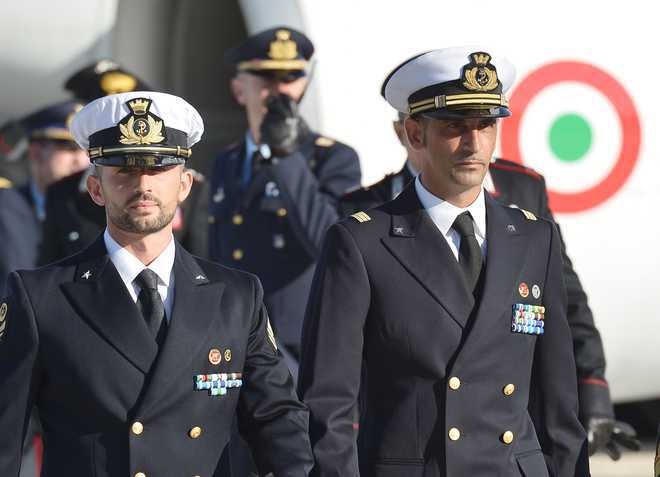 The Supreme Court today while hinting to transfer the amount of Rs 10 crore received as compensation by Republic of Italy in the italian Marines case to the High Court of Kerala has reserved the matter for orders to be passed on Tuesday.

Vacation bench of Justice MR Shah and Justice Indira Banerjee expressed their concerns with respect to the manner in which the compensation amount was to be invested amongst the legal heirs of the deceased victim(s).

“4 crore is a very big amount. We need to protect the interest of the victims. There may be inter-family disputes too. We may close these proceedings & transfer the amount to HC & the HC would pass appropriate orders.”, the Court observed.

The Court also directed Senior Advocate Sohail Dutt appearing for the Republic of Italy to continue the criminal proceedings against the italian marines, Massimilano Latorre and Salvatore Girone.

Solicitor General Tushar Mehta appearing for the Union of India informed the Court about the Union depositing the amount of compensation with the Supreme Court Registry as per the Court’s order dated April 9, 2021.

SGI Tushar Mehta while apprising the Court about the agreement entered between the Government of India, Republic of Italy and State of Kerala to give compensation of Rs 10 crore proposed to be given by way of 4 crore each to the families of the victims and 2 crore to the boat owner’s family submitted that the was yet to be approportioned.

Solicitor General Mehta also submitted that some payment was made when the incident took place but the Kerala Government was still insisting on providing some amount of compensation to the ones who did not receive any injury but were on board at the time of incident.

Senior Advocate Sohail Dutt appearing for the Republic of Italy requested for passing an order with respect to quashing of the case registered by the Ministry of External Affairs against the italian marines after disposal of the matter in terms of war.

To this SGI Tushar Mehta while referring to the terms of the award passed by the Tribunal wherein the Marines were entitled to immunity and only Italy could proceed with criminally prosecuting the Marines requested the court to pass an order on the aspect of criminal jurisdiction too.

“The dispute before the tribunal was whether India or Italy have the jurisdiction of prosecuting the marines. The court said that India could not prosecute criminally & only Italy could. So the SC will have to pass an order with regards to the same. Both India and Kerala govt have accepted the same.”, SGI Mehta said.

It was on February 15, 2012 that a fishing boat ‘St. Antony’ was mistaken for a pirate boat by the Italian mariners. Consequently two Indian fishermen, Valentine Jalastine and Ajesh Binki were shot dead.

In its judgment dated July 2, 2020, Permanent Court of Arbitration had allowed India to seek compensation from Italian Mariners. It was, inter-alia, observed, “that as a result of the breach by Italy of Article 87, paragraph 1, subparagraph (a), and Article 90 of the Convention, India is entitled to payment of compensation in connection with loss of life, physical harm, material damage to property (including to the “St. Antony”) and moral harm suffered by the captain and other crew members of the “St. Antony”, which by its nature cannot be made good through restitution”

The court thereafter, while directing the Republic of Italy to continue the criminal proceedings against the Italian Marines, reserved the matter final orders on June 15, 2021.