Right To Hold Property Not An Absolute Right Under Article 300A Of Constitution: Kerala High Court 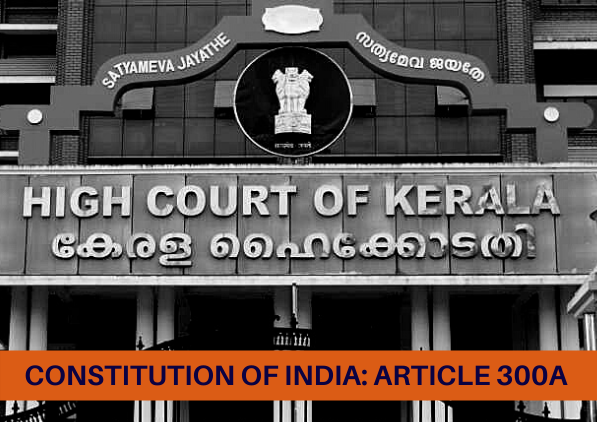 The Kerala High Court has held that the Right To Hold property in terms of Article 300-A of the Constitution is not an absolute right, with the State being competent to take away the said right with the authority of law.

While dismissing the present petition on lack of merits, Justice N.Nagaresh held, “Since the Act 4 of 2010 has been brought into force following due process of law and by the authority of law, the petitioners cannot be heard to contend that the right guaranteed to them under Article 300- A of the Constitution of India is violated. The right to hold property given under Article 300-A is not absolute and the State is competent to take away the said rights with the authority of law.”

Petitioners 1 to 4 (incorporated companies) along with the 5th petitioner claim to hold 70.81% of equity shares in M/s. Kerala Spinners Limited, a Private Sector Company promoted by Birlas and was engaged in the manufacture and sale of textile yarn in its factory at Komalapuram in Alappuzha District.

The Company applied for closure under Section 25(O) of the Industrial Disputes Act, 1947, which was later referred to the Board for Industrial and Financial Reconstruction (hereinafter called “BIFR”). Pending consideration of rehabilitation of the Company, the BIFR appointed Indian Overseas Bank as the Operating Agency invoking Section 17 (1) of the Sick Industrial Companies (Special Provisions) Act, 1985 (SICA).

While the issue of revival of the Company was pending, State of Kerala (Respondent 1) promulgated Ordinance dated 19.11.2009, later replaced by the Kerala Spinners Limited, Alappuzha (Acquisition and Transfer of Undertaking) Act 4 of 2010.

By the impugned Act 4 of 2010, right of the ownership of the petitioners in respect of the Company was acquired by the Government and got transferred to the Kerala State Textiles Corporation Limited.

With respect to Issue 1, Court placed reliance on Entry 42 (Acquisition and requisitioning of property) in List III and Entry 18 in List II which empowers the State to enact the legislation in question.

Court referred to the facts of the present case to answer Issue 2. Kerala Spinners Limited was referred to the BIFR and the BIFR appointed Indian Overseas Bank as Operating Agency. It is undisputed that no revival programme could be materialised by the Operating Agency, following which, Government of Kerala expressed its interest to takeover the concerned unit. Directions to the Government to file an appropriate proposal with the Operating Agency for Change of Management were issued. It was thereafter that the Ordinance No.24/2009 was promulgated and later the Act 4 of 2010 was enacted. Therefore, it has to be assumed that the acquisition of the Company by the State of Kerala was known to the BIFR. Conclusively Court said, “Pendency of the statutory proceedings before a statutory authority cannot ordinarily be a bar for any legislature to exercise its legislative functions. This Court finds no illegality in enacting the Act 4 of 2010 during the pendency of proceedings before BIFR.”

Clarifying Issue 4, Court resorted to the defined mechanism as provided under the Act 4 of 2010, for grant of compensation. It said, “Under Section 16 of the Act 4 of 2010, the State Government has to appoint a Commissioner for the purpose of disbursing amounts payable to the owner of the sick textile undertaking. Section 18 of the Act contemplates claims to be made to the Commissioner appointed under Section 16. There are provisions for examination, admission or rejection of the claims. The Act 4 of 2010 also provides that a claimant who is dissatisfied with the decision of the Commissioner may prefer an appeal against the decision to the principal civil court of original jurisdiction within the local limits of whose jurisdiction the sick textile undertaking is situated.” Conclusively it was said that since the Act in question has a specified procedure for allowing compensation and also designates appellate authority of the same, no deviation can be sustained.

Answering Issue 5 in affirmation, Court held, “…right to hold property given under Article 300-A is not absolute and the State is competent to take away the said rights with the authority of law.”

Petition was therefore dismissed on lack of merits.