[Rohingya Deportation] No Rohingya detained in Jammu to be deported without following due procedure: Supreme Court 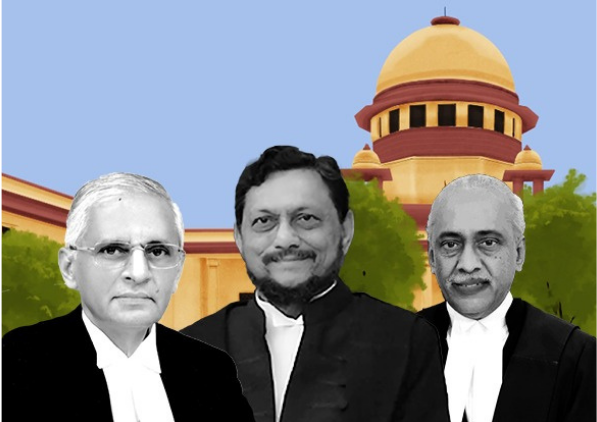 Supreme Court led Bench of Chief Justice SA Bobde, Justice AS Bopanna & Justice V Ramasubramanian delivers its orders in the plea seeking release of Rohingya Refugees who have been arbitrarily detained in Jammu Region as well as for staying their threatened deportation to Myanmar on the grounds of Article 21.

The Bench said, “Rohingyas in Jammu shall not be deported unless the procedure for deportation is followed. Interlocutory application disposed off.”

In the earlier hearing, Sr Adv Prashant Bhushan appeared on behalf of the petitioner, Sr Adv Mr Harish Salve on behalf of State of Jammu & Kashmir & SG Tushar Mehta on behalf of Union of India to makde their respective submissions.

Adv Prashant Bhushan on behalf of the petitioners placed reliance on the landmark judgement by the International Court of Justice (“ICJ”) dated January 23,2020 titled as Gambia v. Myanmar to highlight the ethnic atrocities suffered by the Rohingya Community in Myanmar. In this judgement, the ICJ found that, Rohingya community in Myanmar  had suffered genocide & ordered the government of Myanmar to restrain their military forces from continuing with the opperssion of the Rohingyas.

In the light of this judgement issued unanimously by a 15 member Bench of the ICJ on a petition bought before it by the State of Gambia against the State of Myanmar, Bhushan submitted that Rohingyas were ethnic minorities in Myanmar & that they were subject to genocide & various forms of ethnic atrocities.

At this juncture SG Tushar interneved & remarked: Mr Bhushan wants to read that there is some problem in Myanmar. The problem is what should we do about them in our country.

Bhushan also informed the Bench that because of the Military Coup in Myanmar which began on 1st February,2021, the general situation of human rights in Myanmar worsened which further led to many more refugees from other communities also fleeing Myanmar.

While emphasizing on the fact that India along with Panama & Canada was the force behind the adoption of the Genocide Convention on December 9,1948 Bhushan further submitted that India had an obligation to prevent genocide.

SG Tushar Mehta representing Union of India submitted that the Govt would not deport the refugees from Myanmar until and unless the government receives confirmation that the refugees are citizens of that Country.

Bhushan: Will the order of the govt that has been overtaken by Coup be valid? The UN has said that Myanmar Govt is illegal.

Bench: Are you saying that we should deny them any credibility because they are an illegal govt?

Bhushan: Yes.The party which was responsible for severe assault of their right is only the govt now. These people were all rendered stateless.

Sr Adv Harish Salve on behalf of the State of Jammu & Kashmir while strongly opposing the hearing of UN Special Rapporteur & the contentions of Sr Adv Prashant Bhushan submitted that the it was a basic principle of International Law that the Bench while exercising its power of Judicial Review could not direct the government to either recognise or derecognise the govt. He further submitted that the State of Jammu & Kashmir was acting as per the powers delegated to it by the Union while it made detention centres in Jammu & Kashmir.

Salve’s next submission was that the judgement of Gambia v. Myanmar referred to by Mr Bhushan was only a provisional measure, “to protect against further, irreparable harm to the rights of Rohingya group under the Genocide Convention”.

“Their judgments operate in the realm of Public International Law. Municipal laws apply in domestic Court. There are reasons as to why we have not signed Treaties.”, Salve further contended.

“The proposed deportation of members of Rohingya community who have fled persecution and have taken refuge in India, back to Myanmar, would not only violate their article 21 rights and all international norms but would almost be like sending them to torture or death”, the application stated.

Thus the Bench while disallowing the UN Special Rapporteur reserved the orders in the matter.

“There is a serious objection for you to be heard. We will not hear you today. We do not want your assistance today. We will close the case for order.”, CJI remarked.