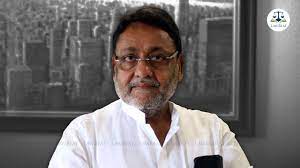 Special Judge RN Rokade, while taking cognizance stated that there are sufficient grounds for proceeding further with the case and issued notice to Malik and the other accused in the complaint.

“Malik in connivance with D­-company members hatched a criminal conspiracy for usurping the prime property belonging to Mrs. Munira Plumber (complainant). Therefore, the above property usurped by the accused (Malik) in connivance with Hasina Parkar and others (D-company), is proceeds of crime under PMLA. The said acquisition of the proceeds of crime is generated from illegal activities. There is prima facie evidence to indicate that the accused is directly and knowingly involved in a money laundering offense, therefore, he is responsible for committing the offense of money laundering and is liable for punishment,” stated the order.

The underworld crime syndicate headed by Dawood Ibrahim is informally known as D-company.

It is alleged that accused Nawab Malik and members of D­-company criminally conspired and took unauthorized possession/acquisition of the aforesaid property.

“The statements in the charge sheet that Sardar Khan, a convict in Bombay blast case of 1993, was also part of the said conspiracy leading to the usurping of the property,” noted court.

The prosecution complaint filed by ED stated that members of D-company and Malik connived together and executed several legal documents to put a facade of genuinity over the criminal act. Malik and Hasina Parkar entered into a criminal conspiracy and Nawab Malik agreed to pay Rs.55 lakhs to  Hasina Parkar, Rs.15 lakhs to Salim Patel, and Rs.5 lakhs to Sardar Khan.

Malik was arrested on February 23, 2022, by ED under section 19 of the Prevention of Money Laundering Act, 2002 (PMLA) on allegations that he had purchased a property at a rate lower than the market value from Dawood Ibrahim.

It was alleged that Malik in connivance with D-company members i.e. Haseena Parker, Salim Patel, and Sardar Khan hatched a criminal conspiracy for usurping a prime property in Mumbai, lawfully belonging to one Munira Plumber and her mother, having the market value of around Rs.300 crores. The same has been held by the special court to be proceeds of crime as defined under section 2(1) (u) of PMLA.

Earlier, the Bombay High Court had refused the interim release of Malik and dismissed the petition and the same was upheld by the Supreme Court on April 22, 2022, Malik was directed to approach the Special Court for bail.