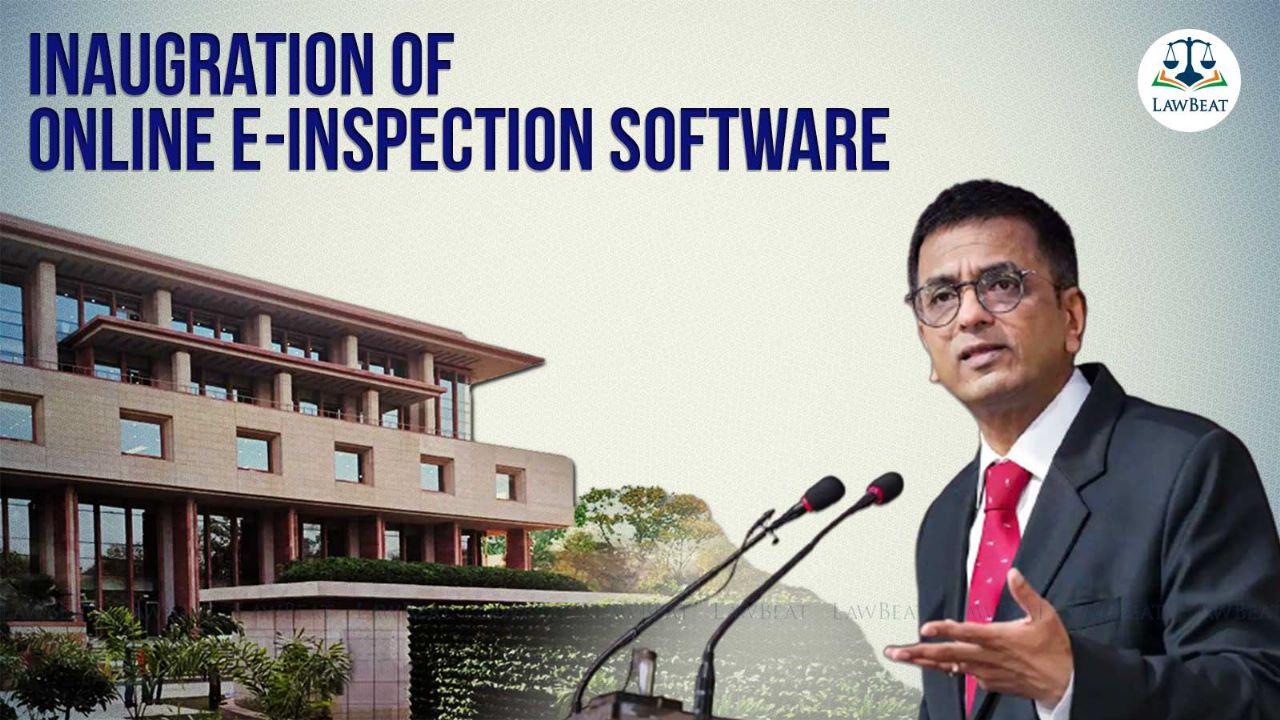 Inspections can now be conducted from any location, saving time and reducing unnecessary burden, said CJI DY Chandrachud while addressing the inauguration ceremony of the e-inspection software.

The Chief Justice of India Justice DY Chandrachud on Tuesday praised the Delhi High Court for being at the forefront of digitization and said that 'online e-Inspection software is a step in the right direction of a sustainable transformation of our Justice delivery system'.

The CJI while addressing the inauguration ceremony of the Delhi High Court’s online e-inspection software said,

CJI said that the Delhi High Court is way ahead of the Supreme Court in the facilities which are provided, not just to the Judges, but to lawyers and litigants as well.

Talking about neutral citation being introduced in the High Court recently, CJI said that many other High Courts have appointed it, and even the Supreme Court is at the anvil of adopting it.

In a lighter vein, Chandrachud said that the great danger of replicating the Delhi High Court is that the Supreme Court might be accused of “intellectual piracy”.

“So, I thought to obviate this criticism that, you know, we are pirating on what has been done by dynamic judges of the Delhi High Court. I can borrow the ‘intellectual capital’ of the Delhi High Court into the Supreme Court. So then I've constituted this committee called the Monitoring and Implementation Committee, as part of the e-Committee of the Supreme Court to shoulder part of my burden in the e-committee, consisting of Justice Rajiv Shakhder. We have Justice Raja Vijayaraghavan from the Kerala High Court, Justice Suraj Govindaraj from the Karnataka High Court and Justice Anoop Chitkara from Punjab and Haryana High Court because I thought that we must pass on the baton to the younger generation and create administrative skills, the capacity for learning the capacity for understanding India beyond the confines of our high courts”, he said.

Praising the young Judges, CJI Chandrachud said that "the need of the hour is for us to open up to new ideas and the ideas coming from the younger judges of the High Courts are just mindboggling. The kind of input, I get from them across India is a cause for great optimism for the future of the Indian Judiciary".

The judiciary has an “unenviable task” of delivering justice in a period of both challenges and groundbreaking opportunities. The IT revolution constitutes a resource that has changed the way we work together and envisages the Justice delivery mechanism, CJI added.

Applauding the Delhi High Court’s initiatives like e-filling, web links dedicated to mentioning of urgent matters, digitized case records, and video conferencing CJI said that they have enhanced the robustness of a sustainable future court system.

“Technology has become a powerful tool in the legal system, improving efficiency, accessibility, and accuracy in the administration of justice. However, the success of any initiative and innovation, whether in law or technology, depends on the ability to collaborate with stakeholders and incorporate critical feedback of those who will be using it,” CJI Chandrachud said.

Further, he said that the Supreme Court recently organized a “Pilot Hackathon” to explore practical propositions for bringing efficiency in the existing process from filing to the listing of judicial matters and in the process facilitating the participatory design. “The next step is for the Supreme Court to organize Hackathon 2.0, which would be open for everyone to participate,” he added.

CJI said, “Earlier, young members of the Bar had to wait for hours at a stretch to inspect files and have access to the court records….this newly inaugurated software allows for an instant electronic review of the court documents making the process more efficient and convenient....inspection can now happen from any location saving time and reducing unnecessary burden on Ahlmad’s and officer-in-charge of record room”.

Acknowledging the online inspection software CJI said that the next step would be taking this initiative forward and implementing it in all the High Courts, the Supreme Court, and most critically the District Courts.

“The district judiciary plays a crucial role in ensuring access to justice for citizens at the grassroots level. E-inspection of judicial records at the district level would reduce our dependence on physical document handling and would allow us to move beyond the constraints of space. It is essential to ensure that such online services are compatible with most used browsers, screen-reading software that can be operated with ease on mobiles or devices with low bandwidth, and most importantly they do not contribute to the digital divide,” the CJI said.

“We must ensure that the Principle of procedural and substantive fairness, due process, transparency, and equal access are made integral to the process of adoption of new technologies”, he added.

Concluding his speech, CJI congratulated each member of the IT Committee and court officers who developed the software and in a lighter vein said, “I would only request the Delhi High Court to please continue to do what you are doing, you are being watched and followed as well”.