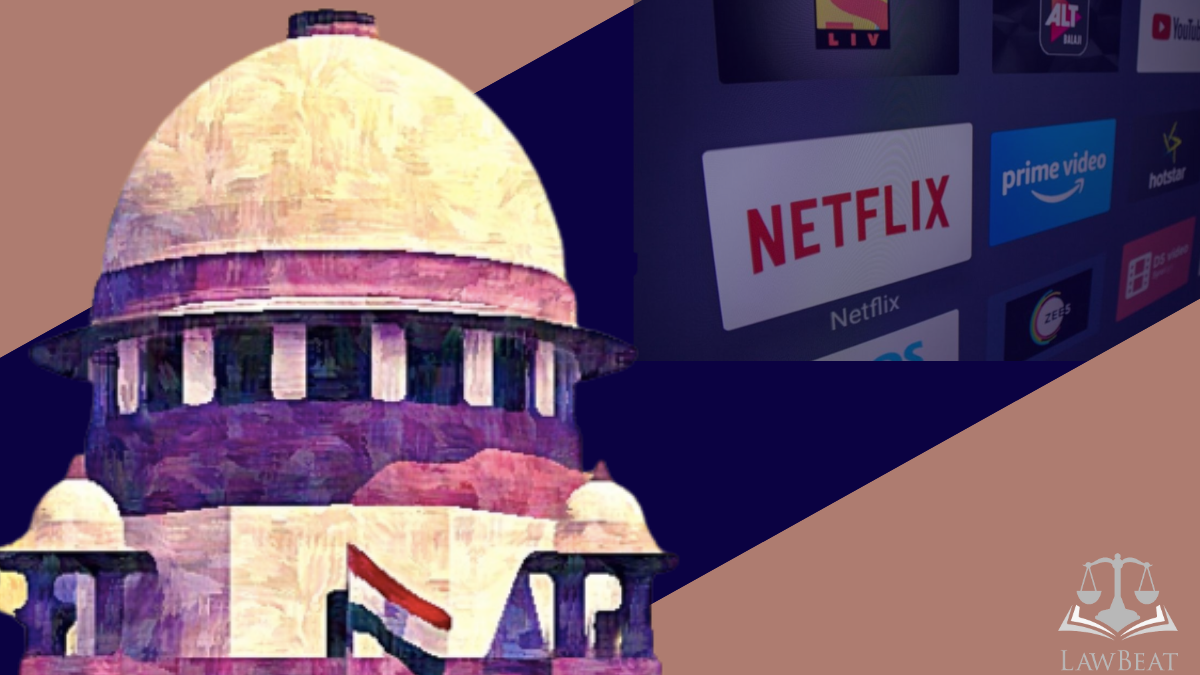 The Supreme Court has recently issued notice in a petition by the Centre seeking transfer of  transfer of cases pending across High Courts for regulation of Over The Top(OTT) platforms like Netflix, Prime Video, Disney Hotstar etc.

It is pertinent to note that on February 9, On February 9, a bench of Justices S Abdul Nazeer and Sanjiv Khanna issued notice to the respondents on a plea seeking guidelines to regulate the hitherto unregulated, uncertified, pornographic, sexually explicit, vulgar, profane and legally restricted contents broadcasted on the online platforms including (but not limited to) Netflix, Amazon Prime etc., or in the alternative; seeking a writ/order/direction to the respondents to frame legal provisions/guidelines for the same, and; to remove such contents.

The Petitioner is a NGO (Justice for Rights Foundation) with one of its objectives ‘To work for Protecting Human Rights and Fundamental Rights’ has taken up this issue affecting people at large.

The main contentions of the petitioner as raised in the petition revolves around setting up a regulating body, licencing, censorship and availability of pre-screening remedy.

“the said online platforms are broadcasting content which is self-generated and also stream third party content in form of Internet/Web-series, movies, videos, episodes etc. and the said streaming is not regulated; thereby giving them a virtual license to stream web-series, movies, videos and episodes without any certification by any certifying authority, not regulated by law and devoid of any guidelines by the Courts.”- noted the petition.

The petition further states that the RTI dated 23.08.2018 filed in Ministry of Information and Broadcasting seeking information about the name and details of the Licensing authority and also the Act(s), Laws, Bye-Laws, Rules and Standing Orders which govern and regulate the content on online web streaming platforms and to which the reply (15.09.2018) by Respondent had stated that “intermediaries are regulated under the IT Act, 2000 and the Rules made thereunder. Section 79 of the IT Act puts onus on the intermediaries to observe due diligence while discharging their duties under the Act and observe guidelines as prescribed by the Central Government”.

To the above reply the petitioner contends, “That section 79 of the IT Act does not apply to all the online platforms in the present case as a blanket provision as the platforms stream third party content and also give self-generated content.”

The petioner also stated that, “even if an online platform exercise self-regulation, it still has to comply with established legal procedure and provisions of relevant laws in order to broadcast content on its streaming platform.”

The petitioner prayed for the following reliefs in his petition,

3. Direct the respondents to pass necessary directions to all online platforms to remove legally restricted contents with immediate effect, and;

4. Pass such other and further orders as this Hon’ble Court may deem fit and proper in the facts and circumstances of this case.”

The Delhi HC had dismissed the present petition saying that OTT regulation was a legislative exercise and therefore the petitioner filed a Special Leave Petition in the SC.

The Supreme Court on 9th February 2021 consisting of division bench of Justices S Abdul Nazeer and Sanjiv Khanna issued notice and listed the matter to be heard on 23rd march 2021 along with one transfer petition (UNION OF INDIA & ANR. v. SUDESH KUMAR SINGH & ORS., 2021)

According to a new amendment in the Government of India (Allocation of Business) Rules, 1961 these OTT platforms along with content on current affairs and digital news will all be regulated by the Ministry of Information and Broadcasting.

No official statements regarding any guidelines have been made public, but it can be assumed that the Programme and Advertising Codes under the Cable and Television Rules of 1994 will be providing for the regulatory framework for content available on these platforms. There also exists the Electronic Media Monitoring Center which monitors the content available on televisions.

In 2020, the United Kingdom Government has issued legislation enforcing the EU Electronic Communications Code (EECC) standards in the UK. Under the Brexit transitional framework, the UK is required to adopt the EECC. The approach of the Government was foreshadowed by its statement published in July on the UK implementation and the draught Legislative Implementation (SI).

In Singapore the content regulation on OTT platforms are quite direct as the regulatory body for media, Infocomm Media Development Authority (IMDA), in 2018 issued a code which regulated the OTT platforms. According to these guidelines, the OTT platform will have to rate the content available on their platform the same way offline movies are rated. This code has specific instructions for content that are available for viewers above 16 and 21. In cases of content to be made available for viewers above 16 years, the platform has to make sure parental lock function has been provided for by them and in cases of content made available only for viewers above 21 should have a proper procedure in place to unlock such content after age verification, which is otherwise at all other times locked

A few other countries that have put up regulations on the OTT platforms directly or have other laws to regulate them are: (i) Australia (ii) Turkey (iii) Indonesia (iv) Kenya and (v) Saudi Arabia.