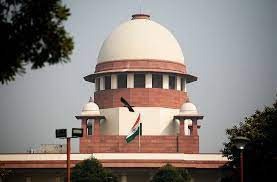 The Supreme Court on Monday refused to entertain a plea seeking deployment of Central Reserve Police Forces for conducting the Kolkata Municipal Corporation elections over the allegation of Bharatiya Janata Party (BJP) members being beaten up and being coerced to withdraw their candidature.

A bench L Nageswara Rao and Justice BR Gavai asked BJP to approach the High Court stating that if the Court starts entertaining these petitions under Article 32, "there would be no end to it."

Senior Advocate Maninder Singh appearing for the petitioners submitted that the BJP candidates were threatened, yet, no FIR has been registered.

It was alleged that 4 BJP leaders including Paramita Dutta, Purnima Chakraborty, Dityata Kaur, and Chandan Das were beaten up and the police refused to register their complaint.

It was submitted that in view of the post-poll violence, it is high time when the Central forces need to be deployed.

Earlier, Senior Advocate Menaka Guruswamy appearing for the petitioner(s) BJP members had mentioned the matter before CJI NV Ramana while stating that the state functionary must produce a comprehensive plan for the municipal elections. Guruswamy further informed the Court that a similar matter is pending before a bench led by Justice DY Chandrachud.

It further added, "The candidates have been receiving threats from Trinamool Congress (TMC) goons which have been identified by the candidates. Candidates are scared for their life and are being pressurised to withdraw their nomination."

The plea has been filed through AOR Aditya Sharma.