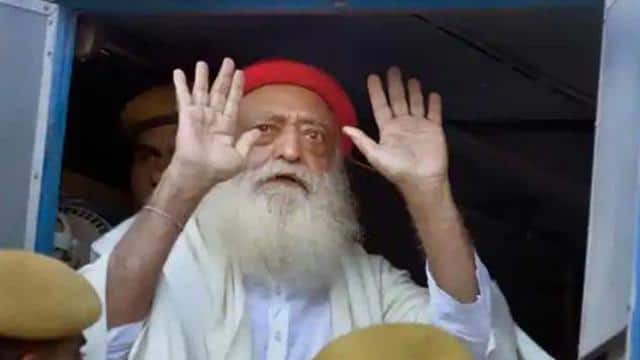 The Supreme Court has sought State of Rajasthan’s response in a plea filed by self styled Godman Asharam Bapu seeking temporary suspension of sentence to pursue medical treatment.

Bench of Justice BR Gavai and Justice Krishna Murari has issued notice to find out whether Asharam Bapu can be shifted to Ayurvedic Prakash Deep Institute of Medical Sciences a centre of his choice for treatment of his medical ailments.

Senior Advocate Siddharth Luthra appearing for Asharam Bapu apprised the bench that he was seeking an interim bail and submitted that the petitioner aged 84 was suffering from serious medical ailments.

“I request the court to give him the centre of his choice where he can get treatment. The MD Hospital gave him blood thinners.At this age, he might have medical complications.”, Senior Advocate Luthra further submitted.

The High Court of Judicature for Rajasthan at Jodhpur comprising bench of Justice Sandeep Mehta and Justice Devendra Kachhawaha on May 21 had dismissed the “Criminal misc. Suspension of Sentences Application (Appeal)”, filed on behalf of the Applicant (Asharam Bapu).

The Court observed that, “Suspending the sentences awarded to the appellant, in this case, would be nothing short of an exercise in futility because immediately on his release from the Central Jail, Jodhpur, he would be required to be taken to the State of Gujarat in connection with the case pending trial as a production warrant certainly would be in force".

The prayer of the appellant regarding setting up of the medical facility at his Ashram was also not tenable and the High Court had further stated “because this Court is cognizant of the fact that whenever, the convict has been taken out from prison even for attending the dates of hearing during trial, his followers would to form huge congregations which would create law and order situations and presently, the risk of spread of COVID infections would become imminent”.

While dismissing the application, the High Court had further directed the district and jail administration to ensure providing proper treatment to Ashram at the suitable medical hospital.

“It shall also be ensured that no sooner, the convict is lodged back at Jail after recovery, he will be provided proper treatment, nutritious diet and safe environment looking to his old age and medical condition.”, the High Court had also said.

Asharam Bapu was sentenced for life for raping a 16-year-old girl in Jodhpur. He was charged under Sections 342 (punishment for wrongful confinement), 376 (rape), 354A (assault or criminal force to woman with intent to outrage her modesty), 506 (punishment for criminal intimidation) and 509/34 (word, gesture or act intended to insult the modesty of a woman read with Section 36 – acts done by several persons in furtherance of common intention) of the IPC, as well as under relevant sections of the Protection of Children from Sexual Offences (POSCO) Act and Sections 23 and 26 of the Juvenile Justice Act.