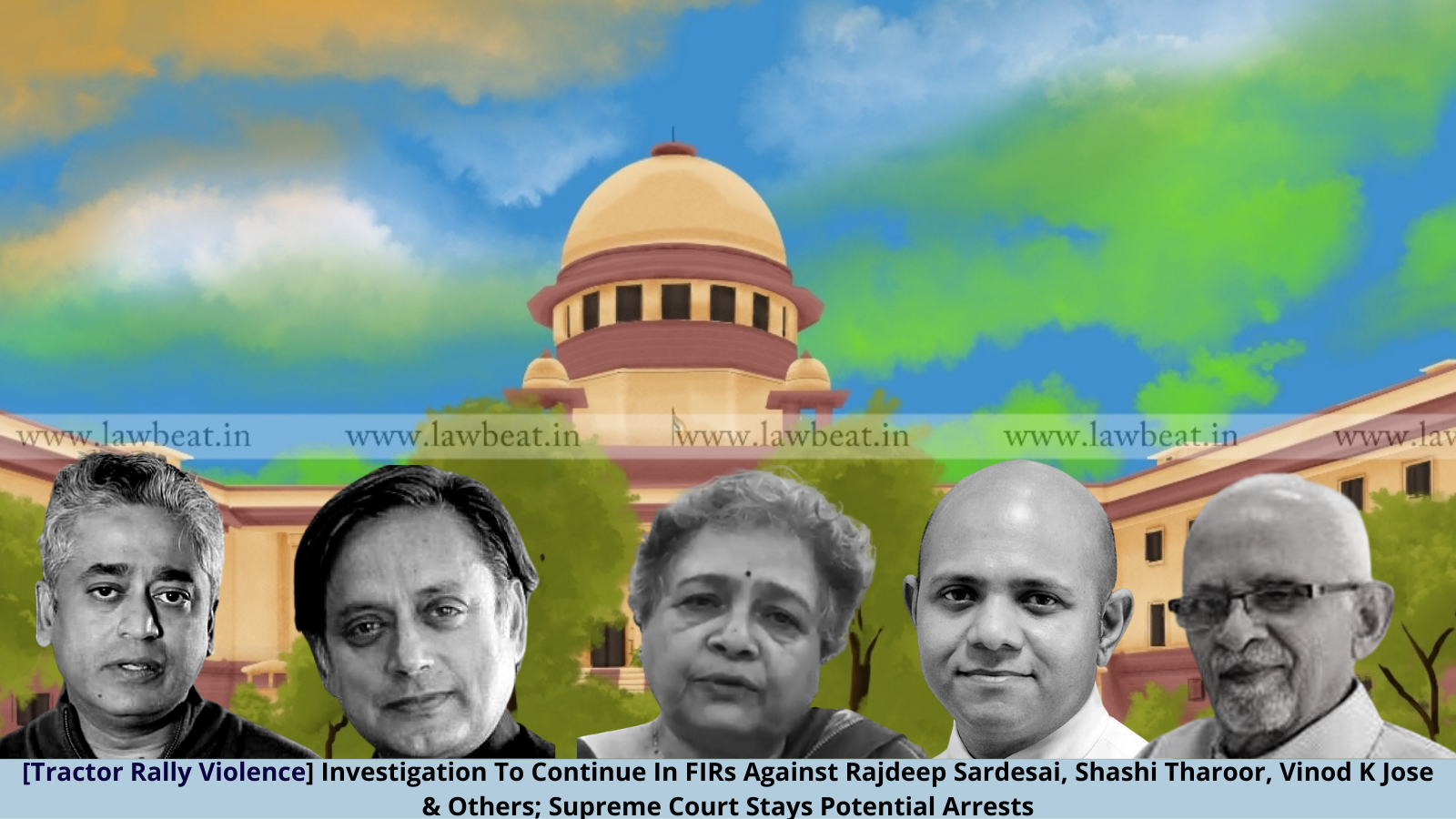 A bench of Chief Justice SA Bobde, Justices AS Bopanna & V. Ramasubramaniun issued notice in plea(s) seeking quashing of FIR's against the aforementioned and stayed their potential arrests till the next date of hearing.

"There are legal precedents that which cover this issue, we are will issue notice," said Chief Justice of India SA Bobde when the case(s) were called on for hearing.

Senior Advocate Mukul Rohatgi appearing for Vinod K. Jose submitted that there was no ground made out in the said FIR against his client. "They had written a report which they later changed, where is the question of hurting religious sentiments?," he stated.

Solicitor General Tushar Mehta on the other hand informed the bench that there the magnitude of effect that such tweets entailed were horrendous.

At this juncture, bench stated that the Top Court will stay their potential arrests and the case(s) will be taken up after two weeks.

Congress leader Shashi Tharoor and various journalists including India Today's Rajdeep Sardesai and The Caravan's Vinod K Jose had approached the Supreme Court seeking quashing of the FIRs registered against them for allegedly "misreporting" and "spreading disharmony" on the ongoing farmers' protests.

The petitioners have termed the FIRs as frivolous, urging that they ought to be cancelled.

An FIR was filed against the petitioners by the Gurugram police last week following a complaint by one Pankaj Singh. Another FIR was filed on the same matter in Noida by Arpit Mishra.

Arpit Mishra, the complainant had lodged an FIR at PS Gautam Buddh Nagar under sections 153(A) [Promoting enmity between different groups on grounds of religion, race, place of birth, residence, language, etc., and doing acts prejudicial to maintenance of harmony], 153(B) [Imputations, assertions prejudicial to national-integration], 295(A) Deliberate and malicious acts, intended to outrage reli­gious feelings of any class by insulting its religion or reli­gious beliefs, 298 [Uttering, words, etc., with deliberate intent to wound the religious feelings of any person] IPC and other relevant provisions against the aforementioned persons.

The contents of the FIR read that the named persons on January 26, falsely and with an intention to instigate people to riot, reported on their platforms as well as on social media handles, including from twitter that a farmer had been killed by the Delhi Police.

"This was done intentionally and with bad faith so that riots would get triggered on a large scale," the FIR reads.

Further, the contents read that the acts done by the persons were carried out in order to create rifts and tensions between various segments of the society and to cause religious disturbances.

"The accused indulged in incitement for purposes of instigating riots for their personal and political gains and the misinformation was spread intentionally and with a motive to trigger rioting." the complainant avers.

It has been further stated, inter alia, that the aforementioned persons indulged in these alleged acts so that the image of India gets destroyed and a tense atmosphere is created, also painting the image of Delhi police in a negative light.