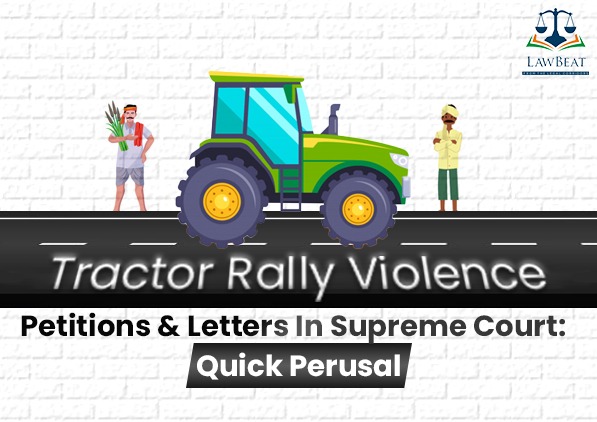 With the farmers protests turning violent on Republic day, the Supreme Court saw a barrage of petitions and letters addressed to the Chief Justice of India. The following have been corroborated for easy perusal:

An advocate has moved to the Apex Court of India seeking constitution of a Judicial Commission for Inquiry into the violent incidents which took place on 26th January, 2021 in the capital city of India during the protesting farmers Tractor March.

The Petitioner, Advocate Vishal Tiwari is a practising Advocate in Supreme Court and in his petition, he narrates the incidents that led to the violence and vandalism.

"The farmers decided to lead a protest Tractor March in Delhi on 26th January 2021 and for this every arrangements by the police Administration and farmer unions were made. However, the Tractor March took a violent turn leaving injuries and destruction of public property. The Internet services were interrupted as government ordered the operators to suspend the same. Hence, the normal public life disrupted as in the times of pandemic when social distancing is the need of the hour, most people are relying on the internet services for the smooth running of their work"

In this context, he has stated that the matter is serious because when the protest was going on peacefully for since last two months than suddenly how it turned into violent movement and led violence on 26th January.

The petitioner further states that there may be some Conspiracy involved here too which led to disturbance and damaged the peaceful protest by some notorious forces or organizations, "so that a clash between police and protesting farmers take place and results into chaos".
He has stated thus,

“The Question for consideration in National Security and public Interest arises that who is Responsible for creating the Disturbance and how and who turned the peaceful farmer protest into violent movement or How and who created the circumstances which let the protest turn violent".

A law student, Ashish Rai from Mumbai University wrote to the CJI on the morning January 27, a day after the capital saw violence and vandalism on India's 72nd Republic day.

Rai states in his letter,

"Through this letter, I would like to make a humble request to the Hon'ble supreme court that the tractor rally was organised by a group of farmers on the 26th of January 2021. The event has been terrorised by some anti-social elements in which a large number of public property of the country has been damaged and due to tampering with the country's heritage Red Fort."
- Rai states in his letter

In this context, Rai has sought formulation of a Special Investigation Committee to be formed for conduct of a rigorous inquiry against those involved in the activity.

Advocate ML Sharma has filed a petition stating that the Centre along with certain news channels such as ABP News and BJP leader Sambit Patra have been trying to propagate false propaganda and actions declaring protesting farmers as terrorists without any evidence. In this context, he has sought directions to the aforementioned for prohibiting the same and also directions for release of only news "without resorting to any comments about the incidents".

He has also sought for directions that an FIR be registered against ABP news and Sambit Patra under sections182 and 211 of IPC and to prosecute them in according to law "in the interest of justice".

A lawyer, Vineet Jindal has written to the Chief Justice of India, requesting him to take suo motu cognisance of the violent incidents that shook Delhi on India's 72nd Republic day. The letter states,

"By taking different route, the protesters reached the most prominent areas of Delhi, thus breaching the security conduct for the national day, and reached Red Fort where some of the people hoisted religious flag , where only National Flag is hoisted by the Prime Minister of India which caused worldwide national embarrassment for our country."

In this context, the lawyer highlights that the incident also led to a vulnerable state of security in the capital on this special day. "Hoisting a religious flag, other than our national flag is also against the integrity and unity as laid by the constitution of India . Such activities hurt the secular spirit of the citizens of our country and also account to disgrace of our national flag and constitution of India," he adds.