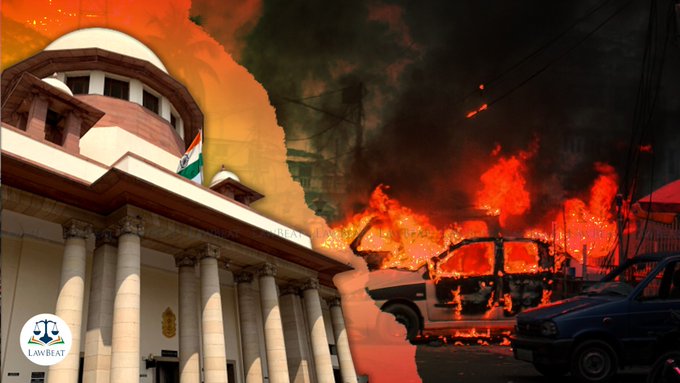 The Supreme Court on Monday deferred hearing in a plea seeking an investigation into alleged inaction of state police during the recent incidents of communal violence in Tripura stating that despite the gravity and sheer magnitude of the incidents, no concrete steps have been taken by the police against the miscreants and rioters.

A bench of Justice DY Chandrachud and Justice Dinesh Maheshwari allowed time to Advocate Prashant Bhushan appearing for the petitioner to file a rejoinder while listing the matter for hearing on January 31, 2022.

Advocate Prashant Bhushan appearing for the petitioner submitted, "a reply has been filed by the State, we will file our counter."

Commenting upon the affidavit filed by the State of Tripura, Bhushan said,

"This reply seems like a news channel whataboutery, It is totally unbecoming of a State to involve in such whataboutery."

The State of Tripura through its affidavit in the matter had informed the Supreme Court that the plea in the Tripura Violence matter is a clear case of selective public interest to achieve an oblique purpose and setting a dangerous precedent.

The State argued that it is surprising when a series of pre-poll and post-poll violence took place in West Bengal, that so-called public-spirited person didn't move any such plea's and has suddenly their public spirit aroused due to some instance in a small State like Tripura.

The affidavit further added that the petition is also the result of and is based upon such self-serving "report" titled- "Humanity under attack in Tripura - #Muslim Lives Matter" which is unilateral, exaggerated and distorted version of incident in the State.

The petition has been filed by Advocate Ehtesham Hashmi through Advocate Prashant Bhushan stating that no arrests have been made by the police of persons who were responsible for desecrating mosques or vandalising shops and delivering hate speeches targeting the Muslim community.

The plea further states that , "Instead of taking adequate steps to prevent the hate crimes that took place over a period of ten days or providing adequate relief to the victims thereof, the Respondents were hand in glove with the perpetrators of the aforementioned hate crimes."

It was also submitted that, "The Petitioner in the capacity of an advocate had personally visited the places where the aforementioned hate crimes were committed to publish a fact-finding report."

The said report was published on November 2 by the Petitioner and three other lawyers. The following findings were inter-alia published in the report:

a) 12 Mosques were damaged

b) 9 shops owned by Muslim businessmen were damaged

The plea alleges that, "Muslims are openly targeted by rioters and no protection has been extended to them by the Respondents and no arrests of said rioters has been made by the police authorities."

It states this alleged conduct of the police is arbitrary and mala fide and it affects the victims' right to justice.

Cause Title: Ehtesham Hashmi Vs. Union of India & Ors.