"Whatsapp Has Played A Fraud Upon It's Users": Plea In SC Seeks Prohibition on Sharing Data Of Whatsapp, Facebook Users 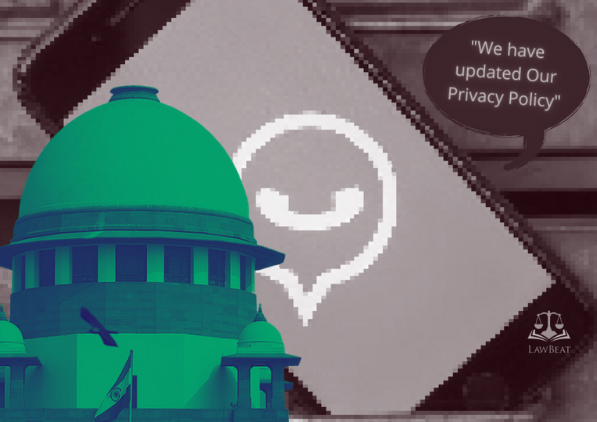 A plea has been filed in in the Supreme Court seeking issuance of directions to the Union for prohibiting Whatsapp & Facebook from sharing details and data of subscribers/users of Whatsapp with any entity including Facebook or its family of companies.

As an interim prayer, the Confederation of All India Traders urges the Top Court to issue directions viz. Union of India, to urgently intervene and frame guidelines for governing large technology companies (like Whatsapp & Facebook) and further, seeks directions to Whatsapp to roll back its updated privacy policy.

The petitioner contends that WhatsApp has played a fraud on the users as the users could not have reasonably anticipated that by selecting a pro-privacy messaging services based on a ‘no change policy’ of WhatsApp, they would subject their data to third-party applications in future. That due to strong presence and network effect of WhatsApp in the market, several users are left with no option but to compromise on their privacy, the plea reads.

It is contended that the present Petition raises issues of grave concern for protecting the Privacy of users of "WhatsApp", which is an internet application providing internet messaging, voice calling & video calling service. WhatsApp is a zero-priced communication platform used for exchanging text messages; make audio calls; make video calls; share images; share video and audio clips; share all other types of data.

Further, highlighting that the updated policy is violative of the statutory scheme, envisaged under the IT Act, 2000

"In this regard, we draw the attention of this Hon’ble Court to Section 72, which makes obtaining personal information without the valid consent of the users, a penal offence. Furthermore, under the Information Technology (Reasonable Security Practices and Procedures and Sensitive Personal Data or Information) Rules, 2011, the Government has made its intention clear in making consent the central point of data sharing and data protection. Rule 5 & 6 deserve special attention as they ensure that the body-corporates providing internet-based messaging services such as the WhatsApp must make full and true disclosure of the effect and consequence of their ‘Privacy Policy’ and must also seek meaningful consent from the users before collecting and sharing their sensitive data with third-party applications"

The petition has also drawn corollaries with the European region's privacy policy adding that the same does not apply there. In this context, it is stated that the reason for the same is the strict provisions of the European Union’s General Data Protection Regulation and the imposition of multimillion-dollar fines against such arbitrary privacy policies.

"the updated privacy policy would adversely impact citizens’ fundamental right of privacy and the same is also fundamentally opposed to their representation in the beginning, when people started to opt for using whatsapp on the basis of privacy policy. Today, high government officials like Ministers & Members of Parliament, Judges, Senior Bureaucrats, Defence Personnel and Crores of Traders and well known Businessmen and so on use whatsapp for sharing confidential and personal information and the compromise in privacy policy would result in serious repercussions even for the National Security of India,"
- Excerpt of Plea

In this background, the plea has sought issuance a writ of mandamus or any other writ or direction in the nature thereof. directing the Union of India or any other appropriate authority to discharge their executive, statutory and all other obligations in relation to protection and safety of privacy of details / data of every kind of the subscribers / users of WhatsApp all over the territory of India by taking all necessary steps / actions in discharge of their executive as well as statutory functions including by framing rules / regulations / guidelines for the protection of rights of citizens including the safeguarding and securing the privacy of citizens by ensuring that mobile application providers such as Whatsapp and other internet based messaging services do not compromise, share and/or exploit the ·information and data including messages, audio, video and other information of users in any manner.

A further prayer seeks directions upon Union of India to take all actions, including steps towards making Rules under Section 87 of the Information Technology Act, 2000 so as to regulate the functioning of Whatsapp and Facebook other similarly placed internet based messaging services including their Privacy Policy for handling of or dealing in personal information .including private messages / photos / conversations / audio messages / videos / documents & data so as to ensure that the privacy rights of the users are not compromised and are duly protected.

Inter alia, it is also prayed that both whatsapp and facebook are restrained from discontinuing availability of Whatsapp's service to all  those users who do not respond to the so-called Consent being sought by Whatsapp for changing the privacy policy and the Whatsapp service must continue for all such users till the adjudication of the present writ petition.