Cut-off date of 15 August 1947 is reflection of colonial continuity- an antithesis to constitutional norms of equality & fairness| Subramanian Swamy's take on Places of Worship Act, 1991 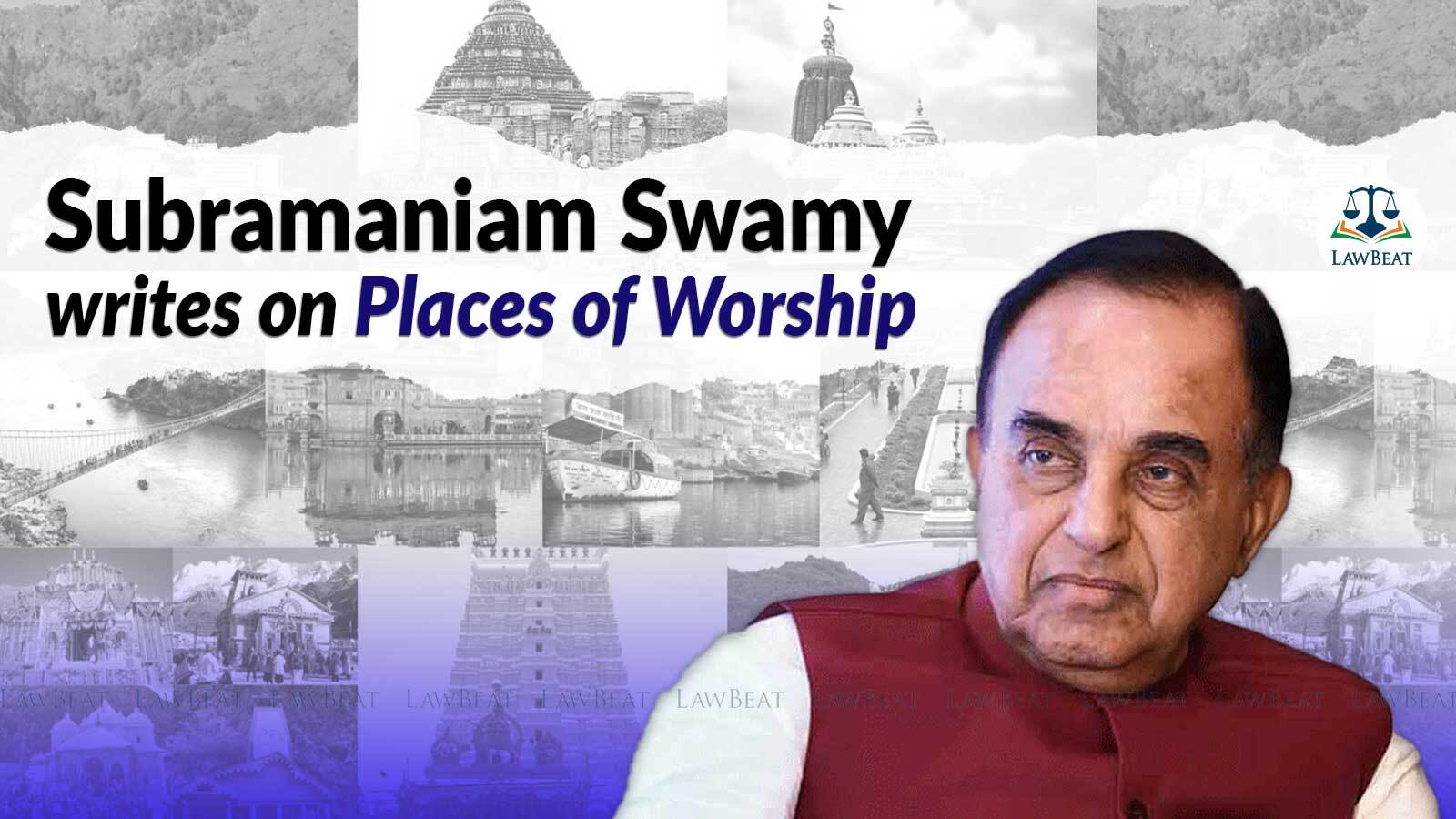 Recently, a local court based in Varanasi had ordered that an ablution tank in the Gyanwapi complex be sealed amid reports that a Shivling has been found in it. In the shadow of this case, many news articles have appeared examining the socio-political consequences of the Places of Worship Act – an Act that bars conversion of places of worship if it existed on August 15, 1947 with an exception of Ramjanmabhoomi on which Babri Masjid once stood. The purpose here is to consider the constitutional issues concerning the Places of Worship (Special Provisions) Act, 1991 (hereinafter referred to as “PoW Act”).

To begin with, we shall consider a few Sections of the Act.

Whether Section 3 of the PoW Act that bars conversion of places of worship that existed on August 15, 1947 is constitutionally valid? If so, will restoration of Gyanwapi Shiva Temple be barred by this Act?

The aforementioned provisions of the PoW Act, however, are open to two objections grounded in principles of the Indian constitutional law.

First, before embarking upon the arguments, it would be appropriate to take a close look at the text of Article 13(2) of the Constitution:

“The State shall not make any law which takes away or abridges the rights conferred by this Part [Part – III] and any law made in contravention of this clause shall, to the extent of the contravention, be void.”

This, in effect, means that any legislation that Parliament passes must comply with the Constitution’s fundamental rights chapter. Therefore, the Places of Worship Act – an Act to prohibit conversion of any place of worship and to provide for the maintenance of the religious character of any place of worship as it existed on the 15th day of August, 1947 must comply with relevant Articles of the Constitution.

The moot point, therefore, is about the existence of constitutional rights that protect individuals and communities from discriminatory legislation. The significance of rights placed under Part III lies in the fact that the citizens can approach the court if a law is passed violating the right, to make its effect null and void. This inference is derived from a combined reading of Articles 32 and 13(2) of the Constitution. The PoW Act and in particular Section 4, however, takes away citizens’ right to approach the court, resulting into violation of the Constitution.

The right at issue can be found in at least three articles of the chapter on fundamental rights as well as in the Preamble.

“The State shall not deny to any person equality before the law or the equal protection of the laws within the territory of India.” (Article 14)

“... all persons are equally entitled to freedom of conscience and the right freely to profess, practise and propagate religion.” (Article 25)

Every religious denomination, or section, had the right to mange its own affairs in matters of religion. (Article 26)

For the purpose of our first contention, we are not concerned with Article 14. It will, however, form the part of our second contention.

The basis of our first argument lies in Articles 25, 26, and the Preamble read with Articles 32 and 13(2) of the Constitution.

The position of Indian Constitution based on a catena of Supreme Court judgments is that fundamental rights cannot be altered by any law passed by Parliament. The Supreme Court in its dissenting opinion, in Sajjan Singh Vs State of Rajasthan made it clear that the nature of rights guaranteed under Part III cannot simply be envisaged as mere “playthings of a special majority.”

This is to say, that an Act passed by the Parliament – the Places of Worship Act, in this case – cannot annihilate my fundamental right of freedom of worship enshrined under Articles 25 and 26, as well as text of the Preamble, and the judicial review thereof.

A convincing argument can be made that the PoW Act is discriminatory for two reasons: (i) it leaves out other – but of similar essential importance such as the birthplace of Lord Krishna in Mathura or Lord Shiva's Jyotirlinga in the Gyanwapi premises – religious sites from being reclaimed by the community which, it believes, are occupied by another; (ii) the cut-off date of 15 August 1947 is arbitrary.

The Supreme Court in Royappa held that “equality is antithetic to arbitrariness. In fact, equality and arbitrariness are sworn enemies; one belongs to the rule of law in a republic while the other, to the whim and caprice of an absolute monarch. Where an act is arbitrary it is implicit in it that it is unequal both according to political logic and constitutional law, and therefore violative of Article 14.”

What is at issue here is the content of Article 14. Under the two-pronged Article 14 test, first settled by the Indian Supreme Court in Anwar Ali Sarkar is that any legislative classification that provides advantages and disadvantages on a differential ground, will be unconstitutional:

(a) if there is no intelligible differentia between the classification made, which distinguishes those that are grouped together from those that have been excluded;

(b) if that differentia does not have a rational relation to the object sought to be achieved by the statute in question.

Keeping this in mind, we argue that Section 5 of the PoW Act fails to satisfy the conventional classification test of Article 14.

A combined reading of Section 4 and 5 makes it apparently clear that the Act makes an arbitrary eligibility criteria for religious sites to be reclaimed by the group which, it believes, are occupied by another. It allows, by the way of Section 5, only the hitherto Shri Ramjanbhoomi Temple dispute to be reclaimed. The classification made under the PoW Act leaves out several other religious sites having similar essential importance (such as the birthplace of Lord Krishna in Mathura or Lord Shiva's Jyotirlinga in in the Gyanwapi premises.)

Taking into account these exclusions, one may refer to “maintenance of secular fabric of the nation” and that such classification is made to avoid litigation and communal conflicts. However, such a classification is not based on an intelligible differentia for two primary reasons, and therefore unconstitutional.

First, the exception made in favour of Shri Ramjanbhoomi presumes the rights of the parties attached to the Ayodhya dispute more equal and holier than the rights of similarly placed parties in relation to other religious sites. This is a classic case of unequal treatment, within the territory of India, who are placed in a similar situation and therefore goes against the basic tenet of Article 14, which mandates that ‘equals should be treated equally’.

Second, the classification is devoid of any factual basis and based on a premise that the termination of legal proceedings for reclamation of religious sites other than Shri Ramjanbhoomi will ease communal tension in the country. Needles to say, a routine law and order situation cannot be the basis for suspension of a constitutional right.

For these reasons, the classification is offensive and not based on an intelligible differentia. Considering that the classification fails to conform with the intelligible differentia test; it may next be argued that the object of the Act bears a rational nexus with the differentiation it has created – the second prong of the test. This counter argument, however, will not pass the scrutiny for two reasons (i) in Subramaniam Swamy Vs CBI, the Supreme Court has added another prong to the rational nexus requirement, by observing that the object that the statute seeks to achieve should itself be legitimate. That is to say, a discriminatory classification cannot be justified on the ground that it has a rational nexus with the aim that the statute seeks to achieve; (ii) as per the four-pronged test of proportionality, the State is required to demonstrate that its restriction placed on the fundamental right is narrowly tailored to achieve the goal, or at the very least, is important enough and proportionate to the intended goal.

Additionally, the cut-off date of 15 August 1947 is a reflection of colonial continuity. The Constitution – in the words of Granville Austin – was “a social document.” It was a transformative document. A document meant for course correction. The cut-off date made under the PoW Act, on the other hand, views Independence and Constitution as a colonial continuity – an antithesis to the constitutional norms of equality and fairness, henceforth arbitrary.

For the reasons discussed above, the Places of Worship Act can be declared as unconstitutional. Alternatively, the PoW Act can also be deleted from the laws by a Bill moved in Parliament for repeal and passed by both Houses of Parliament.

(Subramanian Swamy is a former Professor of Economics at Harvard University and IIT Delhi. He was Union Cabinet Minister for Law & Justice (1990-91), and a Member of Parliament for six terms since 1974.)

(Vaidushya Parth is reading for a law degree at Narsee Monjee Institute of Management Studies (NMIMS) School of Law, Mumbai. He is a Law Intern of Subramanian Swamy.)