Fake Spy Scandal: Story Of A Veteran Rocket Scientist Who Was Hounded & Persecuted In A Fictitious Case 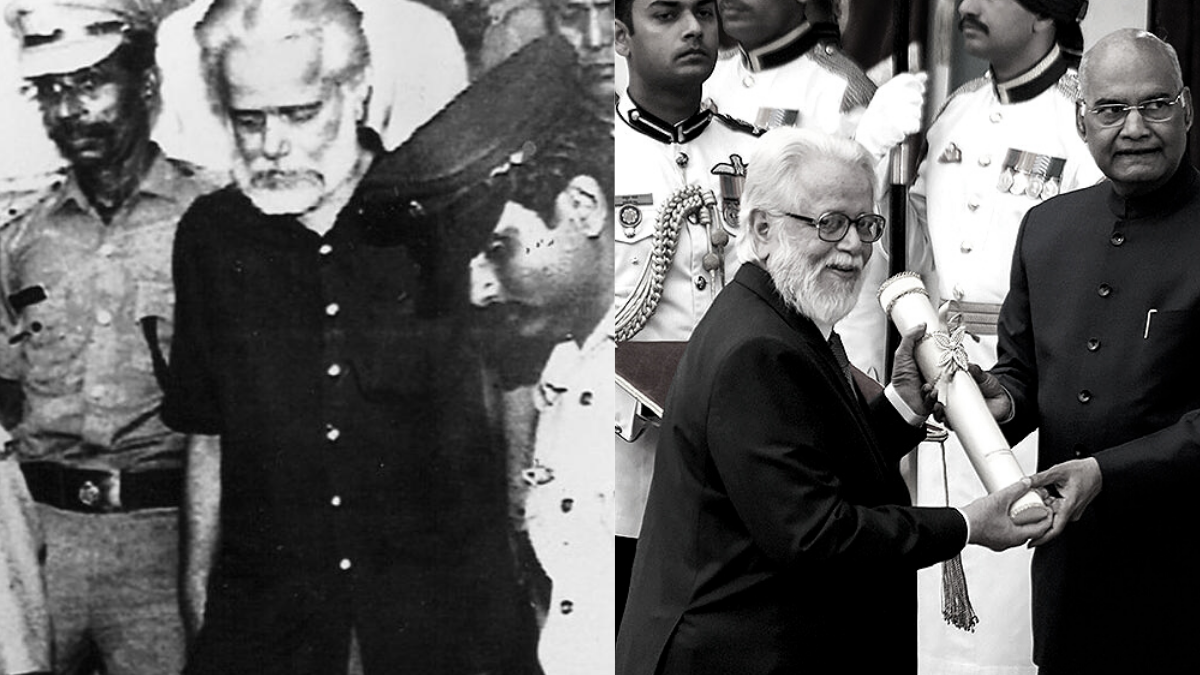 S. Nambi Narayanan is a Padma Bhushan Awardee (2019) and a celebrated scientist, credited with playing a key and instrumental role in the development of the Vikas Engine, that was used for the first PSLV that India launched. As a senior official, he was also incharge of the division.

All of this changed on 21st November 1994, when Narayanan, along with D. Sasikumaran, was accused and subsequently arrested under charges of espionage after Mariam Rasheeda, a Maldivian National, allegedly made certain "confessions" that lead to the filing of a crime report under Sections 3 and 4 of The Official Secrets Act. The scientist was arrested during the Congress regime in Kerala.

Following this, Narayanan was remanded to 50 days custody  where he alleged, he was tortured by officers of the Intelligence Bureau (IB). He further alleged that the officials wanted him to make accusations against the top officers of ISRO and that two IB officials had asked him to implicate A. E. Muthunayagam, his boss and the then Director of the Liquid Propulsion Systems Centre (LPSC). When he refused to comply, he was tortured until he collapsed.

On 4th December 1994, the case was transferred to CBI for investigation. In its report submitted before the Chief Judicial  Magistrate, the CBI stated that the charges against the scientists were false. The report further noted the failure on part of the investigating team and officers to properly discharge their duties or verify the facts.

The CBI’s report was accepted and on 2nd May 1996, the accused were discharged.

The ordeal for Dr. Narayanan was not yet over, as, dissatisfied with the CBI report, on 27th June 1996, the State Government of Kerala withdrew the case from CBI and decided to conduct a re investigation into the case to be handled by the State Police.

This notification of the State Government was challenged by the appellants before the High Court of Kerala, who upheld it in O.P. No. 14248/1996-U.

“…We are constrained to say that the issuance of the impugned notification does not comfort with the known pattern of a responsible Government bound by rule of law. This is undoubtedly a matter of concern and consternation…”

The court had also also severely remanded the Kerala Government on their assumption of guilt and their pursuit to prove that assumption even when the investigating authority of their choice came to a contrary conclusion. The court affirmed that once issued, initiation of the CBI to conduct an investigation cannot be subsequently withdrawn, and that after the submission of a police report, the police have the right to investigate further, but can not ‘re-investigate’ or instate fresh investigation.

Even after the court’s order and the findings of the CBI report, the Kerala High Court did not take any action against the erring police officers.

In 2001, the National Human Rights Commission ordered a compensation of Rs.10,00,000 as interim relief to the appellant, who had sought Rs.1,00,00,000/- (Rupees one crore only) as damages and a division bench of the Kerala High Court ordered the government to pay the appellant within three weeks of the said order.

In his pursuit of justice, Narayan filed a case in Supreme Court against his tormentors. In 2018, taking into consideration the facts of the case, Narayan’s own testimony and the CBI report, the court said,

“there can be no scintilla of doubt that the appellant, a successful scientist having national reputation, has been compelled to undergo immense humiliation. The lackadaisical attitude of the State police to arrest anyone and put him in police custody has made the appellant to suffer the ignominy”

The court also awarded Narayanan a compensation of Rs. 50 Lakhs (while allowing him to file a civil suit claiming a greater amount) and directed the formation of a three-member committee under Justice D.K Jain.

In April of 2021, after a span of almost two and a half years, the committee finally submitted its report, the details of which remain unknown.

Narrating the sequence of events that led to an attempt of framing a distinguished scientist Nambi Narayanan, the Centre had urged for taking strict action against those police officials who had attempted to do so in light of recommendation, if any in the Report.