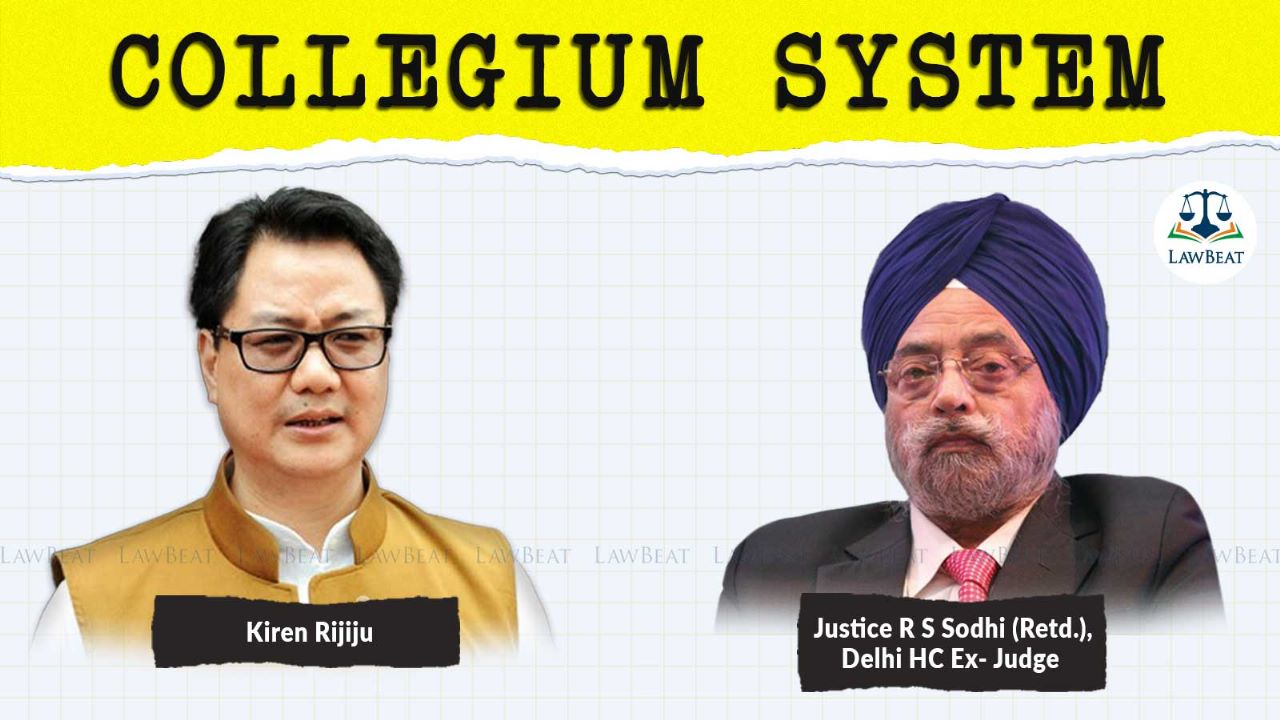 The Law Minister's remarks came just days after the Supreme Court Collegium, led by Chief Justice of India (CJI) DY Chandrachud, made public both its reasons for reiteration and the government's objections to the appointment of at least three advocates as High Court judges in an unprecedented move.

In the midst of the ongoing squabble between the Centre and the Judiciary over the collegium system for appointing judges, Union Law Minister Kiren Rijiju on Saturday cited an interview of Justice RS Sodhi (Retd.), Ex-Delhi High Court Judge, on his Twitter handle.

Sodhi in his interview with the Editor of ‘Law Street Bharat’ had said that "for the first time, the Supreme Court has hijacked the Constitution to the extent that they (the Judges) have decided to appoint themselves, negating the role of the government".

“Can you amend the Constitution? Only the Parliament will amend Constitution. But I feel the Supreme Court for the first time has hijacked the Constitution and after the hijacking, they (SC Judges) said that they will appoint Judges themselves and the government will have no say/role in it,” the retired High Court judge had remarked.

Rijiju referred to the interview and tweeted: “Voice of a Judge... Real beauty of Indian Democracy is- its success. People rule themselves through their representatives. Elected representatives represent the interests of the People & make laws. Our Judiciary is independent and our Constitution is Supreme.”

He further tweeted, “All the three organs of our State i.e. Legislature, Executive, and Judiciary must work together in the larger interest of the nation.”

Sodhi in his interview had said, “The High Courts are not subservient to Supreme Court. HCs are independent bodies of respective states. Now, what is happening? SC is appointing HC Judges, and where do SC Judges come from? HC only. Hence, HC Judges have started looking towards SC all the time and become subservient…Now the SC is transferring judges, and appointing judges. The HC has become a subordinate of the SC and the Constitution of India never said this.”

When asked as to who will decide the appointments and between the government and the Supreme Court, which one is on an upper peddle, Sodhi had replied, “If there is a deadlock between the government and the Supreme Court, who is the ultimate appointing authority? The President of India (POI). The POI will have to decide on the opinion of the council of ministers. Therefore as per me, the Parliament is Supreme.”

It is to be noted that last week, Rijiju clarified that his letter written to the Chief Justice of India, DY Chandrachud for the inclusion of government representatives in the Supreme Court collegium was a 'precise follow-up action' of the direction of the Supreme Court.

Refuting the allegations raised by the leaders of the parties in opposition that the current dispensation is trying to seek government interference in judicial appointments, Rijiju said that in its 2015 judgment, the Constitution Bench of the Top Court had itself directed for restructuring of the Memorandum of Procedure (MoP) of the collegium.

Apart from that,  while giving an interview to ‘News On AIR’ (All India Radio) on being asked where the current collegium system lacks and how the reform will improve the system overall, the Union Law Minister Kiren Rijiju said that 'Collegium' duties are taking away the precious time of Judges and that the Judiciary is fully involved in the appointment process.

The judiciary is fully involved in the appointment process. That is why I have stated that pendency of the cases is somehow related to the strength of the judges and also the collegium system has in a way taken away the precious time of the judges of the High Court and Supreme Court,” he said.

Furthermore, in November, Rijiju spoke with India Today about the Indian judiciary and collegium system at a Conclave in Mumbai. He had said,

"Constitution is very clear that the President has to appoint the Supreme Court and High Court judges in consultation with the Chief Justice of India. The Constitution is supreme but when the Supreme Court struck down the National Judicial Commission Act 2015 we respected it and did not act on it but that does not mean we will be silent forever. We don't want to show anything which will portray us in a situation where there is a confrontation with the judiciary and the government is not in terms of the judiciary. We are on good terms with the judiciary and judges know that the law minister is not against the judiciary or judges. We are part of the same team and three different organs of the same state".

The minister while expressing his views on the Collegium System and appointment of judges had said that:

“I am not satisfied with the present collegium system and the majority of the judges agree with me and that is a fact. I am not saying anything contrary to their beliefs. If you are a consultee judge in the collegium then the basic fault in the system is that you will recommend those names who are acquaintances to you and who are known to you. You will not recommend someone who you don’t know. The fault in the system is that you don’t recommend them even if he is a qualified, fit, and, good judge for the High court and Supreme Court. The fittest of the person should be elevated and not the person who you know”.

The Minister while making a contrasting observation about the global judicial appointments as opposed to the Indian Judicial System of appointment had questioned, "Should Judges spend more time on delivering justice to the system or should they spend more time in the administrative process?”

The Union Minister had also advised the judges to not indulge in oral observation and speak through their orders. He had said, “A judge should speak through his judgment. Oral observations have no bearing. My advice is- don’t come into a situation where you will invite criticism. Whatever you have to do, do it with your order.”