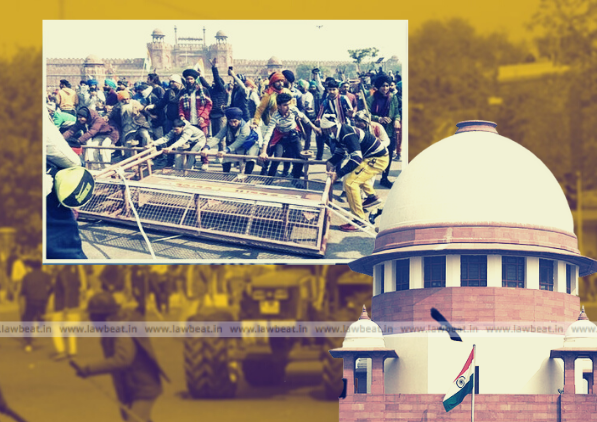 The Supreme Court on Tuesday, while refusing to intervene in the violent incidents that took place in the capital on India's 72nd Republic day, observed that a press statement by the Prime Minister has revealed that the law will take it's due course.

A Writ petition had been filed by Swati Goel Sharma and Sanjeev Newar seeking intervention of the Top Court directing the National Investigative Agency to conduct an investigation into the Tractor Rally violence that engulfed the capital on India's 72nd Republic Day.

Filed through Advocate Shashank Shekhar Jha & AOR Manu Jetley, the plea alternatively seeks issuance of directions for constitution of a judicial commission headed by a retired judge of the Supreme Court or a Special Investigation be constituted, monitored by the Top Court.

Additionally, the petitioner(s) have prayed for directions upon the Union of India and the State of NCT Delhi to remove the protestors from Delhi as well as, from its borders.

On India's 72nd Republic day just two days ago, protestors vandalised the national capital, steering away from the designated route of the Tractor Rally. A number of protestors also entered the landmark monument of Red Fort and unfurled a religious flag in its vicinity. There were a number of reports, of public property being damaged in the capital.

An advocate named Vishal Tiwari also moved to the Apex Court of India seeking constitution of a Judicial Commission for Inquiry into the violent incidents which took place on 26th January, 2021 in the capital city of India during the protesting farmers Tractor March.

A law student, Ashish Rai from Mumbai University wrote to the CJI on the morning January 27, a day after the capital saw violence and vandalism on India's 72nd Republic day.

Rai stated in his letter,

"Through this letter, I would like to make a humble request to the Hon'ble supreme court that the tractor rally was organised by a group of farmers on the 26th of January 2021. The event has been terrorised by some anti-social elements in which a large number of public property of the country has been damaged and due to tampering with the country's heritage Red Fort."
- Rai states in his letter

Advocate ML Sharma has filed a petition stating that the Centre along with certain news channels such as ABP News and BJP leader Sambit Patra have been trying to propagate false propaganda and actions declaring protesting farmers as terrorists without any evidence. In this context, he has sought directions to the aforementioned for prohibiting the same and also directions for release of only news "without resorting to any comments about the incidents".

He has also sought for directions that an FIR be registered against ABP news and Sambit Patra under sections182 and 211 of IPC and to prosecute them in according to law "in the interest of justice".

Another lawyer, Vineet Jindal has also written to the Chief Justice of India, requesting him to take suo motu cognisance of the violent incidents that shook Delhi on India's 72nd Republic day. The letter states,

"By taking different route, the protesters reached the most prominent areas of Delhi, thus breaching the security conduct for the national day, and reached Red Fort where some of the people hoisted religious flag , where only National Flag is hoisted by the Prime Minister of India which caused worldwide national embarrassment for our country."

In this context, the lawyer highlights that the incident also led to a vulnerable state of security in the capital on this special day. "Hoisting a religious flag, other than our national flag is also against the integrity and unity as laid by the constitution of India . Such activities hurt the secular spirit of the citizens of our country and also account to disgrace of our national flag and constitution of India," he adds.