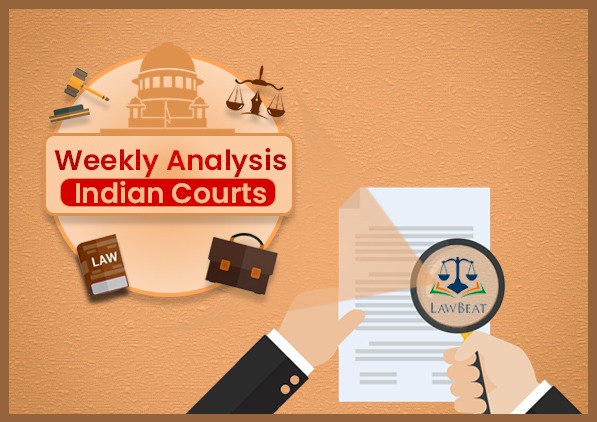 "Weekly Analysis: Indian Courts" is Lawbeat's new segment delving into important legal developments that ensued in India. It highlights important issues of the Indian Legal System of the week objectively and with a magnified legal lens.
[January 18 to January 23, 2021]

What made Headlines from the Supreme Court of India this week?

1. Chief Justice SA Bobde made scathing remarks against "branding" people for their opinions while hearing cases concerning the farm laws and ensuing protests. "Why Malign People For Their Opinion?", CJI SA Bobde said, while taking strong objection to aspersions cast upon Court-constituted Committee for purposes of effectuating consultation between protesting farmers and the Central Government. Top Court was hearing a petition filed by Kisan Mahapanchayat, seeking reconstitution of the panel after the recusal of Bharatiya Kisan Union (Mann) leader B S Mann. Bench issued notice on the application and sought the Centre's response on the same.[Rakesh Vaishnav & Ors. V. UOI & Ors.]
What to expect in the next hearing? The Centre is expected to file it's reply to the aforementioned application. The Solicitor General had, on the last date, agreed with the Chief Justice's strong objections against those casting casting aspersions on the constitution of the Committee. Centre had also asked the Centre to withdraw the plea seeking intervention of the Court to halt the impending tractor rally in Delhi.
Bench: Chief Justice SA Bobde, Justices LN Rao & Vineet Saran

2. Additional Solicitor General Aishwarya Bhati informed Supreme Court that Delhi was one of the most habitual offenders so far as Yamuna Pollutants were concerned. She added that a status report to this effect will be filed before the next date of hearing. The bench was hearing its suo motu case titled "IN RE: Remediation of River Pollutants". Amicus Curiae Meenakshi Arora submitted that to effectuate furtherance of the issues in the present case, it would be highly beneficial if a detailed report from the Committee named "River Yamuna Monitoring Committee" appointed by National Green Tribunal be called upon and looked at by Court.
What to expect in the next hearing? The top court has directed the Committee as aforementioned to submit a report regarding recommendations made for improvement of water in the River Yamuna and the extent to which this recommendation has been implemented. The Centre is also expected to file it's report.
Bench: Chief Justice SA Bobde, Justices LN Rao & Vineet Saran

3. The Solicitor General informed Supreme Court that the Governor of Tamil Nadu will decide on whether to release Rajiv Gandhi assassination convict, AG Perarivalan in a few days. Perarivalan had applied to the Governor for pardon on December 30, 2015, following which the Supreme Court deemed it fit for the Governor to proceed with it. The decision is still pending.
What to expect in the next hearing? With the Centre informing Court that the Tamil Nadu's Governor will shortly decide on Perarivalan's pardon in a short while, this issue is expected to soon come to a close. [A.G. Perarivalan V. Union of India]
Bench: Justices L Nageswara Rao, S Abdul Nazeer and Indu Malhotra

4. Top Court formulated a Committee of experts too look into the delays concerning criminal trials across courts in the Indian legal system. The bench passed the order after Senior Advocates Siddharth Luthra and R Besant (Amicus Curiae) informed Court that they have submitted draft rules on criminal practice. Bench was hearing it's suo motu case titled "In Re: To Issue Certain Guidelines Regarding Inadequacies And Deficiencies In Criminal Trials".
What to expect in the next hearing? Luthra had informed the Court today that they had only received responses from Andhra Pradesh, Karnataka, and Telangana High Court. "20 High Courts have chosen not to respond even after we held consultations," he added. The CJI led bench also directed all High courts to submit reports to the aforementioned Committee thus constituted and listed the case after 4 weeks.
Bench: Chief Justice SA Bobde, Justices LN Rao & Vineet Saran

5. The Supreme Court issued notice in a PIL filed by a resident of Mirzapur seeking a ban on the web series Mirzapur 2, hosted on the OTT platform Amazon Prime Video. A bench of Chief Justice SA Bobde, Justices AS Bopanna & V. Ramasubramaniun issued notices to the makers of the show as well as the OTT platform Amazon Prime.The PIL filed by Sujeet Kumar, a Mirzapur resident states that the web series has completely tarnished the historical and cultural image of the city/district. [Sujeet Kumar Vs. Union of India]
What to expect in the next hearing? The Supreme Court issuing notices on the makers and the OTT platform. Appearances on the behalf of Respondent's are expected to be entered.
Bench: Chief Justice SA Bobde, Justices LN Rao & Vineet Saran

6. The Supreme Court on Monday has it clear that the cases seeking transfer of the Palghar Sadhu Lynching issue will not be adjourned further. The bench was informed by one of the intervenors that some time is sought for filing additional documents. This was opposed by one of the parties who said that, "Even if ultimately it is transferred to another investigating agency, then with passage of time, the materials which the local police may have collected will be destroyed". The Top Court was hearing a plea by advocate Shashank Shekhar Jha alleging police complicity in the incident of lynching effectuated against two Seers in Palghar, Maharashtra and demanding a probe either by a judicial commission or the Central Bureau of Investigation (CBI) into the incident.
What to expect in the next hearing? The Top Court has fixed the date of hearing in this case to February 25.
Bench: Justices Ashok Bhushan, BR Gavai & MR Shah

1. Supreme Court has upheld the constitutionality of provisions of the Insolvency & Bankruptcy (Amendment) Ordinance, 2019.

2. A full judge bench comprising Justices AM Khanwilkar, BR Gavai and Krishna Murari recently granted bail to an undertrial who had been in jail for over 12 years. The bench noted,“We are appalled to notice that the appellant is in jail in connection with the crime registered by FIR No. 226 of 2009 for more than 12 years and the trial is still not concluded.” The undertrial had been in jail for 12 years booked for murder and granted bail to the undertrial "in the interest of justice". [Rakesh Mishra Vs. Union of India]
Statute/ Point of Law Involved: Constitutional Rights of Undertrials emanating from Parts III & IV, Seventh Schedule & Articles 19, 20 & 21

3. While issuing directions upon a petition moved by a rape survivor being denied accommodation, a three-judge bench of Justice Ashok Bhushan, Justice R. Subhash Reddy and Justice M.R. Shah has held that a rape survivor should be provided accommodation under Prime Minister Awas Yojna or any other Central or State Schemes and the minor children of the woman should be ensured free education, in any of the government organisations till they attain the age of 14. [Ms. X v. State of Jharkhand]
Statue/Point of Law involved: Article 14, 15(3)

4. The Supreme Court recently released two convicts on probation of good conduct, in terms of Section 4 of the Probation Of Offender's Act,1958.  A bench of Justices Sanjay Kishan Kaul & Hrishikesh Roy released two convicts, who were 19 & 21 years of age at the time of commission of offence, on their completion of half the sentence. Court ordered their release on entering into a bond, with two sureties each to ensure that they maintain peace and good behaviour for the remaining part of their sentence, failing which they can be called upon to serve that part of the sentence. [Lakhvir Singh Etc. Vs. The State of Punjab & Anr.]
Statute/Point of Law involved: Probation of offenders Act, 1958, Indian Penal Code

6. A full judge bench of Chief Justice S.A. Bobde, Justice A.S. Bopanna and Justice V. Ramasubramanian has held that a prescription of higher education as a qualification for promotion cannot be held as violative of Article 14 and 16 of the Constitution. In light of the facts of the given case, Court held that a prescription of graduation as a qualification for promotion to the post of Head Assistant cannot be held as violative of Articles 14 & 16 of the Constitution. [Ashok Kumar v. State of J&K]
Statute/Law Point involved: Article 14, 16 / Classification within a homogenous class on the basis of educational qualification

1. The Calcutta High Court has laid down two crucial ratios in terms of the Domestic violence Act, 2005 on the questions of whether relief can be legally granted without being prayed for? (answering it in the affirmative) and whether an order passed under Section 29 of the Act qualify as an Interlocutory order for the purpose of Section 397 of the Cr.P.C? (answering it in the negative).

2. The Bombay High Court has held that 'media trials' during ongoing investigation of any case does impact the probe and violate the program code under the Cable TV Network Regulation Act. Court has also laid down comprehensive principles to regulate television network operations, suicide reporting, ruling that the Central Government can regulate channels in terms of the Cable Television Networks Act, 1995 & the rules thereunder.

3.  The Punjab and Haryana high Court has held that the certificate under Section 65B of the Evidence Act is a pre requisite to authenticate admissibility of Whatsapp messages.

4. The Sikkim High Court recently acquitted a man who had been convicted by a Trial Court on charges of rape, on ground of discrepancy in the FIR and the statement recorded under section 164 CRPC on one side and deposition of the victim on the other.

5. The Kerala High Court has held that a breath analyser test or any other test for detection of alcohol level is mandatory to enunciate prosecution under the Motor Vehicles Act, 1989.

7. A criminal complaint filed against a web series titled Tandav before the Chief Metropolitan Magistrate Court, Patiala House Courts, New Delhi was heard on Tuesday. The complaint has been filed by Hindu Sena Chief Vishnu Gupta alleging that in first episode of the web series, one of the accused actor Mohd. Zeeshan Ayyub has disguised himself as Lord Shiva and has stated that Lord Ram’s followers are constantly increasing on social media and that Lord Shiva’s followers should also make some new strategies to increase their fan base.