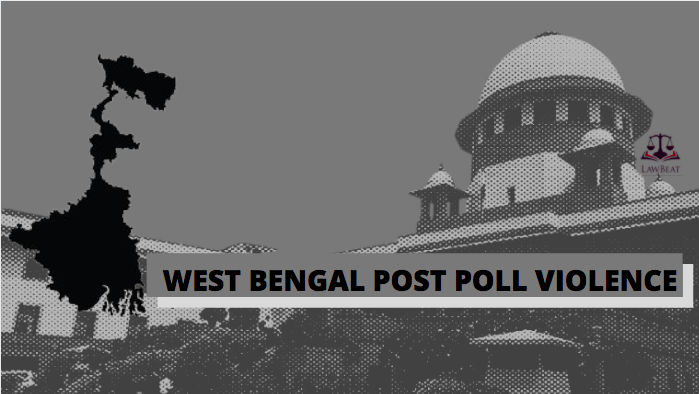 The matter was listed before the vacation bench of Justice Indira Banerjee and Justice MR Shah, however when the same was called out, Justice Banerjee said, “I have some difficulty. I cannot hear this matter”.

To this Justice MR Shah added, “We're not passing any order.Let this matter be heard before the bench of which my sister is not a part”.

The plea was preferred by Biswajit Sarkar, the younger brother of the deceased Abhijit Sarkar who was killed by a mob comprising 20 supporters of West Bengal’s ruling party in power in his mother’s presence & also by widow of Haran Adhikari, a local booth worker who was attacked with bricks, sticks, spade, shovel at his home and brutally killed in the presence of his 80 year old father.

In addition to the SIT, the plea also sought for examining the failure of the State administration which while identifying itself with this vengeful cause of the ruling political party in the State chose to turn a blind eye leaving victims of these crimes remediless.

On the last date ie June 15, 2021 while the matter was called for hearing, Solicitor General of India Tushar Mehta sought adjournment in the matter due to paucity of time and had requested for the matter to be heard on June 18, 2021 to which the vacation bench of Justice MR Shah and Justice Indira Banerjee had agreed.

In the same matter, recently two intervention applications were filed through Advocate Ravi Sharma and Advocate Shoumendu Mukherji have been moved in the matter of Biswajit Sarkar & Anr v. Union of India, seeking investigation into incidents of assault and rape, post West Bengal election results.

The First was filed by a 64 year old woman alleging that on the intervening night of May 4 and May 5, 2021, 5 ruling party members/supporters entered her house and committed acts of assault and rape, in the presence of her 6 year old grandson. Relief has been sought for impleadment in the aforementioned matter, seeking CBI/SIT probe in post poll violence and also transfer of consequent trial outside the State of West Bengal.

The second application was moved by a 17 year old minor, in which it was contended that the applicant was attacked and gang raped only for her father’s political affiliations and religious beliefs.

Earlier the bench of Justice BR Gavai and Justice Vineet Saran on May 18, 2021 had issued notice to the State of West Bengal to seek State’s response in the plea filed to which the State of West Bengal in its affidavit filed recently said that Supreme Court’s interference was not required since the Calcutta High Court had already seized the matter.

The matter would now be heard by the bench of which Justice Indira Banerjee would not be a part.