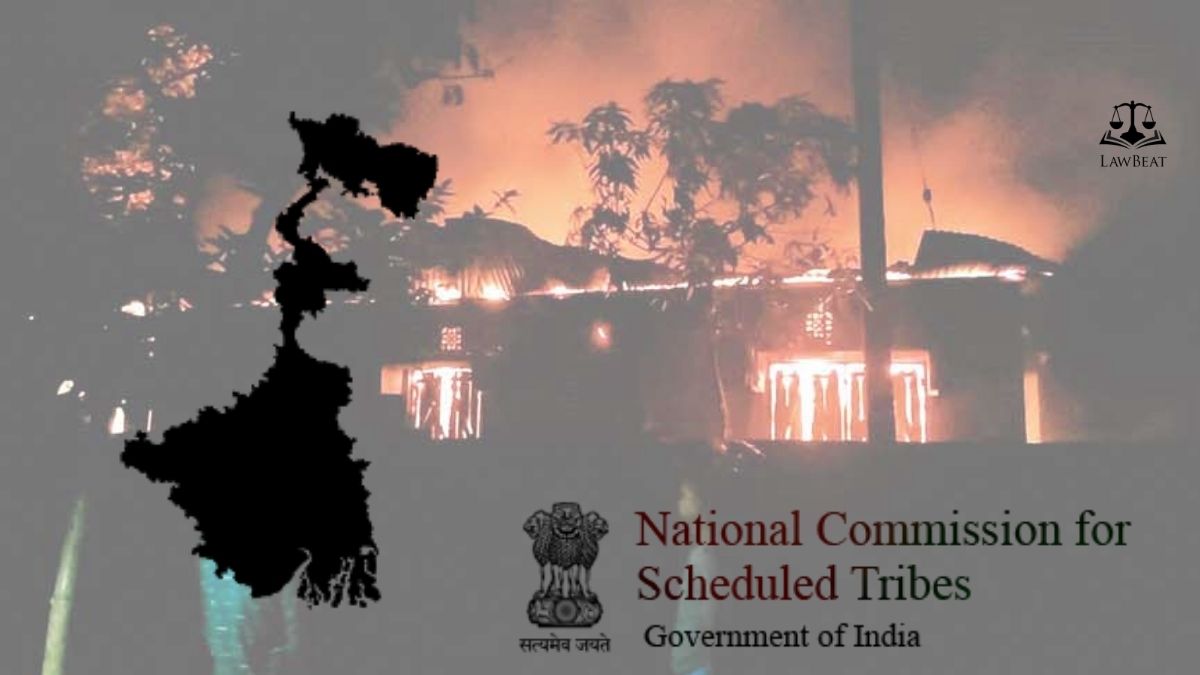 Recently, the National Commission of Scheduled Tribes (“NCST”), in its 11-page tour report concluded that the tribal communities post-poll, have been living in fear and have not been able to lodge any complaint with police or revenue officials.

Currently, the case(s) pertaining to the West Bengal Poll Post Violence are pending before the High Court of Calcutta.
The NHRC has also submitted its report as directed by the Court and has brought out glaring incidents of violence, irregularities in procedures established by law and state apathy towards its victims.

In light of these events, Lawbeat reached out to Adivasi Morcha President (Purba Bardhaman) to understand the issues faced by tribals from West Bengal on the ground.He connected us with Sunil Baksi, a BJP booth worker from Kakragram, West Bengal who had filed a complaint with the NCST stating that a mob had attacked him in the aftermath of elections on May 3rd, 2021.

On being asked whether he approached the police prior to this, Baksi said that on May 4, he approached the local PS and narrated the incidents of alleged violence against him and his family but the police refused to lodge an FIR. He further stated the incidents Of violence perpetrated against him & other villagers were very serious in nature. (Complaint with the NCST, inter alia states that the alleged goons entered his village and entered homes, destroying all utensils and furniture as well as electrical items. It adds that the alleged TMC goons molested the women and even tried to rape Baksi's wife. Around 15 houses were set on fire.)

[Note: A Constitution Bench of the Supreme Court in Lalita Kumari v. Govt. of U.P (W.P.(Crl) No; 68/2008) held that registration of First Information Report is mandatory under Section 154 of the Code of Criminal Procedure, if the information discloses commission of a cognizable offence]

He stated that after he approached the NCST with his complaint, the mob whom he identified as TMC workers told him, "the NCST will leave for Delhi but you and us will stay".

Baksi added, "After the ST Commission left, the TMC goons who belong to a particular community came on bikes with bombs and threaten us and our families, heckle us and loot our hens & goats. This is the reason why many people fled from our village and settled elsewhere. I myself left the village and come back very rarely. The goons would often take alcohol outside our community temples and ruin festivities. I would always protest against them and once I complained, they got after me."

Upon being asked whether after the complaint was filed with the NCST, the police took any action, Baksi pointed out that the Police refused to do so. His complaint states that instead of lodging a complaint and taking action against perpetrators, he was threatened by the police, whereby he was told that if they file a complaint, "the consequences would be much worse" and that he should instead choose to state that the houses were burnt down by lightening strikes.
In this context, it is pertinent to point out that the report of the NCST stressed on the fact that no tribal person has belief in local police, alleging that local police are working against them.

“Tribal people have also levied allegations of police working for a particular party. There are glaring examples which show how political goons have committed heinous crimes against tribal people due to the failure of the State machinery in safeguarding the persons and interest of tribal people ,” report noted.

It has also been stipulated in the NCST report that concerned SHO/Officer in Charge of these districts have not taken any action against the perpetrators even upon receiving serious complaints of victims or their family members.
Baksi's complaint names the accused persons. He claims that the alleged goons - Anarul Sheikh, Aamir Hossein, Haider Ali, Hasibul Mollah and  Sheikh Faizul and Sheikh Bhirali belong to the TMC.

[A letter to the Assistant Director of the NCST dated June 24, 2021, undersigned by the SP Police (Purba Bardhaman) states that the complaint forwarded by the NCST, lodged by Sunil Baksi pertained to a different jurisdiction and that it does not fall in the jurisdiction of PS Purbha Badhaman. The letter states that the complaint is thereby being forwarded to the CP for necessary action]

The Calcutta High Court is expected to hear the case(s) related to post poll violence tomorrow.

It is also not out of place to mention that cases pertaining to the post poll violence are also listed before Supreme Court.

A 64 year old woman approached the Top Court, alleging that on the intervening night of May 4 and May 5, 2021, 5 ruling party members/supporters entered her house and committed acts of assault and rape, in the presence of her 6 year old grandson.

In the second Intervention Application moved by a 17 year old minor, it has been contended that the applicant was attacked and gang raped only for her father’s political affiliations and religious beliefs.